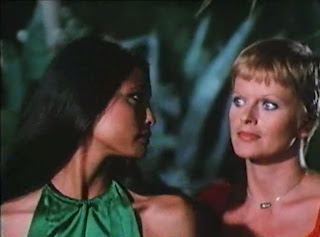 Bitto Albertini’s arthouse classic is at one and the same time a celebration of female empowerment and a searing indictment of post-colonial hypocrisy. The intricate and multi-layered narrative involves a crusading journalist who …

Okay, my wife’s left the room. Here’s the real review:

‘Black Emanuelle’ is about a photographer named Mae Jordan (Laura Gemser), known by the mononym Emanuelle, who goes to Africa on an assignment, meets bohemian writer Ann (Karin Schubert), gets into the swing of things (I use the word “swing” in all its connotations) with Ann’s groovy friends and has a lot of sex.

This probably makes ‘Black Emanuelle’ sound infinitely more entertaining than it actually is.

For a film whose raison d’etre is the naked and voluptuous figure of its leading lady, it takes half an hour – a third of its running time – for Emanuelle to get down to a full-on sexual encounter (a bit of canoodling in a car and a quick fondle in a shower notwithstanding). What we’re treated to in the interim is endless scenes of Ann and her cohorts being fashionably outrageous. These guys party hard: we’re talking J&B necked straight from the bottle and everybody jumping in the swimming pool at the end of the evening. Yeah, baby! 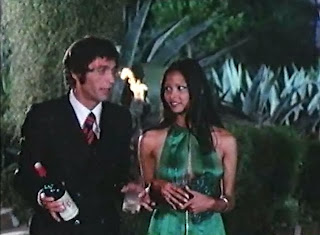 Emanuelle gets the hots for Ann’s narcissistic husband Gianni (Angelo Infanti), introduced in the following hilariously awful exchange:
Ann: This is my husband, Gianni.
Emanuelle: Are you English?
Gianni: No, I’m Italian.
Yeah: fine English name, Gianni. But then again, this is a film where Ann meets Emanuelle at the airport with the line “I expected a man”, to which Emanuelle replies “On the contrary, I’m a woman.” A statement of the obvious on par with the scene in which Emanuelle and Ann fly out to the veldt in a Cessna and Emanuelle makes the following observation: “I’ve never been in a small plane before. It’s not like a 707, is it?” And while I’m on the subject of how fucking bad the script is, let us not forget these two howlers: “that’s the fascination of Africa, it’s like an incurable disease” and “the monkey stole my toothpaste”, both of which are worthy to keep the company of “I’m not happy with the fenestration” and “I chipped my tooth on a Quaalude” in the lexicon of bog-awful movie lines. 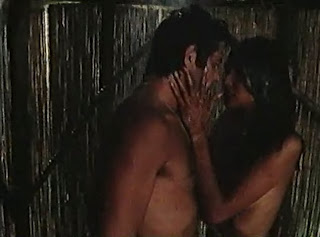 But I digress. Emanuelle takes a shine to Gianni. I would describe what ensues as the eternal triangle, except that Gianni has a history with Gloria (Isabelle Marchall), the party slut wife of Gianni’s best buddy Richard (Gabriele Tinti), which makes it more like the eternal quadrangle. Except that Ann, aware of Gianni’s philanderings, is carrying a torch for sensitive academic and musician Professor Kamau (Don Powell), so the eternal pentagon would probably be a better description. Except that Emanuelle complicates things by making out with both Ann and Gloria, which I guess makes it the eternal … Oh fuck it, let’s just call it the eternal polygon and have done with it. (Hell, if I tried to go the whole hog with this thing and factor in the hockey team gang-bang on the train at the end – don’t ask! – I don’t think I could find a shape with enough sides to fit the bill.)
Damn! I’m doing it again – I’m making this movie sound a far better prospect than is really the case.
The truth of the matter is, ‘Black Emanuelle’ is a tedious and unlovely piece of filmmaking. And there are many things that make it thus. There’s the bland cinematography which reduces the Africa landscapes to a backdrop; wallpaper. There’s the totally random editing, as if the film had been assembled by a martian with no understanding of the language of cinema or the functionality of an editing machine. There’s the misguided use of slo-mo when Emanuelle and Ann decide to take pictures of each other in the buff out in the veldt; the sight of the rather well-proportioned Karin Schubert leaping over a succession of fallen branches with whatever constitutes the diametric opposite of gazelle-like grace is almost surreal. Then there’s the general uselessness of the sex scenes. This is a big failing in a movie that’s primarily about making the beast with two backs. Emanuelle and Gianni’s trysts consist of nothing more than two naked people writhing as if in the throes of St Vitus’ Dance. 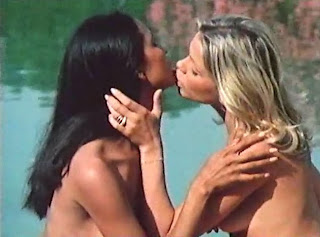 What is potentially the most erotic scenario, a languid poolside girl-girl encounter between Emanuelle and Gloria, is spectacularly de-eroticized by Albertini’s insistence on continually cutting away to a gardener and a maid spying on them. Both are sufficiently turned on to enjoy a quick fumble themselves. Problem is, the maid looks like Ugly Betty and the gardener has the kind of face your normally see in identikit photographs when the police are tracking down a child-molester. Albertini effects an even less classy bit of cross-cutting during the railway carriage gang-bang. He cross-cuts between the group sesh in second class and the lubricated and shiny piston rod plunging into and out of the cylinder box. The action is curiously reminiscent of … nah, surely not!
Okay, I’ve spent way too long on this POS. Plus that last paragraph included the phrases “languid poolside girl-girl encounter”, “quick fumble” and “railway carriage gang-bang”, none of which I envisaged using on this blog just a few weeks ago. Time to wrap this review up, I think.
I only need to mention one more thing: the music. It’s fucking horrible. The theme song, which is recycled endlessly throughout the movie, has a tuneless singer crooning “sweet Emanuelle” during the saccharine chorus, but truncating the four syllables of Emanuelle into three to fit the rhythm. This harmonically-challenged individual also displays limited capability with the English language, so that “sweet Emanuelle” comes out sounding “sweaty man well”. I spent half of this god-awful movie wondering what a “sweaty man well” actually is and coming up with some very disturbing possibilities.
I’m skipping ‘Black Emanuelle 2’ since Laura Gemser’s not in it. Tomorrow, I’ll be engaging with the first of Joe D’Amato’s franchise entries. May the god that I don’t believe in have mercy on my wretched soul just for typing this, but I’m looking to Joe D’Amato for an upgrade in quality. Joe fucking D’Amato!!!
Posted by Neil Fulwood at 9:04 PM

Tomorrow, I’ll be engaging with the first of Joe D’Amato’s franchise entries.

Stop while you still have the chance! We love you too much!

Thanks to this review I'm going to have to use the phrase "On the contrary. I am a woman." sometime in the near future.

I expect lots of confused looks.

"The monkey stole my toothpaste" is the one I'm going to be trying to drop into conversation at the office next week.