WINTER OF DISCONTENT: Emanuelle in America 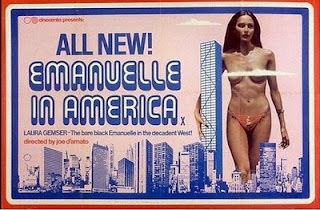 Before I get stuck into this review (or rather semi-review because, for the first time in The Agitation of the Mind’s short history, I’m writing about a film I didn’t finish watching), allow me to outline three contextual factors by way of an excuse:

1. Tim at Antagony & Ecstasy left a comment on my ‘Black Emanuelle’ review, highlighting my intention to move from the Bitto Albertini to the Joe D’Amato franchise entries. He made a simple and – as I discovered the hard way – eminently sensible exhortation: “Stop while you still have the chance!”

2. Unfortunately, at this point, I had already watched ‘Emanuelle in Bangkok’. My wife, reading my in-progress review of the film, asked a very pertinent question: “What happened to the Agitation mission statement? Only reviewing films you’re passionate about?” I hung my head in shame. Even allowing for the guilty pleasure of a Laura Gemser/Ely Galleani love scene, I had to admit that I had strayed a long way from the blog’s remit.

3. In tracking down ‘Emanuelle in America’ online, I had no luck at my usual go-to site for uncut trash movies but found it elsewhere on an allegedly free streaming site. I got thirty minutes into it before the film froze and a message box informed me I had reached my streaming limit; I could either wait an hour and then watch more, or upgrade to a premium account for $9.99.

No way was I paying to continue watching a Joe D’Amato film. In fact, I’m considering writing to whomever was appointed his executor to request that someone pay me. Nor, after what happened in the half hour I did get to see, was I in any way compelled to log back on an hour later.

Here’s how ‘Emanuelle in America’ starts. Emanuelle (Gemser) conducts a fashion shoot, during which she banters with the models. One of them complains that she’s going out with a philosopher who’s only interested in conversation not sex. Emanuelle leaves the studio, gets in her car and drives away. A guy who looks like he missed the casting call for one of the hillbillies in ‘Deliverance’ and got this gig instead rises up from the back seat and puts a gun to her head. 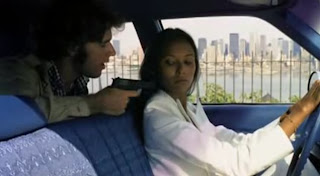 Emanuelle obligingly pulls over. There’s a bit more dialogue in which our pistol-packing friend basically infers that Emanuelle is a degenerate sex-obsessed hussy (fair enough) responsible for promoting promiscuity (can’t argue with the dude) and contributing to a climate of moral turpitude (harsh, but not without a kernel of truth) as a result of which she deserves to die (okay, pushing it a bit). Turns out this guy is the model’s philosopher boyfriend. This fucking doofus is a philosopher!!!

Next up, Emanuelle hangs out with her boyfriend, whose swinging bachelor pad is furnished with a coffee table in the shape of a Marlboro cigarette packet: 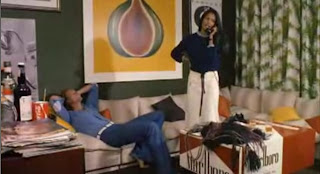 This is not classy. This makes the décor of your average giallo apartment look Art Deco. A little part of me died when I laid eyes on that table. You know what the worst thing is? The angled bit that flips back on a real cigarette packet – there’s a similar facility on this table that reveals a drinks cabinet. Yes, folks, Emanuelle is having sex with a man who owns a Marlboro coffee table/drinks cabinet combo … and who doesn’t feel the need to drape a tablecloth over it, repaint it or at least have the common decency to fucking apologise for it.

Little did I know, however, that the worst was yet to come. Emanuelle gets a tip from a buddy who runs a boxing academy that some criminally connected rich dude is running a private harem. Sensing the opportunity to get naked a lot a good story, Emanuelle hires on as one of the girls. Rich dude lives at a secluded ranch where men stand around in bad suits looking menacing and women lounge by the pool in g-strings looking like the feminist movement never happened. Each of the girls are given a chunky jewelled bracelet (70s bling: niiiice) with rich dude’s initials on it as a reminder that he owns them. Rich dude also has his initials painted on the door of his Rolls Royce Corniche. Which makes him about as unclassy as Emanuelle’s boyfriend.

First night at the ranch, rich dude puts on a show for a businessman he’s lining up some kind of dubious deal with. They all traipse out to the stables … 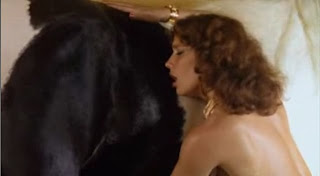 … where the above picture should give you some indication of what follows.
This blog has taken me on a journey across a wide spectrum of cinema. I’ve held retrospectives on Dirk Bogarde, Alfred Hitchcock, Andrei Tarkovsky, Sam Peckinpah and Jean-Pierre Jeunet. I’ve written about westerns, thrillers, comedies, romances, science fiction, anime, big-budget spectaculars and low-budget indies. I’ve drawn no lines between gialli and seven-hour black-and-white Hungarian arthouse movies. I’ve luxuriated in the good, the entertainingly bad and on some occasions the undeniably ugly. I’ve worked towards an objective evaluation of ‘Cannibal Holocaust’ even though it called for the expenditure of more words than I’ve invested in even the crème de la crème of my Personal Faves list. And more, much more than this, I did it my way out of my lifelong passion for film.
Last night I started watching a film where a naked woman masturbates a horse.
I enjoy trash movies as much as the next man. I have no problem with a bit of good unclean exploitation. I would make a case for the kind of movies my wife despairs of me for watching. I would defend to the death (or at least go on a protest march for) the right of any director yadda yadda yadda freedom of etc etc etc.
But a movie where a naked woman masturbates a horse??? It’s an awful, sickening scene, made worse by the soundtrack. The noises the horse makes are a clear indication of non-consensual involvement. Bottom line: it’s being sexually abused. I had a hard time with the animal deaths in ‘Cannibal Holocaust’, but at least their misery was brief. The woman-on-horse rape detailed here is, for my money, worse than any of Deodato’s dark moments.
So fuck you and rot in hell, Joe D’Amato. I’m wrapping this Black Emanuelle thing up tomorrow with a general overview of the other movies, then Winter of Discontent will continue with the kind of sick, twisted and depraved fare that you can actually enjoy.
Posted by Neil Fulwood at 12:28 PM

I think the new Tagline for the site should be "Agitation Of The Mind: Drawing The Line At Horse Handjobs Since 2010"

Or alternatively "Agitation Of The Mind: I Never Thought I Would Have To Write This But..."

I am sorely tempted to reconfigure the banner with that "Drawing the Line at Horse Handjobs" tagline. But I have this sneaky feeling that either Blogger would close me down or I'd get a hell of a lot of traffic from the wrong kind of readers!

Maybe "Agitation of the Mind: Not a Fully Paid-Up Member of the Joe D'Amato Appreciation Society".

I'll just reiterate -- better you than me watching these films. This sounds tremendously awful.

Also, I checked out the intro to this on YouTube and the theme song to theme to this was pretty awesome 70's AM soft rock.

If 'Emanuelle in America' has one redeeming feature, it's that the music isn't as fuck-awful as in the preceding films.

Then D'Amato throws in that bit of horseplay and any brownie points he may have earned go straight out the window ...

Am I to infer you didn't get to the fabled fake snuff footage?

God bless you for that.

I'm still traumatized just from a random screengrab of that clownery. Maybe one day there'll be films about all this nasty stuff being done to pedophile Catholic clergy, and I still wont watch.

I'm beginning to think that the video cutting out after 30 minutes was a win-win outcome both for this blog's integrity and my mental health.