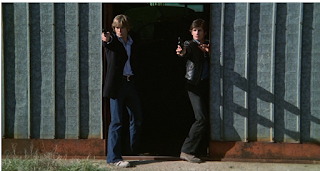 On any list of maverick cops, Inspectors Harry Callaghan and Jack Regan are bound to feature highly. Fred and Tony – the, ahem, heroes of Ruggero Deodato’s ‘Live Like a Cop, Die Like a Man’ – are the kind of guys who make Callaghan and Regan look like Jessica Fletcher and Jane Marple respectively … or they would be if they weren’t played by Marc Porel and Ray Lovelock.

On paper, Fred and Tony are little more than licensed vigilantes, whose “means justify the end” work ethic reveals them as no better – perhaps even worse – than the crooks they pursue. On screen, however, Porel man-pouts with such moody determination that I rather suspect Robert Pattison used the film as a training video in order to perfect his characterisation for ‘Twilight’, while Lovelock struts and poses as if he were in some weird commercial for men’s fashions where a pistol is 1976’s must-have accessory and the best way to show off the cut of a sweater is to have the wearer beat up a suspect. 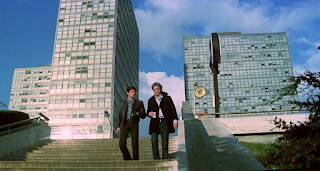 Still, for the purposes of this review let’s suspend disbelief (actually, let’s just expel the fucking thing – it’s quicker) and allow that Fred and Tony are hard, edgy characters with no moral code and not an ounce of human pity between them. As the film opens, they’ve just been transferred to a special squad under the command of Adolfo Celi. I can’t remember his character being given a name and IMDb bills Celi as “the Captain”. Anyway, Fred and Tony have been transferred to a special squad – it’s literally called the Special Squad – with the remit of stopping crimes before they’ve even been committed.

You see, the Special Squad have been given unlimited resources in the form of a very expensive computer that can predict crime (I kid you not: that’s the full extent of the exposition and Celi manages to deliver it without laughing). Now, exactly how nicking someone for a bank robbery before they’ve robbed it works in judicial terms, I’m not qualified to say. But surely it’s just intent at that point and the wannabe robbers would be back out on the streets within a few months.

Maybe that’s why Fred and Tony simply shoot everyone at the scene and leave the local beat cops to clean up with some vague promise of making sure their report clarifies everything. Not that there was even a single scene of them doing paperwork. There are plenty of scenes, however, of Fred and Tony behaving like due process never existed, and despite Porel and Lovelock’s inability to convince as hard-ass bad boys, it’s this tireless parade of unethical behaviour that ensures the film cracks along nicely, requiring no padding to reach its 100 minute running time. But desist with the technical details, I hear you cry; bugger the running time and don’t even think about boring us with aspect ratios and film stocks. Tell us about the unethical behaviour. 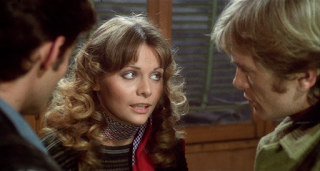 Well, it’s like this: Fred and Tony join the Special Squad and promptly go after gang boss Pasquini (Renato Salvatori), unaware that his inside man Daniele Dublino (again, I don’t recall the character having a name, and IMDb just goes with “corrupt cop”) is about to reveal their identities; and since that’s really all there is by way of narrative, Deodato and his three screenwriters (including ‘Milano Calibro 9’ helmer Fernando di Leo) basically ensure that Fred and Tony randomly get involved in any and all occurrences of mayhem on their way to the boatyard shoot-out that ends the film, be it pursuing a couple of snatch-and-grab artists in a six-minute motorcycle chase, crashing into a hostage situation, or gunning down the would-be perpetrators of an armoured truck heist for merely pulling on their balaclavas and looking at the truck.

And even when our boys are actually concentrating on the Pasquini plot, their modus operandi eschews such staples of policework as detection, forensics and evidence gathering in favour of arson, gunplay, duffing up the mobster’s associates and taking turns shagging his nympho sister Lina (Sofia Dionisio). If the surname’s familiar, that’s because she’s the younger sister of Silvia Dionisio, star of Deodato’s earlier ‘Waves of Lust’ and the director’s wife at the time. Sofia Dionisio has a nude scene in ‘Live Like a Cop, Die Like a Man’ that can only be described as sleazy. True, shooting a sleazy sex scene featuring your sister-in-law isn’t quite in the same league of ickiness as some of the stuff Dario Argento has cast his daughter in, but still …

While we’re speaking of the Dionisios, remember Silvia’s J&B scene in ‘Waves of Lust’? Well, Deodato breaks out the blended whisky for narratively redundant bit of iconography featuring Pasquini’s moll: 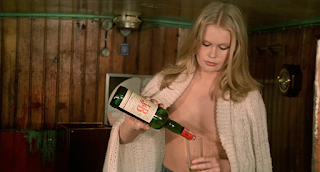 And while we’re discussing the film’s reductive treatment of its female cast, Silvia Dionisio plays Adolfo Celi’s secretary, to whom Fred and Tony behave in a manner that would make even Sid James in a ‘Carry On’ film break character and tell them off for being chauvinist pigs. Granted, the script gives Dionisio a few zingers to fire back at them, but she’s one of only three female characters who aren’t there to be a vamp or a victim (the other two are elderly housemaids incorporated for comedy value). And yes, casual misogyny isn’t exactly a hidden agenda in the film industry as a whole and 70s Italian exploitation pictures in particular, but even your most disreputable of gialli and sexploitation opuses give their actresses a bit more to do.

So what does ‘Live Like a Cop, Die Like a Man’ have to recommend it? Why splurge over 1000 words on it? Because, basically, it’s entertaining as all hell. That six-minute motorcycle chase? It kicks off literally moments after the opening credits, hurling the viewer full-tilt into Fred and Tony’s renegade way of doing things, and the pace doesn’t let up from there. There’s an action set-piece every ten minutes or so, the execution of which are generally pretty damn good – the bike chase is a stand-out; ditto a bit of cat ‘n’ mouse in a quarry, and a mob hit on one of Fred and Tony’s colleagues. Deodato’s craftsmanship is effective: he has a knack of establishing the dynamic of any given scene very economically, often using specific visual details to define location or character interrelationships. The editing is focused and rigorous, driving things forward all the time. 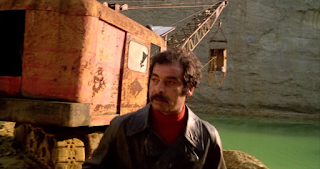 Also – and it would be remiss of me not to admit this – Porel and Lovelock make for an unforced double-act, creating a kind of bland chemistry that suggests they’ve worked together for so long that they don’t even bother playing off each other any more. It’s just a shame that they come across as moderately less dangerous than Bert and Ernie during a particularly well-behaved episode of ‘Sesame Street’.
Posted by Neil Fulwood at 9:19 AM

If you need your ex-girlfriend or ex-boyfriend to come crawling back to you on their knees (no matter why you broke up) you got to watch this video
right away...

(VIDEO) Why your ex will NEVER come back...