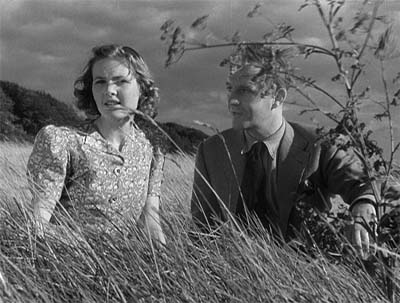 The first half of Powell and Pressburger’s output consisted, superficially at least, of propaganda pieces. Films like ‘49th Parallel’ and ‘One of Our Aircraft is Missing’ were funded by the Ministry of Information, while production of ‘The Life and Death of Colonel Blimp’ – inspired by David Low’s satirical cartoon strip – provoked enough controversy that Churchill fired off memos about it.*

‘49th Parallel’ was an invitation to American involvement; ‘One of Our Aircraft’ a tribute to the indomitable British spirit. ‘Blimp’ fell into the category of “what we are fighting for”, the eponymous Colonel’s gentlemanly, old-school style of soldiering held up as outmoded in the face of the then-contemporary conflict. ‘A Canterbury Tale’ belongs to a smaller, less remembered sub-genre of wartime propaganda: the Home Front film.

A disparate trio descend upon a small village near Canterbury: former sales assistant Alison Smith (Sheila Sim), now assigned to duties as a Land Girl; former cinema organist Peter Gibbs (Dennis Price), now a sergeant in the army, his regiment about to be posted overseas; and former coffee-drinking American Sgt Bob Johnson (John Sweet**), now stationed in England and not enamoured of the national propensity for tea drinking.

Local squire Thomas Colpeper (Eric Portman) strives to retain some sense of tradition and rural identity, giving illustrated talks to the visiting soldiers and expounding on the history and culture of the area. He believes in “pouring knowledge into people’s heads, by force if necessary”. Not that his latest potential converts (or modern day pilgrims, as Pressburger’s sometimes overly literal script paints them) don’t have other things on their mind: Alison is haunted by past holidays in the area with her fiancé, now missing in action. Johnson is cut up because his girl back home has stopped writing to him. Gibbs is looking for something more spiritual. On top of this, there’s the “Glueman”, attacking girls by night, smearing glue into their hair.

The investigation into the Glueman’s identity is the thin peg upon which the meandering narrative is hung. You’ll twig the guilty party from the get-go. The film’s real concerns are an investigation into Englishness: Powell’s camera captures the timeless beauty of the landscape. History and tradition are at the forefront (in a scene that should be twee but is actually quite wonderful, Johnson, a lumberman by trade, befriends a wheelwright twice his age, their mutual respect based on an understanding of how long wood should be aged and when it should be cut; “you can’t hurry an elm” remains my favourite line), with the occasional troop carrier crashing through the woods or Spitfire roaring overhead as a reminder of modernity.

Speaking of Spitfires, the film’s opening sequence offers its most celebrated moment – often cited as a precursor to the bone-to-spaceship jump cut in Kubrick’s ‘2001: A Space Odyssey’. Chaucer’s pilgrims set out for Canterbury, some walking, some on horseback. A falconer releases his bird. It soars into the sky, majestically. Cut: a Spitfire replaces it, engine shattering the silence, swooping down over a landscape that hasn’t changed.

Finally, with the protagonists finding their way to Canterbury – to the cathedral itself – the scene is set for a small helping of everyday miracles. It’s here that the script is at its most strained, individual resolutions feeling a little too pat. But after two unhurried hours of pastoral idyll (including an hilarious ‘Swallows and Amazons’-type scene where two rival gangs of children stage their own manoeuvres, neatly mocking those Gibbs and his regiment are engaged on), who’s complaining? ‘A Canterbury Tale’ isn’t the most memorable, most offbeat, most challenging or most indulgent film Powell and Pressburger made, but it’s still a film that only they could have created.

*See the introduction to the published screenplay (Faber & Faber) and A.L. Kennedy’s BFI chapbook on ‘Blimp’ for more information.

**Sgt John Sweet was a real-life American soldier whom Powell had seen in an amateur production. His performance makes it clear that he wasn’t a professional actor, but there’s an unpretentiousness to his screen persona that, stopping just short of “gee whiz” cornball hokum, is somehow endearing.
Posted by Neil Fulwood at 11:48 PM

First I want to thank you for participating in my blog-a-thon. Very much appreciated!

I've seen this one, and my own thoughts parallel your own very closely. It's certainly beautiful, but I found it a bit difficult to sort through. I however adored the final sequence, at least a little more than you did. It was then that I became really caught in the narrative, the miracles were fantastic... but so is so much of Powell & Pressburger's work. I was taken in by the majesty of Canterbury more than anything else though.

I love Colpepper's lecture. As he speaks, there's an entirely non-naturalistic theatrical fade up on his face, while another fade causes Sheila Sim, in the audience, to sink into darkness except for her eyes.
I also love what he SAYS, of course.

Thanks for your comments.
Yes, the grandeur and sense of history of Canterbury itself are stamped on every frame of the final sequence. Did you know that the bells were removed from Canterbury Cathedral during the war to preserve them from potential bomb damage? The tolling bells you see at the beginning and end of the film are a very convincing model.
Colpepper's lecture is the cornerstone of the film. I agree entirely that P&P's use of lighting communicates just as much as the words. Eric Portman's performance is superb: such quiet authority, such certainty in his beliefs and actions.

According to Powell, Pressburger was a bit homophobic and didn't much like actors like Anton Walbrook and Eric Portman. Powell had no such problems and got some of his best work from gay actors. Portman in the lecture scene and Walbrook at the end of THE RED SHOES more than vindicate him.

@David C - I thought Powell was homophobic and Pressburger not. This was reported in the Michael Redgrave autobiography. And Pressburger knew Walbrook from their days in the Ufa, he let AW edit his own speeches - they were friends. Or am I wrong?

You're probably right, because Powell is not a reliable witness. His autobiographies are full of charming fantasies and self-serving inventions. So it's possible he said Pressburger was homophobic when really it was himself.
Nevertheless, Powell & Pressburger's films are jam-packed with gay actors (and ballet dancers), so it wasn't a prejudice that stopped either of them working with the best talents.