What do 'The Assassination of Jesse James by the Coward Robert Ford', 'No Country for Old Men' and 'There Will Be Blood' have in common, apart from being three of the finest films I've seen in the last three months?

Firstly, they're all adaptations - 'Assassination' and 'No Country' from novels of the same title by Ron Hansen and Cormac McCarthy, 'Blood' from 'Oil!' by Upton Sinclair. In a current cinematic climate of shoddy remakes and sequels shot through with the law of diminishing returns, they represent high-quality film-making drawn from bona fide literary sources. 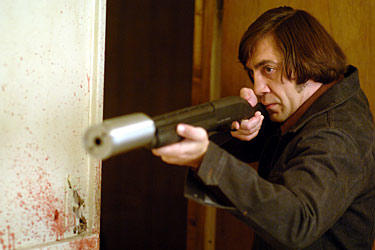 'No Country for Old Men' functions on a different level. There's an enigmatic quality to it. It sounds poetical. It is. The phrase comes from W.B. Yeats' poem 'Sailing to Byzantium'. Again, it carries weight and significance when spoken aloud.

So, too, 'There Will Be Blood'. Four granite-like monosyllables. There's no modulation to them, no rhythm. Each word falls from the tongue as bluntly and solidly as the one that proceeds it. 'There Will Be Blood'. It's a statement. There's no way around it. Likewise, the film will have no last-reel reprieve. There's only one way the story's going: straight into the heart of darkness.

They're all epic: 'Assassination' and 'Blood' in their two-hour-forty-minute running times, the scope and sweep of their stories; 'No Country' in its striking vistas and elegiac tone. All boast the kind of cinematography that remind me why I fell in love with cinema as an art form in the first place. Cinema is, first and foremost, a visual medium; one wherein movement is crucial. That's where the word "movie" comes from after all: moving picture. All three films have magnificent - but not prettified - cinematography. It comes as no surprise that genius lensman Roger Deakins shot two of them, with Robert Elswit more than worthy of comparison to Deakins for his work on 'There Will Be Blood'. 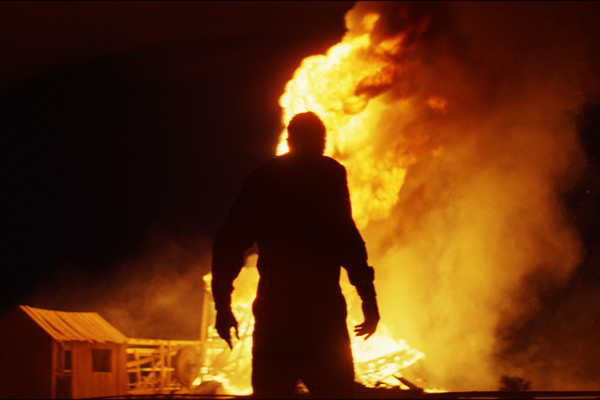 It's tempting to describe all three as the work of directors at the top of their game - for the Coens, 'No Country' is their best in a decade and the equal of the half dozen or so works in their filmography that can genuinely be called classics; for Paul Thomas Anderson, 'Blood' is a quantum leap from the confident and technically brilliant but ultimately somewhat soulless stylisations of his previous features - but how can I apply this description to Andrew Dominik? 'Assassination' is only his second film (after 'Chopper', which I must confess I've never seen). Is he at the top of his game so soon into his career? Or will he scale even greater heights, make even more impressive films? Oh God, I hope so!

They are all films about greed. 'No Country' and 'Blood' in particular take scenarios that are almost cliches - respectively: otherwise honest man finds bag full of drug money and goes on the run; prospector is driven to dangerous measures in his pursuit of oil - while 'Assassination' touches on greed in the fiscal sense in that Jesse James (Brad Pitt) has created his own myth carving out a career as a ruthless and violent thief, but also examines psychological greed - that of Robert Ford (Casey Affleck), half in love with and half pathologically jealous of James, wanting to be him but always falling short, a laughing stock among his peers.

'The Assassination of Jesse James by the Coward Robert Ford' has two main characters, but no protagonist - no-one you could remotely consider a hero. James is vicious, paranoid, as quick to kill those who ride with him as those who oppose him. Ford is a spiteful child awkwardly inhabiting a man's body. Two antagonists tear the screen apart in 'There Will Be Blood': oilman Daniel Plainview (Daniel Day-Lewis) and fire-and-brimstone preacher Eli Sunday (Paul Dano).

'No Country for Old Men' divides its screen time between three main characters: Llewellyn Moss (Josh Brolin), who stumbles on a drug deal gone wrong and takes the money instead of turning round and getting the hell out of there; Anton Chigurh (Javier Bardem), a methodically efficient killing machine dispatched by various underworld types to retrieve said currency; and Sheriff Ed Bell (Tommy Lee Jones), a small-town lawman steeped in the past, unable to come to terms with changing times (Jones is perfectly cast here, having already explored these kind of Peckinpah-esque themes in his excellent directorial debut 'The Three Burials of Melquiades Estrada').

All three films have their share of violence: Chigurh's chillingly dispassionate executions; James' casual brutality and almost knowing acceptance of Ford's act of cowardly treachery; Plainview's increasingly vehement battle of wills with Sunday, including a jaw-dropping scene where Plainview whores his atheism and allows, in return for permission to build a pipeline across a parishoner's land, Sunday to baptise him into his self-styled Church of the Third Revelation, physically beating the "demons" out of Plainview while forcing the prospector to decry that he's a sinner who has abandoned his child. The reversal of this scene, at the end, veers from nervous hilarity to catharsis to shocking finality.

They all have endings that will challenge the complacent film-goer, reared on traditional three-act structure and neatly tied-up endings. 'The Assassination of Jesse James by the Coward Robert Ford' has its conventional climax - Ford's murder of James - two hours in, then goes on to explore Ford's brief fame and lasting infamy, the shadow it throws across his life, the inevitable circularity of his own death. 'There Will Be Blood' climaxes after fifteen wordless minutes as Plainview's initial efforts to find oil are gloriously rewarded. What follows is a study in commerce vs. religion (although, for Plainview, oil clearly is his religion; the triumphant way he mouthes the word "pipeline" after what should have been the humiliation of his baptism says it all); a weighing up of the price of oil.

It can be argued that the climax of 'No Country for Old Men' happens before the film opens: the double-cross and ensuing shoot-out that leaves men dead and pick-up trucks riddled with bullets in the middle of nowhere. What follows, follows as a result. Fortune - good or ill - plays a greater part here than narrative. Film and book are titled from a poem; a phrase by another poet, William Ernest Henley, applies: "the vagaries of chance".

These films are studies in aftermath. They are straight up masterpieces.

An interesting three-way review. I particularly like your discussion of the titles. I think the trend of second wave revisionist westerns is definitely leading to new places.

It doesn't quite fit with the rest and may not be as artistically appealing, but I was fond of "3:10 to Yuma" too. Check it out if you haven't already.

Anonymous said...
This comment has been removed by a blog administrator.
8:35 PM

Loved reading this, sums up everything I have been feeling on all three of these movies lately.