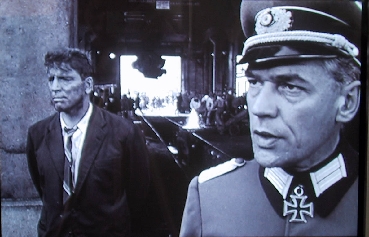 When I decided on the 100 personal favourites project, the selection parameters were going to be random: I'd put the titles of the 100 films in a bag and draw out one a week. If the resulting title was one I had in the DVD or VHS collection, I'd revisit it. If not, then what the hell? The whole point was to rave about why they're favourites, why they mean so much to me, why they've stuck in my mind. So even if it was a film I haven't seen for a while (ie. 'Django') or which isn't currently available to rent or buy on DVD (to the best of my knowledge, 'Hollywood Shuffle'), I'd simply rely on my memories of it. This is the Agitation of the Mind, after all, not the Accuracy of the Memory.

So: I was good to go. The hundred titles had been typed out, folded up and bunged in the bag. My better half had plucked out the first ('Donnie Darko').
However ...
At work yesterday, idly surfing the net while I should have been ... I don't know ... doing something else, I learned that actor Paul Scofield had died on Wednesday, at the age of 86. The star - definitely more so that first-billed Burt Lancaster - of John Frankenheimer's 'The Train', there was only choice for my small-screen viewing last night. A glass of wine was raised - and this post is dedicated - to the memory of Paul Scofield.
'The Train' starts with an art-loving Nazi, Colonel von Waldheim (Scofield), ransacking a French museum as Allied forces draw closer to Paris. Determining to have their collection of masterpieces - works by Cezanne, Renoir, Matisse, Picasso, etc - for himself, he defies counter-orders from a higher ranking officer and commandeers a train bound for Berlin. He puts a trusted adjunct aboard the train and gloats as its priceless cargo steams out of France.
Only the Resistance have cottoned onto his plans and hard-bitten operative Labiche (Lancaster) is charged with stopping the train at all costs. Initially, he refuses. His cell of freedom fighters has dwindled from eighteen men to just four and he argues that he can't reconcile risking their lives with the retrieval of some paintings.
Labiche works at a local railway yard, responsible for the day-to-day co-ordination of incoming and outgoing freight trains. Consequently, he witnesses an heroic but foolhardy attempt by fellow Resistance member Papa Boule (Michel Simon) to get Waldheim's train clear of the marshalling yard during an Allied bombing run, then sabotage it afterwards to prevent it reaching Germany.
Papa Boule's actions result in his execution (the first of many lives lost to Waldheim's reprisals). Labiche's attempts to intervene see him selected by Waldheim to drive the train to its destination. What follows is a battle of wits between the two men, a game of forward thinking and low cunning, not unlike a chess match but with the French railway system as the board and a steam loco and a couple of dozen waggons for pieces. (Frankenheimer's attention to detail is astounding; his talent for incorporating technical minutiae into the narrative - indeed, using it as the cornerstone of scenes of suspense - is pure genius.)
Labiche and his collaborators find their ingenuity taxed: first they re-route the train, disguising station signs to fool Waldheim's adjunct that the train is moving ever closer to Germany when it fact it's thundering deeper into the heart of France; later, less subtle methods are employed and Labiche goes all out for de-railment.
And this is what I find fascinating about 'The Train': the more desparate Labiche's methods become, the greater the human cost. All for a collection of paintings, the value of which he doesn't understand and which he was unwilling to risk lives for in the first place. On the other hand, Waldheim - while there's no doubt he's a ruthless bastard - does what he does purely because the pictures mean so much to him. They go beyond the war, beyond sides, beyond politics. They are his passion, his motivation.
But what motivates Labiche? Ah, herein lies the delicious dichotomy of 'The Train'. This is what Waldheim has to say (and this is the principle reason I love this film): "A painting means as much to you as a string of pearls to an ape ... You are nothing, Labiche; a lump of flesh. The paintings are mine. They always will be. Beauty belongs to the man who can appreciate it. These paintings will always belong to me or a man like me. Now, this minute, you couldn't tell me why you did what you did."
Beauty belongs to the man who can appreciate it ... How can you not love a line like that?
You can probably guess at Labiche's (wordless) response. It makes for a shatteringly nihilistic ending, all the more so when you realise that the ostensible villain is passionate, articulate and an aesthete, and the ostensible hero little more than a bull-headed thug.