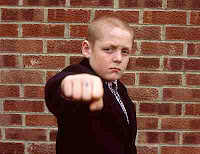 Although it doesn't feature on the soundtrack, I couldn't help but hear 'This is England' by The Clash in my head as I sat down to watch Shane Meadows' film; in particular the snarlingly accusatory line "this is England / what we're supposed to die for".
Eight year old Shaun (Thomas Turgoose)'s father does just that: dies for his country in the Falklands War. The opening credits montage establishes the early 80s setting: clips from popular TV shows interspersed with newsreel footage of the social unrest that swept Britain during the Thatcher administration (I was still a couple of years shy of my teens back then but I remember the riots, the heavy-handness of authority).

Margaret Thatcher's presence is kept to a few shots in this sequence and the graffiti'd statement 'MAGGIE IS A TWAT' later in the film, but the legacy of her government hangs over the film like a dark spectre. This is the England I remember from my childhood: a country that was angry and spoiling for a fight, a country where racial epithets were common conversational currency.

Twenty odd years after the film was set (and having swallowed a hefty dose of political correctness in the 90s), the dialogue in 'This is England' is like a smack in the face (Channel 4, who screened it a few nights ago, broadcast a warning about the subject matter and language not just at the start, but during every commercial break). But again, it's just how I remember it. I recall friends of my father joking about "paki bashing"; the N-word was bandied about unashamedly. The National Front had an almost public face back then.

‘This is England’: agitates the mind and the memory.

Shaun, angry at his father's death and having difficulty communicating with his well-meaning but ineffectual mother, is bullied at school and subjected to tauts about his bereavement. Frustrated, painfully young and all too impressionable, Shaun's life takes a turn when he's befriended by a group of older lads, led by the locquacious Woody (Joe Gilgun). Soon he's having a whale of a time plinking away with a BB gun, getting a skinhead 'do, breaking into empty houses and committing random acts of vandalism.

Meadows shows both sides: the insubstantiality of this kind of lifestyle; and the sense of cameradie that comes of being part of a group or a gang; being accepted. Then things take a darker turn.

Woody's mate Combo (Stephen Graham) gets out of prison, having done a three stretch and kept shtum about things that would have implicated Woody, and renews old acquaintances. Combo's yer full-on skinhead, immediately showing up Woody and his gang as a bunch of kids in it for the image. Combo's dangerous, unpredictable and NF to the core. He's also eloquent and charismatic. He becomes a father figure to Shaun.

Combo enters the film at just under the halfway mark and things are never the same again - for Shaun or the audience. Stephen Graham's performance is like watching a snake: you're not all that keen on what you're looking it, but it's somehow mesmerising. His agitprop speech, a queasy bit of white supremastist rhetoric which repels even beholden-to-him Woody, is the dark centrepiece of 'This is England'. Meadows engages with his dangerous and controversial theme, his directorial approach that of a witness, not a moralist. He is intelligent enough not to preach to his audience.

'This is England' tells some unpalatable truths about cultural identity in Britain's not-so-distant past, and as such is not an easy film to watch. But nor is it without humour; and it's definitely not without a sense of tenderness towards its young, misinformed protagonist. After an up-and-down career following his superb debut 'TwentyFourSeven', this puts Meadows at the top of his game.
Posted by Neil Fulwood at 6:29 PM