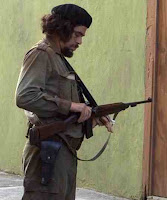 Q. When is a biopic not a biopic?

A. When it’s Steven Soderbergh’s ‘Che – Part One’.

But before I get into the whole biopic discussion, some thoughts on the title. Early word, when Soderbergh premiered the film(s) at Cannes, was that he’d made two stand-alone but thematically connected films (shot in different aspect ratios) entitled ‘The Argentine’ and ‘Guerilla’. Then I heard that a limited American release offered film-goers the opportunity to experience the whole thing in a single four-and-a-half-hour sitting – a “roadshow” edition called ‘Che: A Revolutionary Life’. Now it shows up in the UK as ‘Che – Part One’ and, opening next month, ‘Che – Part Two’ – which, according to some of the American film sites I follow, are the titles of the two halves of the “roadshow” version.

So why, particularly when they’re being released a month apart, aren’t the UK showings going under the titles ‘The Argentine’ and ‘Guerilla’? With different aspect ratios, and occupying different timelines and geographies (the Cuban revolution of 1958-59 in the former; the failed Bolivian revolution of 1967 in the latter), it’s clearly only a film of two halves if seen in the “roadshow” format, nor does it seem quite as simple as saying one film is the sequel to the other.

But enough! Two paragraphs and 200 words on the title alone!?!

To business: ‘Che – Part One’ is not a biopic because it tells us absolutely sod bugger all about Che Guevara the man, apart from the fact that he trained as a doctor before becoming a revolutionary (which I already knew from ‘The Motorcycle Diaries’) and he suffered from asthma. Nothing else. His background – nada. His motivations – zilch. His personal life – a single line of dialogue mentions a wife and child in Mexico; nothing beyond that.

It would be easy to say, by this definition, that the film fails. But that’s not the case. Putting aside a disjointed first 15 minutes and some intrusive voiceover (specifically during the action scenes; voiceover should not be used during action scenes), it’s an emphatic success. And it’s a success as a biopic. It’s just not a biopic of Che Guevara (a performance of gravitas and control by Benicio del Toro).

‘Che – Part One’ is a biopic of a revolution. Soderbergh’s direction, as controlled and unflashy as his leading man’s performance, concentrates on minutiae; you could almost say this is a film about logistics. Recruiting men? Make sure they bring their own rifles. Half your fighting force illiterate? Establish a school within the camp. Anyone wounded? Establish a field hospital as well. Any renegades amongst your men, taking advantage of those same oppressed peasants you’re fighting for? Use discipline – execution if necessary.

Soderbergh and his cast (good naturalistic acting here) build up a wealth of detail, keeping you entrenched in the hills and forests with Guevara’s men for much of the running time, finally taking the revolution to the streets in a superbly orchestrated and sustained set-piece at the end.

Posted to coincide with Steven Soderbergh’s 46th birthday. Many happy returns, sir.
Posted by Neil Fulwood at 11:55 AM