Jeremy has devoted February at Moon in the Gutter to twenty-eight films missing in action on DVD. He has already unearthed a cornucopia of curios and classics, all of them criminally overlooked.

I’d like to weigh in with four titles – one because it’s been at least fifteen years since I’ve seen it – and the others because I’ve never seen them and would welcome the opportunity. They represent four consecutive appearances in Dirk Bogarde’s filmography, the last proving of such great personal frustration to him following the director’s re-editing of the Bogarde-approved original cut (“he fucked up my performance and he fucked up the film”, as the great man unequivocally put it during a TV interview in the ’90s) that he withdrew from film-making for over a decade and would only return to the big screen once more, in 1991 for Bertrand Tavernier’s ‘These Foolish Things’.

If for no other reason than selfishness – it would greatly aid me in putting together the Third Annual Dirk-Fest later this year – here’s a big plea to whichever distribution companies have the rights to them for the following titles on DVD:


The Serpent (1974) – I’d love to see this purely because of its eclectic cast: Bogarde, Yul Brynner, Henry Fonda, Philippe Noiret and Virni Lisi. Apparently it’s something of a Euro-pudding, with locations (and languages) flitting between the UK, Germany and France. Bogarde, in a letter to Penelope Mortimer, describes the part as necessitating “very little except stand[ing] about in a black raincoat looking enigmatic”. Ah, but no-one did enigmatic like Dirk Bogarde … and surely the film’s worth it for that alone.

Permission to Kill (1975) – more spy shenanigans. Bogarde described this one, in another letter to regular correspondent Penelope Mortimer, as “a nice simple CIA-chase-round-the-airport” sort of movie, adding that his fee would foot the bill for a new terrace at Clermont, his home in France. Again, the film allays Bogarde with some interesting co-stars: Ava Gardner, Frederic Forrest and Timothy Dalton.

Providence (1978) – Alain Resnais’s darkly comic tale of a dying novelist and his dysfunctional family is a brilliant, multi-faceted meditation of life, death, art, memory and the blurred lines between fiction and reality. Bogarde co-stars with John Gielgud, Ellen Burstyn and David Warner. This is high-profile stuff and with the long-unavailable Tartan VHS release changing hands for upwards of £20 a copy, it’s long past due for the DVD treatment. 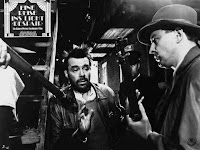 Despair (1978) – if ‘The League of Extraordinary Gentlemen’, the movie that well fucked Sean Connery off with film-making, can be readily acquired on small shiny disc, then why can’t we get a chance to make our own minds up about the production that was almost Sir Dirk’s final hour. With box-sets of director Rainer Werner Fassbinder’s earlier work on the market, surely ‘Despair’ – from a script by acclaimed playwright Tom Stoppard (loosely adapting a novel by Nabakov) and Bogarde in the lead role – has an audience of genuine movie-lovers eagerly awaiting its release?

Great stuff,
I haven't seen any of these and would especially like to see Despair. Thanks for linking back to Moon and most of all for participating!

Thanks, Jeremy. 'Providence' is the only one I've seen, about 15 years ago. It was TV one night and like a fool I didn't tape it! Like an even bigger fool, I didn't buy the Tartan VHS while it was still available because I'd just made the transition to DVD then and decided to wait till it came out in that format.

In the words of that great 20th century philosopher Homer Simpson, "D'oh!"