By rights, 'Darling' ought to be a full-throttle, rip-snorting (or coke-snorting) lurid delight, a guilty pleasure of the highest order. In the hands of Russ Meyer it could have been a trashy soft-core romp a la 'Beyond the Valley of the Dolls'. With Richard Lester at the helm, it might have been the bona fide document from the Swinging Sixties that actual director John Schlesinger so obviously wanted it to be.

'Darling' starts with Diana Scott (Julie Christie) recounting her life story to an interviewer. There she is as a little girl on a school outing. There she is as a little girl in the school play. There she is aged twenty and all grown up with it, sashaying through the great metropolis when up comes a production assistant on a current affairs show presented by Robert Gold (Dirk Bogarde). She contributes a few casual lines to an interview on social attitudes and the generation gap and next thing you know Diana and Robert are merrily swanning around together. 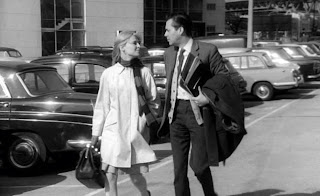 Trouble is, he's married. So's she. Oooooh, controversial. Robert comes off as the heel for leaving his wife and children (a shot of him, suitcase in each hand, trudging sheepishly away from the house pulls back through the living room window to reveal he's left an envelope on the mantlepiece addressed to the luckless Mrs Gold), while Diana does an effective character assassination on her ex in just a couple of lines of voiceover (he's a "nice boy" apparently, and "playing at" being married). I may have missed it, but I don't think the poor chap even gets the dubious courtesy of an envelope on the mantlepiece.

Diana and Robert set up home together, but Robert does inconsiderate things like typing up the scripts for his TV show and treating Diana sensitively, so she does what any self-respecting vacuous amoral chic chick would do: she hooks up with filthy rich advertising executive Miles Brand (Laurence Harvey)* who has no class but looks good when he takes his shirt off and has a flash apartment and a Mercedes sports car. Because these are the things that count.

Sorry, was I being facetious?

Outwardly 'Darling' is a serious, multi-layered film that deconstructs the archetypes of the Sixties as determinedly as the aforementioned Richard Lester celebrated them. Not the least of its achievements is suggesting that Diana's outwardly respectable and starchly middle class parents are the people who schooled her in the elegantly empty small talk and studied self-confidence that greases the wheels as she makes her way up in so-called society.

Schlesinger's satire finds its outlet in the panoply of supporting characters: the sleazy MP (a pre-'Porridge' Brian Wilde) who drools over Diana, the dissipated photographer who captures an image that wins her the first of many lucrative modelling and advertising contracts, the fast-buck producers who cast her in a B-movie potboiler, and Miles's bohemian friends in Paris who think nothing of making out in front of each other and playing truth or dare. Ooooooh, even more controversial. (This, incidentally, is the most awful moment in the film: Schlesinger trying to be all arty and European and stylishly debauched but concocting, instead, a scene so flatly unerotic and unintentionally hilarious it makes your average Robin Askwith tits 'n' milkmen flick look like 'Citizen Kane'.) 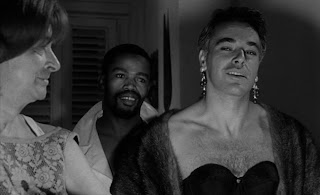 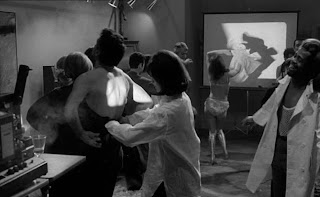 Schlesinger draws parallels between these various stratas of society. When Diana meets the MP it's at a fundraiser whose rich patrons are doing their bit for the poor (particularly the minorities). Schlesinger cuts from a fat white woman stuffing herself to three black youths done up in period garb as serving boys watching her resentfully. Later, when Diana meets the Paris set, their liberal credentials are established by the inclusion of a sexually active black man as one of their own.
The fashions, the cars and the yappy John Dankworth score root 'Darling' firmly in the Sixties (albeit a view of the Sixties filtered through the consciousness of a director critical of the rapidly changing social mores). So, embarrassingly, do the unreconstructed values. For all that the fundraiser scene makes a point about prejudice, hypocrisy and condescension, the overall treatment of foreign characters (British Africans and Italians come off the worst) is as dubious as the treatment of gays (stereotypical) and the treatment of women. Schlesinger and scripter Frederic Raphael's portrayal of Diana is borderline misogynistic. With a less appealing, less charismatic and less meltingly beautiful actress than Julie Christie - and without Dirk Bogarde lending real acting chops to the first third of the film - 'Darling' would have been scuppered.
Fortunately, though, Christie is iconic. She turns an underwritten cypher into a sometimes confused, sometimes provocative and ultimately tragic heroine. The final scenes, where the loneliness and the desperation close in, are compelling. It's her film in the final analysis, but Bogarde's in the first third. As the cerebral, sardonic, slightly rumpled Robert - a man who ruefully walks out on his family only to find his new life isn't what he wanted - Bogarde brings depth and gravitas to the proceedings. His is a slow-burn performance - he mostly underplays, giving Christie the limelight - culminating in his discovery of Diana's affair with Miles and their verbal showdown as they leave a private viewing at a swanky art gallery. Diana makes to hail a cab, but Robert stops her.
Robert: We're not taking a taxi.
Diana: Why not?
Robert: I don't take whores in taxis.
Diana: What do you mean?
Robert: That's what you are, isn't it? A little whore. Isn't it? You've been back from Paris two days already. If you don't want me to find out what you're doing, don't leave your ticket and passport lying about all over the place.
Diana: Robert, I knew you'd get the wrong end of the stick ...
Robert: Your idea of fidelity is not having more than one man in the bed at the same time. You're a whore, baby, just a whore. And I don't take whores in taxis. 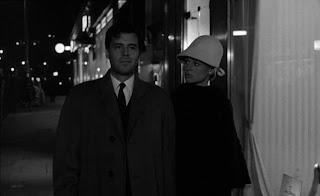 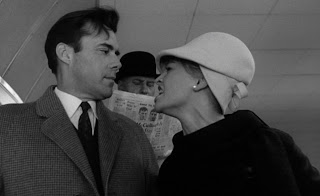 By nature of its attack on superficiality, 'Darling' inhabits a shallow milieu. Correspondingly, as the film progresses and Diana moves towards what is simultaneously her apotheosis in social climbing and the final stage of her objectification by the male gaze, characters become little more than set-dressing; emotions drain to hollowness and a facade of bored civility prevails. In depicting the stagnant, 'Darling' stagnates. The break-up between Diana and Robert is the high point of the film, their argument played out as, still in evening dress, they take the escalators down into an Underground station, the other punters nondescript, shabby and vaguely embarrassed by these two elegant individuals letting rip at each other, Diana's accent slipping as she yawps at him like a fishwife. It's the first, and only, time that the social masks drop and something raw, passionate and all-too-human is revealed.

*He makes his money by selling products and his name's Brand. I'll bet they were up all night thinking of that one! (By the same token Gold is belatedly identified as the only man who was worth anything to Diana, so he's called Gold. Diana is an attention seeking blonde whose sole talent is saturating the media with her own image, and who ends up a princess by dint of a loveless marriage, so she's called --- ... oops, better not go there.)
Posted by Neil Fulwood at 9:11 PM