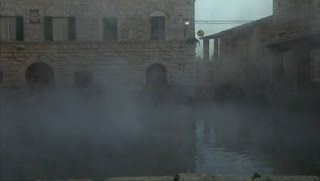 Italy. The present. Russian poet Andrei Gorchakov (Oleg Yankovskiy) is travelling with his translator Eugenia (Domiziana Giordano) while he researches a book on the life of a famous composer. Their relationship is tense and Gorchakov is haunted by thoughts of his wife and memories of his childhood back in Russia.

At a spa town, Gorchakov meets Domenico (Erland Josephson), a mystic who has experienced visions and is infamous for having locked his family away in preparation for the end of the world. A kinship is evident between Gorchakov and Domenico, and the mystic tasks Gorchakov to complete a symbolic act.

Readying to leave Italy – the act (to cross the drained spa with a candle which must be kept alight) not completed – Gorchakov is contacted by Eugenia who alerts him that Domenico, in an almost euphoric state, is preaching to crowds in Rome. When Domenico concludes an intense sermon on brotherhood and the necessity to strive for something better with an act of self-immolation, Gorchakov returns to the spa town to keep his promise. 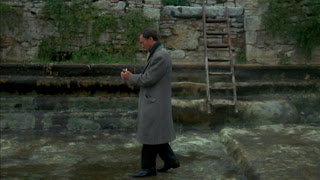 ‘Nostalgia’ is the one Tarkovsky film I’ve almost dreaded writing about. How does one discuss Domenico’s fiery departure from the film without making it sound unbearably melodramatic? How to describe the mise-en-scene and elliptic accretion of imagery which finds majestic synthesis in the very last shot without haring off into the realms of purple prose and pretentious parlance? How to communicate the sustained emotional power of an eight and a half minute take in which a man makes several slow shuffling attempts to cross an empty pool without a candle going out?
What makes ‘Nostalgia’ even harder to write about – as a fully paid-up atheist – is how deeply, profoundly religious it is. Even more so, arguably, than ‘The Sacrifice’ with its bargain-with-God premise. Gorchakov’s appointment with the pool and the candle goes beyond metaphor, beyond symbolism. By the end of those painful, interminable eight and a half minutes, the pool and the candle have become his own personal stations of the cross. 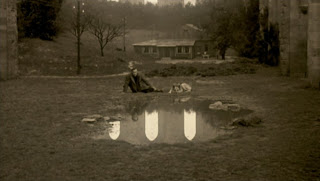 Then Tarkovsky throws in that indescribable, awe-inspiring final shot, the camera pulling slowly back from a fairly ordinary image, one already located in Gorchakov’s memories and referenced earlier in the film; the camera pulls back and a reflection in a pond (as in all of Tarkovsky’s work, water provides a wellspring of images*) suggests that there is a bigger picture, a larger element, something beyond the merely nostalgic or pastoral; slowly, gradually the camera pulls back until the whole astonishing image is revealed.
And even then the full import isn’t immediate. The visual bravura initially overwhelms; invokes comparison with the metaphysical imagery which closes ‘Solaris’. The combined emotional, intellectual and – damn it – spiritual meaning of the image gradually radiates from Tarkovsky’s mind, via the screen, and into the viewer’s.
Yes, I know, that comes across as hyperbolic and downright sloppy writing. But I can honestly find no other way of describing the cumulative power of ‘Nostalgia’. It is the cinematic equivalent of a religious experience.

My Tarkovsky watching ended with Solaris and Stalker...but of course I am now gonna watch Nostalgia as soon as possible.

I am constantly intrigued by films dealing with religious subject matter, specially those that try to expose the religious experience as something barbaric and unnecesary. I love films like the original Wicker Man for that reason.

But Tarkovskys films go deeper, I was not aware that all his films tapt these themes somehow. It seems he was on a crusade against religion.

There are a couple of directors that are like this, for example, Christophe Gans with his Brotherhood of the Wolves and Silent Hill, both highly anti religious films.

I love it when directors explore the mystical side of life, because any human being with a bit of a brain will eventually end up asking these questions about life, and where it all came from, and where were all going...

Thanks for that review, Ill be checking out this film as soon as possible!

'Nostalgia' - along with 'The Sacrifice' - is probably Tarkovsky's most nakedly religious film, particularly the end sequence with the candle. Very metaphorical.

'The Sacrifice' - which I'm just writing a rather glib review of (it's a very pretentious film and started annoying me about halfway through) - is about a man having to keep a bargain with God, but (unusually) Tarkovsky is very heavy-handed in the way he deals with the material.

From what I've read about Tarkovksy, he had strong religious beliefs. I think the one film of his that's categorically firm in its religious content is 'Andrei Rublev' about the life of a painter of religious icons. All of his other work seems strangely ambivalent about religion, or at least use metaphors to talk about the subject.

I'd be interested in your opinion on 'Nostalgia', particularly the final shot which is very symbolic. I don't want to say too much about it and give you any preconceptions. If you do get a chance to see it, it would be interesting to read your review and compare notes.

(I agree with you on Gans's 'Silent Hill', by the way - very unsubtle in the way it uses religious imagery in a negative way.)

I will be watching it and reviewing it soon Neil! Ill keep you posted as soon as I do.

What I like about Tarkovsky is that even though he might have had strong religious beliefs, he had no problems with questioning the validity of these beliefs.

one of the rare of its kind in the world of cinema,tarkovsky developed some of those cinematic style which are truly cinematic as he showed the way different from traditional and formalistic style of film making.he can be cosidered the best film maker after ingmer bergman..