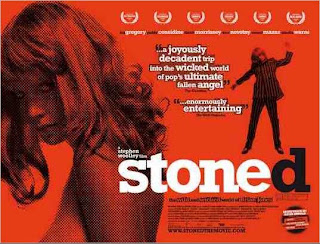 It received decent notices during its (brief) theatrical run.

The soundtrack was guaranteed to be a belter.

To a degree, it delivers in all three areas.

Let’s take them one at a time:

There’s plenty of drug use. Fuck’s sake, it’s a biopic of Brian Jones! And if this film and Stephen Davis’s Rolling Stones biog ‘Old Gods Almost Dead’ are anything to go by, the guy had a tendency to the kind of indulgences that make Keith Richards’s hoover-nosed habits look like a life of sobriety by comparison. Yet it never reaches the trippy heights or psychedelic mind-fuckery of Oliver Stone’s ‘The Doors’, Ken Russell’s ‘Tommy’ or Nic Roeg and Donald Cammell’s counter-culture anti-masterpiece ‘Performance’.

Rock ‘n’ roll? Hell, yeah. The Rolling Stones are represented by The Counterfeit Stones (doing a sterling job) and the soundtrack is rounded out with original cuts by Jefferson Airplane, Traffic, The Small Faces and The Bees.

The narrative focuses on the final days of Brian Jones (Leo Gregory), estranged from the Stones and whiling away his time at Cotchford Farm, his sprawling country retreat and formerly the home of children’s author A.A. Milne, as he waits for the inevitable expulsion from the band. (Jones was unable to participate in the Stones’ 1969 tour of America due to his drug convictions; moreover, his attendance at rehearsal/recording sessions had become more often than not characterised by incapacitation and inability to play.) He is attended by his latest girlfriend Anna Wohlin (Novotny) and loyal Stones chauffeur-cum-minder-cum-fixer Tom Keylock (David Morrissey). At Jones’s behest, Keylock engages local builder Frank Thorogood (Paddy Considine) to do some renovation work around Cotchford Farm. 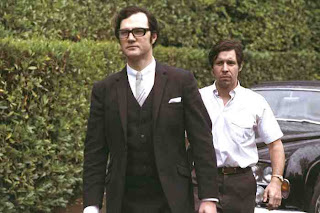 A culture clash ensues between the bullish, defiantly working-class Thorogood and the bohemian, flamboyant and sexually ambiguous Jones, the escalating tension steeped in sexual rivalry as Jones plays off the seductive Wohlin against Thorogood. Jones rubbishes the work of Thorogood and his team, calling for entire walls to be torn down before changing his mind and tasking the workmen with re-erecting them. Pay is promised then withheld, Thorogood taking his grievances to Keylock while Jones blithely shrugs off anything so piffling as monetary concerns.

And yet, somehow, a strange and increasingly unhealthy mutual dependency develops between Jones and Thorogood, events playing out at Cotchford Farm (as Jones heads inexorably towards a date with the swimming pool) in counterpoint to Jones’s recollections of the band’s history, his destructive and abusive relationship with Anita Pallenberg (Mazur) and her eventual cuckolding him with Keith Richards (Ben Wishaw).

There’s dramatic potential aplenty in all of this, but the film has two main problems (and a host of minor ones, but for the sake of brevity I’ll just stick to the biggies). The first is the absolute lack of a sympathetic, likeable or even remotely pleasant character. Don’t get me wrong, I’m not some bludgeoning literal philistine who requires everything to be black and white and the good guys and the bad guys to wear hats of the requisite colour. I like to see a bristlingly nasty villain, a morally compromised anti-hero or a vituperatively cynical bastard in the lead role as much as the next man. But I also get the most out of a film or novel if I can identify, root for or moderately give a shit about at least one of the characters. ‘Stoned’ gives us Jones, a woman-beater and possibly a rapist; Thorogood, a human incendiary device with a hair-trigger; Keylock, a leech who exploits his access to the Stones’ inner sanctum in order to shag groupies; Wohlin, an alternately clingy and indifferent bit of set decoration; and Pallenberg, whom the filmmakers portray as complicit in Jones mistreatment of her. Indeed, the depiction of Wohlin and Pallenberg adds a tinge of misogyny to an already seedy and black-hearted aesthetic.

The second is Stephen Wolley’s directorial approach. In the flashback sequences, he achieves an off-kilter aesthetic that evokes (sometimes through explicit plagiarism) ‘The Servant’ and ‘Performance’, both of which deal with unhealthy co-dependent relationships, power games and troilism. However, in the Cotchford Farm scenes, ie. those which define the film’s dynamic and as such could (should?) be expected to engage with the aforementioned psychosexual tropes, he seems ill at ease: the visuals are bland, the pacing uneven, the sexual tension wanting in comparison to the scenes between Jones and Pallenberg. The result is an inconsistency the film is unable to reconcile.

‘Stoned’ is never less than watchable. The performances are searing. Paddy Considine mines a jet-black seam of intensity and coiled violence that matches his unforgettable turn in Shane Meadows’s ‘A Room for Romeo Brass’. Leo Gregory turns up the predatorial charisma, magnetism and sexual androgyny to the max. David Morrissey exudes dodgy-dudeness from every pore. Novotny and Mazur rise above the thanklessness of their roles. 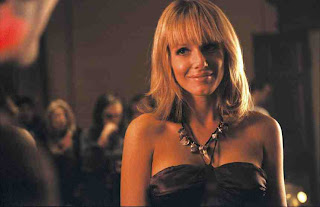 Good buy/bad buy?
I’m still undecided. There are significant problems and the film, in the final analysis, leaves a nasty taste in the mouth. But performances and soundtrack are excellent. It’s too flawed to merit a recommendation, yet it contains enough that’s commendable to disallow a perfunctory writing off
Fuck it: the Scottish verdict.
Posted by Neil Fulwood at 5:27 PM

"It’s too flawed to merit a recommendation, yet it contains enough that’s commendable to disallow a perfunctory writing off"

Yeah, I felt this way about the film too. While it had some really good performances from the cast (esp. Considine who I always find watchable), it had such an odd rhythm and lacked focus but still fascinating. Very conflicting feelings over this one.