Yes, you read that right. As Lieutenant Terence McDonagh in Werner Herzog’s magnificently unhinged crime thriller ‘The Bad Lieutenant: Port of Call, New Orleans’, Cage gives the kind of performance that not only sends you spinning back in time a couple of decades to recall his dementedly inspired heyday in the likes of ‘Raising Arizona’, ‘Vampire’s Kiss’ and ‘Wild at Heart’, but dredges up cinematic memories of the classic, borderline insane Herzog/Kinski collaborations. Indeed, it’s easy to claim McDonagh as Aguirre with a badge and gun, Fitzcarraldo with a yen for zydeco instead of grand opera. Like Aguirre, he enters the film absolutely fucking way off base of normal and just plunges headlong into a downward spiral of his own creating from there. Like Fitzcarraldo, he has a prostitute girlfriend and an aching desire, born of genuine romanticism, to strive towards a better life for them. Only whereas Fitzcarraldo does it with a rust-bucket old boat and the help of an indian tribe, McDonagh uses a gun and the dubious association of a drug dealer.

Reading back over that last paragraph, I notice that I’ve used “magnificently unhinged”, “dementedly inspired” and “borderline insane” in one sentence. This would normally be evidence of extremely sloppy writing and I’d stop right now and do a stringent editing job. But this is Werner Herzog we’re talking about – moreover, Werner Herzog tapping into Nicolas Cage at his most uninhibited (with Cage in turn drawing from the well of lunacy that fuels his director) – and anything less than gushing, aureate, over-the-top screeds of purple prose seems somehow inappropriate. Besides, it says everything you need to know about ‘Bad Lieutenant’ that the weirdest part of the aforementioned sentence is the proximity of “crime thriller” to “Werner Herzog”.

But enough of the etymology already! What about the film? How does Herzog fare with thrilleramics? What’s with the Bavarian maverick helming a remake? 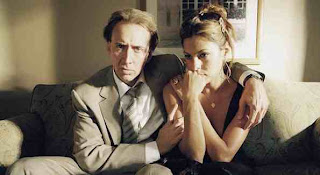 Ah yes, that’s the big question. I remember a couple of years ago when word of the project first filtered out. Cage had just racked up the unholy trinity of ‘The Wicker Man’, ‘Ghost Rider’ and ‘Next’ (the fact that fucking ‘Ghost Rider’ was the best of the bunch says it all!). Herzog was riding higher as a documentarian than a feature film director, having just released the immaculately well made but curiously un-Herzogian ‘Rescue Dawn’. The original ‘Bad Lieutenant’ was barely 15 years old and still firmly lodged in the cineaste’s consciousness courtesy of it constituting (a) the last truly great movie on Abel Ferrara’s CV and (b) the last truly great Harvey Keitel performance. There seemed no need at all for a remake.
I’ve read reviews that dismiss any comparisons between Ferrara’s film and Herzog’s as negligible. Herzog himself has stated that the ‘Bad Lieutenant’ part of the title was foisted on the film by the producer and that ‘Port of Call, New Orleans’ (a title I much prefer) is a stand-alone movie. There has also been talk that ‘Bad Lieutenant’ could function as a loosely collective title for any movie, set anywhere, which basically takes a morally compromised cop as its starting point and does its own thing from there. Maybe the much-mooted big-screen ‘Sweeney’ adaptation could benefit from the idea: ‘The Bad Detective Inspector – Port of Call, London’. Obviously, you’d need to cast Tom Hardy, reunite him with ‘Bronson’ director Nicolas Refn Winding and have him freak out whilst hallucinating Viking hoards before he knees some blagger in the face and announces “you’re nicked, tinkerbell” in order to recapture the sheer weirdness of what Cage and Herzog conjure from the material but, you know, it could work.
Ultimately, William M. Finkelstein’s script cleaves to only a couple of story beats from Ferrara’s film – the B.L. sexually coercing a young woman in return for looking the other way to a minor misdemeanour; the B.L.’s burgeoning gambling debts – but the scenes it references are so memorable it’s difficult not to entertain the earlier movie as a frame of reference. All told, it’s for the best that Herzog was in the director’s chair: with anyone else helming, the results would probably have been a weak retread. Herzog, however, makes it his own. He shoots post-Katrina New Orleans as an alien landscape. Alligators and iguanas lend POVs as essential and intriguing as those of any of the main characters. If you can imagine ‘Fata Morgana’ getting mixed up in the editing room with a James Ellroy adaptation, that should give you some idea – but only an idea, mind – of the bizarre delights of ‘Port of Call, New Orleans’. 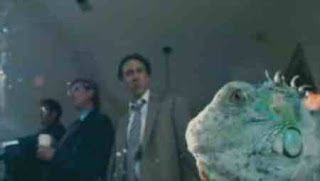 It’s probably redundant to warn that this film isn’t for everyone. There will be plenty who approach it expecting an industry standard crime thriller and start getting seriously freaked out round about the time the iguanas come into and most likely hit the off button the moment someone’s soul starts dancing. (Yes, you read that right as well.) But Herzog’s flaunting of genre requirements is made clear pretty quickly. There’s a scene where McDonagh and his equally loose cannon partner Stevie Pruit (Val Kilmer) haul someone in and question them. You know the kind of interview room scene. You’ve seen it a million times. Enclosed room, no windows, tape recorder running if the interviewee’s lucky, rolled up phone book in the face if they’re not. This is how Herzog does it: the interview room has a window; you can see traffic passing outside; the tension generated by Pruit’s unpredictable behaviour around the suspect is drained away very quickly as McDonagh sends Pruit outside and sits down to have a fairly genial conversation with the interviewee. The dialogue ceases to matter. Ditto the plot ceases to matter. The passing of traffic outside becomes somehow mesmerising, akin to the driving sequence in Tarkovsky’s ‘Solaris’. The denouement dares the laughable in deconstructing what a cop thriller should be. Herzog risks howls of derision, confident as only someone of eccentric genius can be that his audience are in on the joke.
And yet in the darkest, craziest scenes of ‘Port of Call, New Orleans’, Herzog and Cage go plunging into the abyss together, all out, balls to the wall, hell bent and no safety net. The end result is as memorable as anything either of them have done; a movie as unconventional as it is entertaining. I mentioned James Ellroy earlier and I meant it. I’d bloody love to see Herzog direct ‘The Big Nowhere’ or ‘White Jazz’. With iguanas.
Posted by Neil Fulwood at 7:38 PM

This is another great Nicolas Cage movie of recent, as along with Kick-Ass it shows just how explosivly great he can be with the right director, but then Herzog has always been good at wrangling cinema's crazies and this film, left me wanting to see them colaberate again.

Neil, I was waiting for you to cover this one, as I haven't yet seen it. There are few persuasive writers on Herzog, and you've sold me on this one. I'm now interested to see it because N.O. is a city very close to my heart and childhood. Great review!

Excellent, sir. I do miss Nicholas Cage as the batshit insane guy. Yet, nothing can beat the Herzog/Kinski level of insanity. I liked it anyway.

I was hoping you'd cover this one at some point. I enjoyed the movie a lot for all the obvious reasons. I'm not as well-versed in the world of Herzog as you are so I can't really compare it to his other films, but I thought he did a great job here. Him and Cage seem to be a good team and, like Herzog and Kinski, I hope they make many films together. My two favorite scenes in the film were 1) the iguana scene and 2) the breakdancing scene. They were completely unexpected little scenes that made me sorta scratch my head, but then it all makes perfect sense in the end and truly captures the "off" nature of both the film and its lead character.

I can't wait to see Herzog's MY SON, MY SON, WHAT HAVE YE DONE. Him teaming with Michael Shannon has the potential to be (hopefully) nothing short of awesome. Speaking of which, I loved Shannon's little cameo in POC: NEW ORLEANS.

And Hans, I figured you'd already seen this by now. You really gotta check it out and do a write-up on it as well.

Im dying to check this one out, probably will do so this week! Ive heard some dismiss it as crap, but thats probably because they like commercial films and dont "get" the wonders of watching a Herzog film.

Dying to see it!

Thanks for the comments, guys. Herzog is kind of a litmus test: sit an audience in front of one of his movies and you can tell pretty quickly who just wants to watch generic mainstream entertainment and who wants to engage with the work of a filmmaker who has a definite and unique vision. He's a lot like David Lynch in that respect. I understand that Lynch produced 'My Son My What Have Ye Done'; hopefully it'll get a UK release before much longer.

Looking forward to all and any of you guys doing a 'Bad Lieutenant' write-up.