THE SILLITOE PROJECT: the life of a writer 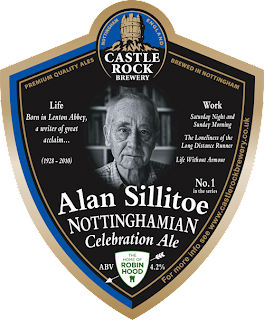 In late 2010, the Castle Rock Brewery announced a series of beers named after famous Nottinghamians. The first scion of the city they chose to immortalize in ale – before the likes of George Green, Albert Ball, Harry Wheatcroft or William “Bendigo” Thompson – was Alan Sillitoe. His most famous creation, Arthur Seaton in ‘Saturday Night and Sunday Morning’, would have bloody loved that!

I’m not going to go into too much detail in this article, merely establish a bit of context. Wider discussion of his life will be pertinent to the books under review. Moreover, there are two autobiographical works on the reading list – ‘Raw Material’ and ‘Life Without Armour’ – where Sillitoe discusses his life and formative influences in such powerhouse style that any biographical sketch I could offer is pretty much redundant.

Still, the basic facts: Sillitoe was born on 4 March 1928. His family, frequently poverty-stricken, lived in Radford. His father was barely literate and given to drinking and heavy-handedness. At fourteen, Sillitoe began working in a factory, a job he walked out of after a dispute over pay. Sillitoe’s rebellious streak manifested itself early. After a union official told him he’d be paying part of his wages as dues, that it was mandatory and that it was for his own benefit, he advise the official to “fuck off and get dive-bombed”. Sillitoe’s adherence to his own code – which soon solidified into a political and social conscience – is writ as large in his work as it was in his life. 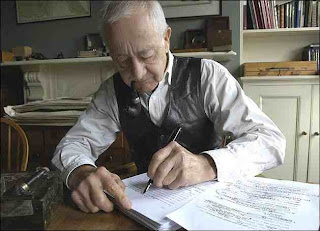 With the war drawing to an end and desperate to become a pilot, Sillitoe lied about his age to join the Ministry of Aircraft Production in 1945, where he worked for a year as an air traffic control assistant before volunteering for the Royal Air Force Volunteer Reserve. As The Telegraph’s obituary noted: “Although he was initially accepted as a pilot, the end of the war with Japan had rendered further pilots unnecessary, and Sillitoe served as a telegraphist and radio operator in Malaya. In 1948 he was diagnosed with tuberculosis and spent 16 months in a military hospital, where he began educating himself by reading Greek and Latin classics in translation.”

Between 1949 and 1958, Sillitoe eked out his disability pension from the RAF and wrote about half a dozen unpublished novels until, encouraged by Robert Graves (with whom he and his wife, the poet Ruth Fainlight, had formed a friendship), he began working on more autobiographical material. A series of short stories set in Nottingham and centering around the rebellious and pragmatic Arthur Seaton eventually cohered into the manuscript of ‘Saturday Night and Sunday Morning’. It was an acclaimed and successful debut, which he followed up with the short story collection ‘The Loneliness of the Long-Distance Runner’. Both were filmed, again boosting Sillitoe’s reputation.

His second novel, ‘The General’ (1960), marked a significant change in direction and left a number of critics – as well as a large swathe of his readership – perplexed. ‘Key to the Door’ (1961) saw him back on home turf with a chunky family saga focusing on Arthur Seaton’s older brother Brian. Sillitoe continued Brian’s story in ‘The Open Door’ (1989) and eventually reunited the older and wiser Seaton brothers in ‘Birthday’ (2001).

Elsewhere, Sillitoe’s increasingly political views came to the fore in the Frank Dawley trilogy: ‘The Death of William Posters’ (1965), ‘A Tree on Life’ (1967) and ‘The Flame of Life’ (1974). His short story collection ‘The Ragman’s Daughter’ (1963) considered reactionary themes, while his travelogue ‘Road to Volgograd’ was written after he visited the USSR at the invitation of the Soviet Writers’ Union. Although Sillitoe enjoyed a reputation in Russia like no other western writer, he was quick to criticize the regime. Sillitoe revisited his travels here, as well as chronicling more recent visits, in his last published work ‘Gadfly in Russia’ (2007).

He continued to diversify as a writer throughout the 70s and 80s, with 1968’s ‘Guzman Go Home’ showcasing a deft talent for picaresque narrative and absurdist humour. The Michael Cullen novels – ‘A Start in Life’ (1970) and ‘Life Goes On’ (1985) – are firmly rooted in the picaresque tradition, while ‘Travels in Nihilon’ is an inventive and often just plain bonkers political satire. ‘The Lost Flying Boat’ (1983) is an unapologetically old-school adventure story, ‘Down from the Hill’ is equally unapologetically nostalgic, ‘Her Victory’ (1982) is one of the best examples of a male author completely and empathetically creating a female protagonist, and ‘Raw Material’ is a visceral fusion of novel and autobiography. 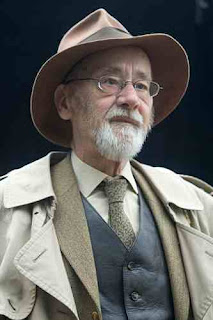 That Sillitoe punctuated these works with volumes of poetry, essays and children’s fiction only offer further proof of his continuing commitment to diversify and develop as a writer. His challenging and unflinching 1979 novel ‘The Storyteller’ examined the blurring lines between reality and fiction, bringing a gritty realism to material that many novelists have relied on the tropes of the horror or sci-fi genres to realize.

Sillitoe’s output was prodigious: factor in the kiddie fare, poetry, plays, translations and oddities such as ‘Leading the Blind’ (1997), a social history of the Englishman abroad in the nineteen-hundreds, and his bibliography stands at a good fifty volumes.

His life was marked by as great a sense of transience and wanderlust as his writing: he left Spain in the late 50s, thereafter dividing his time between England (he had homes, at various times, in Kent, London, Somerset and Diseworth, a village on the Nottinghamshire/Leicestershire border) and Montpelier in France.

Sillitoe published a volume of autobiography, ‘Life Without Armour’ in 1995, with an authorized biography, Richard Bradford’s ‘The Life of a Long-Distance Writer’ appearing in 2008 to coincide with his 80th birthday. Alan Sillitoe died, after a battle with cancer, on 25 April 2010.
Posted by Neil Fulwood at 8:14 PM