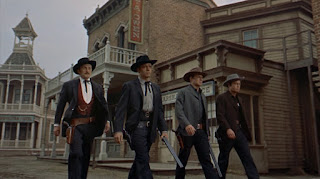 On 26 October 1881, Wyatt Earp, his brothers Virgil and Morgan, and John “Doc” Holliday faced off against the Clanton and McLaury brothers. The gunfight occurred in a cramped lot six doors down from the O.K. corral. Based on the weaponry utilised and the number of shots fired, historians estimate the whole thing lasted no longer than thirty seconds. There was, all things considered, nothing particularly dramatic about it beyond the obvious dynamic of one bunch of guys trying to kill another bunch of guys. Stripped of hagiography, the gunfight at the O.K. corral – or, to be more realistic about it, the gunfight somewhere near the O.K. corral – boiled down to this: two antagonistic parties pulled iron, blasted away till they were out of ammo and those who were still standing at the end of it lived and those who weren’t didn’t.

But to quote a line from ‘The Man Who Shot Liberty Valance’, “when the truth becomes the legend, print the legend”.

John Sturges’s ‘Gunfight at the O.K. Corral’ is the cinematic equivalent of the newspaperman printing the legend. From the time of the shoot-out (3pm in actuality, “at sun-up” in Sturges-ville) to the number of combatants (Johnny Ringo? dude wasn’t there) to the six minute gun battle that spills out from the corral and across half of Tombstone, Sturges’s film makes absolutely no pretence to realism. It also takes its sweet time getting to the gunfight.

Leon Uris’s script focuses on the relationship between Wyatt Earp (Burt Lancaster) and Doc Holliday (Kirk Douglas). Indeed, he and Sturges are so eager to spend time with the Old West’s most famous double act, that they’re pretty much rammed together during the opening sequence. Although the crossing of their paths from Dodge City to Tombstone calls for some degree of contrivance, this was probably a wise decision since Lancaster’s staunch, square-jawed lawman is a one-note character whose moral rectitude isn’t all that interesting. The alcoholic, tuberculosis-ridden Holliday is far more memorable, and Douglas has great fun playing him as a smooth bastard. Holliday is a man of fancy clothes, fine speech and a fast deck; he’s also an unblinking killer, whether using gun or knife, and – for all his faux courtly manners – not always the gentleman to long-suffering consort Kate Fisher (Jo Van Fleet). Their tempestuous relationship is contrasted against Earp’s ill-fated romance with lady gambler Laura Denbow (Rhonda Fleming).

Compared to these interrelationships, which spin around the core nucleus of the Earp/Holliday relationship, there’s not much room for other character dynamics. Virgil (John Hudson), Morgan (DeForrest Kelley) and James Earp (Martin Milner) barely get a look-in, nor do the Clantons or McLaurys fare much better in terms of screen time. Lyle Bettger’s curiously reserved performance as Ike Clanton leaves the film lacking a central villain, however John Ireland’s sneeringly nasty Johnny Ringo goes some way towards filling the gap. A youthful Dennis Hopper as the youngest of the Clanton clan also makes an impression.

Arguably the biggest strike against ‘Gunfight at the O.K. Corral’ is Dmitri Tiomkin’s horrible score, one of the few misfires in a career stippled with classic soundtracks, which recycles throughout the film an appalling ballad sung by Frankie Laine. Charles Lang’s dustily evocative cinematography certainly deserved a better aural accompaniment.

What remains, though, as the pace picks up in the second half, is what – essentially – audiences of the day wanted from a western; what, arguably, is an inimical to that genre as a black-gloved killer and a bottle of J&;B to the giallo: iconic images of tough guys striding purposefully towards their fate, hand on the gun. And a crowd-pleasing shoot-out when they draw.
Posted by Neil Fulwood at 10:14 PM