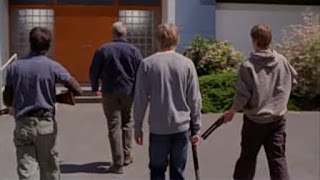 John Carpenter’s ‘Cigarette Burns’, a one-hour movie made as part of the ‘Masters of Horror’ TV series, was one of my faves from last year’s 13 For Halloween watch-list, so I figured his other contribution to the series would make a good pick for this year.

While it doesn’t boast the killer hook of ‘Cigarette Burns’, nor has it wormed its way into my mind quite so insidiously, the same combination of writers (Drew McWeeny and Scott Swan) and director still makes for an entertaining slab of small-screen scaremongering.

An opening montage of soft light falling through a canopy of branches suggests a peaceful evocation of rural American. A quick cut to a young girl running through the forest, fearful and glancing behind her, suggests otherwise. Running out onto a nearby road, she’s almost hit by Alex (Mark Feuerstein) and Kim (Emmanuelle Vaugier) who are en route to their workplace, an out-of-town abortion clinic. Persuading her to accompany them so they can check her over, Alex and Kim discover that not only is she pregnant but whatever’s gestating is doing so at an abnormally rapid rate.

They also discover that she’s Angelique Burcell (Caitlin Wachs), the fifteen year old daughter of Dwayne Burcell (Ron Perlman), a local fundamentalist Christian redneck with a beef against the clinic who’s already under a court order to stay away from the facility. Pursuing Angelique there, Dwayne and his three equally redneck sons lay siege to the place. Meanwhile, Angelique recounts the strange circumstances surrounding the conception and begs Alex and Kim to kill the inhuman life inside her. 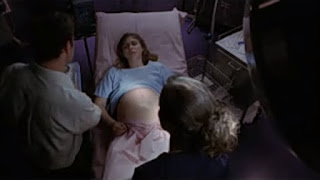 The key thematic concern in Carpenter’s filmography has always been the behaviour of characters under siege, either from without (‘Assault on Precinct 13’, ‘Prince of Darkness’) or within (‘The Thing’, ‘The Ward’), or by inexplicable events/supernatural forces (‘The Fog’, ‘In the Mouth of Madness’). ‘Pro-Life’ ticks the boxes across the board: Dwayne and his boys provide the threat from without, Angelique is attacked from within, and what she’s carrying threatens everyone.

McWeeny and Swan’s script is taut and delivers two particularly icky set-pieces, one during which the ideological differences between Dwayne and Dr Kiefer are demonstrated in gruelling terms, the other an ultrasound that brings to mind the defibrillation scene in ‘The Thing’. The fundamentalism aspect, established from the very outset (i.e. the title) as the motivational dynamic, is neatly subverted as the film progresses, firstly in the concept of a character called Angelique pregnant with something demonic, and secondly in the implication that someone who hears voices isn’t necessarily being directed by a higher power.

Performance-wise, Feuerstein and Vaugier don’t have much to do but look befuddled, while Wachs is sympathetic but underused as the beleaguered Angelique. Ron Perlman, his physicality alone enough to provide the requisite degree of danger, gives the film its frisson, playing Dwayne not as a scenery-chewing psychotic (although he does some pretty unsavoury things) but as a man utterly convinced that he’s doing the right thing. 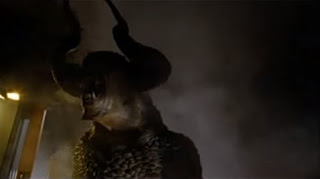 ‘Pro-Life’ fumbles the ball a tad in its denouement, rolling out a rather rubbery monster, but it’s a minor quibble. Carpenter’s milked the tension and the fun’s been had by this point anyway. Did I say “fun”? Sure did. It shouldn’t be, mind – we are, after all, talking about a fucked up little morality tale about abortion, religious fundamentalism and gun ownership – but there’s a sardonic and excoriating sense of humour behind it all that makes ‘Pro-Life’ more than worth an hour of the horror aficionado’s time.
Posted by Neil Fulwood at 8:54 PM