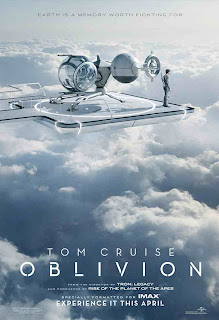 ‘Oblivion’ is a masterpiece of production design that desperately wants to be a cerebral Tarkovskian study of ravaged landscapes, existential turmoil and questions of identity … but has to, y’know, throw in some hamfisted mainstream narrative tropes in order to justify its budget.

Opening with a slab of voiceover exposition, we learn that an alien antagonist destroyed the moon (causing all manner of natural catastrophe) prior to invading Earth. Someone on Earth authorised the use of something called “the nimbus” (I’m guessing the President of the United States in the first instance and a heavy duty piece of thermo-nuclear kit in the second), effectively “winning the war but losing the planet”. Now there’s a radiation zone, a number of power plants that process Earth’s remaining air and water power to provide energy for off-world space station The Tet, and an atmosphere-straddling platform occupied by Jack (Tom Cruise) and Victoria (Andrea Riseborough), technicians who maintain the power plants and the drones that safeguard them. Oh, we also learn that Jack and Victoria had “memory wipes” in order to protect “the security of their mission” prior to taking the job. I assume this was done before their induction course. As the film begins, Jack is experiencing pre-destruction-of-Earth hallucinations which he assumes are memories, while by-the-book Victoria just wants to dot the i’s and cross the t’s and jet off to Titan (Jupiter’s moon, where the last enclave of humanity are holed up) when their detail ends in a fortnight.

Anyone who hasn’t even hazarded a guess about where this is going by now will probably view ‘Oblivion’ as an entirely original and genre-defining work. The rest of us will happily tick off its many and unsubtly referenced influences while we sit back and bathe in the visuals.

Because that’s the thing. For all that ‘Oblivion’ is a derivate piece of work (particularly in the increasingly hackneyed second half where it becomes a patchwork quilt of ‘Independence Day’, ‘I, Robot’ and ‘Moon’), it’s the most genuinely gorgeous thing I’ve seen on the big screen this year. Jack and Victoria’s cloud-based operations centre is kind of like a two-up-to-down designed by Frank Lloyd Wright complete with helipad and swimming pool. A scene in said swimming pool comes close to a sort of visual poetry. Director Joseph Kosinski and DoP Claudio Miranda conjure eerily effective visions of a dune-covered New York which are a million miles away from the usual post-apocalypse imaginings. The technology is memorably rendered, too: Jack’s scout craft and the drones themselves have a propulsive sense of movement and engineering, while also looking careworn and, despite their sleek profiles, realistically utilitarian in their design. Only the late-in-the-day visualisation of a maleficent supercomputer as a slightly misshapen amplifier covered in sentient mould lets the side down.

Performances vary: Cruise delivers with a likeable everyman persona; Riseborough finds nuances in a character who could have been decidedly one-note; Olga Kurylenko is saddled with a nothing role and does even less with it; Morgan Freeman continues to be one of the coolest blokes on the planet, claiming entire scenes for himself by doing little more than lighting a cigar or wearing a knee-length leather jacket.

The script is anodyne at best, edging into total mess on more than one occasion. Example: Jack gets shot in the shoulder at one point and the wound is never reference, depicted or treated for the rest of the movie. He’s shot and then, oh fuck it, he needs to do some heroic running, jumping and falling down stuff, so let’s all pretend he never took that bullet in the first place, ’kay?

Ordinarily, I’d have marked ‘Oblivion’ down for its failings, consigned it to the file marked “ho hum” and probably not ever bothered writing about it for Agitation. But I keep coming back to how damned good it looks, and to the world-building and attention to detail of its first half as Jack goes through the motions of a routine job in an extraordinary situation; a guy who punches the clock, patches up the drones, patrols the wastelands and somehow isn’t satisfied with the way things are; a guy who’s just starting to think beyond the accepted parameters.
Posted by Neil Fulwood at 8:49 PM

Glad you liked it man, I myself recognized all the influences as well, but as you say, I sat back and took in the visuals.

There's this scene where Jack (this is like the 500th film where Cruise plays a character named Jack!) is walking through the empty landscape and suddenly comes upon a lonely dog that was a direct reference to I Am Legend, where the exact samething happens to the main character.

There were many references to many films, yet somehow it didn't stop my enjoyment of the film, probably because it looked and sounded so good, there was something particularly cool about the music on the film, it's not Daft Punk, but it's in the same ball park, very techno and therefore appropriate for the film which is all about technology overpowering man.

Good call on the character name. Didn't make that connection at first, but you're dead right. Maybe scriptwriters think that "Jack" is a good Everyman name to suit Cruise's persona. I'm not his biggest fan by a long shot, but I really did like his performance in this. He got the balance right.