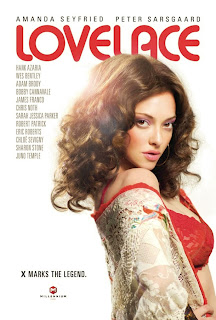 Walking back to the car after the film, I was viciously attacked by a gang of double entrendres. Now I can’t think of an opening to this review that doesn’t highlight the single biggest flaw of what could have been a decent film:

By which I mean, the script should have been more penetrating.

This mainly affects the final act when Linda Lovelace (Amanda Seyfried)’s gee-golly-gosh girl-next-door with barely a word to say for herself suddenly morphs into an eloquent proto-feminist. The transition is hard to swallow.

See what I mean?

‘Lovelace’ is a curious film: it wants to be a sincere account of how one woman survived controlling parents, a violent husband and the dubious glamour of the porn business; yet there’s a fnar-fnar prurience bubbling away just beneath the surface. And it’s not difficult to detect, since the film is all surface. Its two-part structure emphasizes the dichotomy: the first half romps through Linda’s seduction into the party lifestyle and marriage to bullying douchebag Chuck Traynor (Peter Sarsgaard), and manages to make the filming of ‘Deep Throat’ look like a veritable laugh riot (particularly ludicrous is the avuncular portrayal of the mob boss bankrolling the production); the second has Linda look back at this period of her life during the Q&A of a polygraph test her publishers have insisted on prior to the release of her memoir ‘Ordeal’.

The polygraph actually happened, although Andy Bellin’s script treats it as no more than a structural device. A brief scene where Linda reports, with some relief, that she passed the test is the only other reference to it. Spend about quarter of an hour reading up on Lovelace and the picture muddies: various contemporaries have questioned her claims about Traynor’s svengali-like treatment; there seems to be no record of similar behaviour during his ten-year marriage to Marilyn Chambers; Lovelace pulled an about-face on her anti-pornography campaigning by reviving her blue movie persona for a photoshoot for fetish magazine Leg Show in the 90s. About this time, she publicly complained that the feminists who supported her after ‘Ordeal’ was published – among them Andrea Dworkin and Gloria Steinem – didn’t offer her any kind of financial assistant. It’s also worth noting that psychiatrist Judith Lewis Herman has stated that, symptomatically, ‘Ordeal’ contains much to suggest complex post-traumatic stress disorder.

Clearly, there’s a story to be told about a deeply troubled woman and the motivations behind her various personas. ‘Lovelace’ fails to tell that story. In fact, it doesn’t even try. The script instead gives us parents who don’t show her enough love, and an embittered and controlling husband. Directors Rob Epstein and Jeffrey Friedman slot together a series of individually watchable scenes that ultimately add up to very little as the end credits roll. The period detail is nice, the soundtrack’s okay, Seyfried turns in some good work (though I found myself wishing the film had proceeded with Lindsay Lohan in the lead as originally planned), and there’s a solid supporting cast including James Franco, Juno Temple, Hank Azaria, Robert Patrick and an almost unrecognisable Sharon Stone. Sad to see Chloe Sevigny wasted in a ten-second cameo, though. Her character is billed simply as “feminist journalist”. Who knows, if there’d been a greater feminist sensibility to the film, or a rigorous investigation into its protagonist, it might have been something special.
Posted by Neil Fulwood at 9:56 PM

Oh gawd! I thought all that 50 Shades of Purple Prose nonsense was history. Seems I was wrong ...