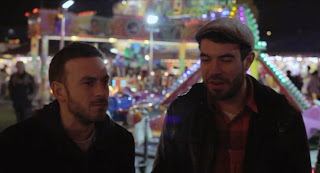 There’s always a moment, when you’re watching a film set in your home town, where you think what the fuck? Even the ultimate Nottingham movie – Karel Reisz’s ‘Saturday Night and Sunday Morning’ – has Albert Finney make a sharp left off a street that’s immediately recognisable even after fifty years and emerge in some London backwater that was close to Woodfall Films’ offices. In Andrew Haigh’s ‘Weekend’, some weird liberties are taken with Nottingham’s geography, while its tram system seems to have been incorporated purely for its cinematic potential rather than to facilitate an even remotely realistic navigation of the city for the protagonist.

And if that’s the only bad thing I’ve got to say about ‘Weekend’, then it’s safe to conclude that we’re in high quality indie territory and settle back to discuss a big-hearted but unsentimental relationships drama. Though perhaps it’s worth mentioning that if you don’t live in the city, there’s nothing to tip you off that ‘Weekend’ is a Nottingham film. There are no shots of the castle, the Robin Hood statue, the Forest ground, Trent Bridge or its adjacent cricket ground. There are no specifically local references in the dialogue. Even the names of the tram stops – David Lane, Phoenix Park – are generic and could crop up in any city. 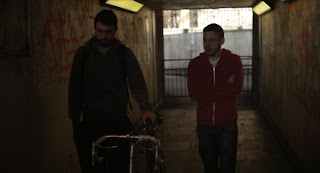 ‘Weekend’, then, is essentially AnyCouple in AnyCity; that the couple are gay and the city is Nottingham is almost incidental. The film is entirely about its characters, and for much of its running time is a two-hander. As the title suggests it covers 48 hours, beginning on Friday as Russell (Tom Cullen, whose performance I have no hesitation in describing as spellbinding) spends the evening with some straight mates and concluding on Sunday afternoon when a visit to his god-daughter’s birthday party takes an impulsive detour.

Russell is quickly established as not so much closeted but preferring the social equilibrium of a “don’t ask don’t tell” approach to his sexuality. Taking his leave of the hetero bunch as Friday wanes, Russell heads into the city centre and finds a gay bar (Propaganda, in case you were wondering). He wakes up with Glen (Chris New) and the nuances, uncertainties and sweeping passions of the early stages of any new relationship are distilled into a short time frame that proves – for both of them – exhilarating, frustrating and bittersweet in roughly equal measures. 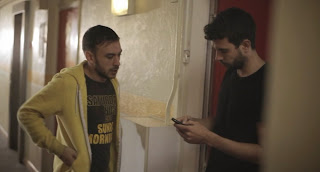 Russell’s a lifeguard at a swimming pool and remains aloof from the locker room badinage of his colleagues. Glen works at an art gallery (“The ugly one?” Russell asks in a slyly sarcastic dig at the Nottingham Contemporary). Ostensibly they have nothing in common. But as the weekend progresses, similarities (as well as differences) come to the surface. Glen, ostensibly the more free-spirited of the pair, is compiling an “art project” which consists of recording his lovers as he questions them about how they met and what it was like having sex together. Russell is initially reluctant to participate, but finally offers an emotionally honest account of himself. Later, it transpires that Russell keeps a sort of diary documenting a correlative personal history. Similarity and difference – thesis and antithesis if you like – combine in the juxtaposition of what holds them back: Russell’s trepidation in showing affection publicly (“well, it was a pleasure to meet you, lovely place you’ve got,” Glen enunciates sarcastically on Russell’s doorstep after the latter holds back from a goodbye kiss), and Glen’s insistence that he can’t get involved in a relationship. Glen at least has good reason for holding out: he’s leaving town on Sunday afternoon to start a two-year art school residency in America.

Unlike, say, Linklater’s ‘Before…’ trilogy, where the couple swan around various European cities as if their short time together were as endless as the films seem to be, the stakes in ‘Weekend’ seem immeasurably higher, the moment of separation hurtling towards both of them and so much yet to discover, so much remaining unsaid. Indeed, whereas Linklater’s moony pair are never short of verbiage, Haigh’s characters more often than not experience communication breakdowns, particularly in a single-take argument late in the film that runs for several minutes, during which both of them attempt to break through to each other only to inevitably reach for the wrong words and batter away at the brick wall of opposing opinions rather than trying for the neutral ground of compromise. Which is exactly how any passionate couple will behave: it’s the passion that blinds them. 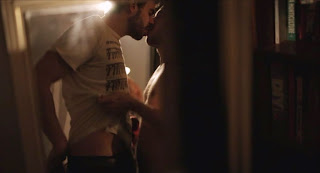 There’s a sneaky ‘Brief Encounter’ reference during the finale at a railway station – although, believe me, Nottingham station is no Carnforth! Haigh’s camera holds back, frames Russell and Glen through chainlink fencing: an effective visual metaphor for urban confinement, separation and the ineffable barrier – that of Glen’s leaving – that means their relationship can never blossom. And there’s the connection, nearly seventy years on and featuring the same-sex relationship that Noel Coward probably wanted to portray, with ‘Brief Encounter’: the idea of small moments of complete emotional experience snatched almost in defiance of the greater surety of loneliness and drudgery and dissatisfaction. “One moment of bliss,” opines the narrator of Dostoyevsky’s novella ‘White Nights’; “isn’t that enough for an entire life?”

‘Weekend’ throws itself against the horrible overwhelming totality of that question and finds, if not an answer, then at least a compelling justification for living for the moment.
Posted by Neil Fulwood at 8:18 PM

Neil, interesting insights as always. Thank you for the comment about Brief Encounter. I saw that film for the first time way into my movie-watching life and it was so obviously about a gay relationship I wondered if I was watching the same film everyone else had been talking about all those years. I suppose the truth is that Coward wasn't called The Master for nothing, and he created something ambiguous enough for everyone of any orientation to identify with.

I will be giving Weekend a pass, as I have a doctor's certificate exempting me from gritty English films set in gritty English places. Also films about Northern Ireland, slasher pics, Rom-Coms and anything starring Gemma Arterton.

And as you lament, why can't film-makers respect geography? Would it really hurt? Agnes Varda did in Cleo, Rohmer does, but maybe that's the difference: in their movies, Paris matters. London by contrast is just a string of tourist cliches. Place matters.

This is my new favorite review of this movie. I never really gave a second thought as to where the action took place, but your insights and even your little asides give it so much more context. I want to rewatch it right this second with all that you've said in mind.