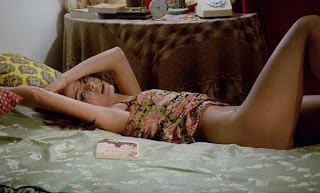 Some directors return obsessively to a single theme throughout their filmography. For Peckinpah, it was the idea of men outliving their times; for Bergman, the struggle for faith in a Godless world. For Jesús (Jess) Franco, it was naked ladies the work of the Marquis de Sade, particularly his 1795 novel ‘Philosophy in the Boudoir’. In this work, siblings Madame de Sainte-Ange and Le Chevalier de Mirval enlist the assistance of Chevalier’s bisexual friend Dolmancé in persuading the virginal (and underage) Eugenie into a life of libertinism.

Franco first approached the material in 1969 with the subtly titled ‘Eugenie: The Story of Her Voyage into Perversion’ starring Marie Liljedahl and Maria Rohm. Tonight’s offering, ‘Eugenie de Sade’, followed in 1970 – arguably Franco’s annis mirabilis, during which he also made ‘Nightmares Come at Night’, ‘Vampyros Lesbos’, ‘She Killed in Ecstasy’ and ‘The Devil Came from Akasava’.

He returned to all things Sadean with ‘De Sade’s Juliette’ in 1975, a sort-of companion piece to the earlier ‘Marquis de Sade: Justine’ (1968), ‘Erotic Symphony’ in 1979 and ‘Eugenie: The Story of a Perversion’ (with Katja Bienert as the titular nymphet) in 1980, the same year he made ‘Sadomania: Hell of Passion’, a women-in-prison film whose title is its only real connection to the writings of de Sade. Naturally, for such a prolific director, a certain reworking of material (did I put that politely enough?) is evident in the Franco canon, and many of his other films, while ostensibly not de Sade adaptation, are steeped in the admixture of pseudo-intellectual waffle and dirty sex that was the Marquis’s stock-in-trade.

So what makes ‘Eugenie de Sade’ (a.k.a. ‘Eugenia’, ‘De Sade 2000’ and ‘Eugenie Sex Happening’) stand out amongst Franco’s other takes on the material? What makes it ripe for evaluation on Winter of Discontent? Apart from the fact that it was streaming for free and I haven’t update this blog in a week, you mean? 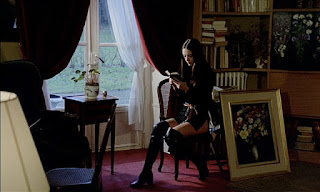 ‘Eugenie de Sade’ conflates Madame de Sainte-Ange and Le Chevalier de Mirval from ‘Philosophy in the Boudoir’ into one character: novelist Albert de Franval (Paul Muller, who I would describe as a Franco regular except that Franco only ever worked with regulars), and ups the ante on the controversy stakes by making Eugenie (Soledad Miranda) his step-daughter. The film unfolds in flashback as a badly injured Eugenie recounts to investigative writer Attila Tanner (Franco himself) the events that led to her hospitalisation. The Tanner character is an interesting diversion from the source material, reminiscent less of anyone in de Sade than of Clare Quilty in Nabakov’s ‘Lolita’ as his path crosses Albert and Eugenie’s at key moments in the story.

Although “story” is probably pushing it as a description. The glacially paced 91 minutes of this opus consist of Eugenie discovering pornographic works in her step-father’s library; her step-father discovering that she’s discovered them and demonstrated a certain moral indifference by way of response; and Albert and Eugenie then embarking on a quasi-incestuous sex ‘n’ killing spree, for all the world as if Humbert Humbert and Delores Haze had decided to get their Bonnie and Clyde funk on.*

Although “sex ‘n’ killing spree” is also pushing it as a description. By rights, ‘Eugenie de Sade’ ought to be a fast-paced sleazy romp. It’s actually glacial in both its pacing and its aesthetic. From its wintry landscapes to its concrete cityscapes, its low-lit clubs to its bland hotel rooms, the film plays out in a world leeched of colour. Even its most lurid set pieces – a kinky photoshoot that ends in murder; a drinking game that ends in seduction and death – proceed with not only a lack of narrative urgency or tension, but also very little in the way of erotic frisson. It’s as if Franco had made a specific artistic decision from the outset to use the film as a comment on the banality of evil. 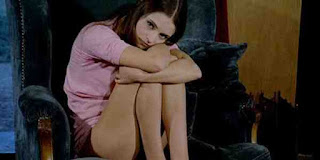 Compared to the sunny location work and lifestyle porn of ‘Eugenie: The Story of Her Voyage into Perversion’, or the unremitting focus on pain-as-pleasure in ‘Eugenie: The Story of a Perversion’, and this middle chapter in what can only be considered as a series of variations on a theme, emerges as the one in which the cruel self-centeredness of de Sade’s basic philosophy (as long as you’re the one taking pleasure, it doesn’t matter who gets hurt) is neither thrillingly sexy or orgiastically vicious, but steeped in ennui. This reading is emphasised by the presence of Soledad Miranda – a stunning actress, but a blank canvas for a director’s obsessions if ever there was one. She moves languidly and disinterestedly through the film, occasionally twitching out a half-smile that looks like it was carved with a razor blade, then sinking back into a sort of trance-like boredom.

The banality of evil, all right; but your average priest would still kick a hole in stained glass window just to get the slightest taste of it.


*Thankfully Franco makes Eugenie of age. Doesn’t excuse any of the other stuff that goes on the film, but – hey – it’s nice to observe some proprieties.
Posted by Neil Fulwood at 7:00 PM

Great review, duder! I don't know why (or what's wrong with me) but this film worked for me. I love it!