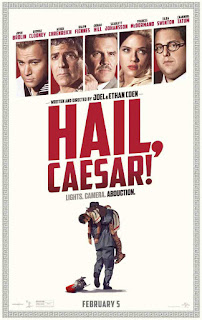 I was toying with the idea of structuring this review around my reading of ‘Hail, Caesar’ as ‘Barton Fink’ meets the gospels, but that would involve identifying Judas’s stand in and therein lies a major spoiler. Let’s just say that an oft-referenced but never seen studio boss is the Coen Brothers’ absent God, Scarlett Johannsen is the Virgin Mary and studio “fixer” Eddie Mannix (Josh Brolin) is Everyman and the film itself a chronicle of his long dark night of the soul.

Or you could possibly make a case for Mannix as Jesus, particularly in terms of his temptation, but I prefer the idea of naïve cowboy star Hobie Doyle (Aiden Ehrenrecih) as Christ, which would seem to work in context of his deliverance of Baird Whitlock (George Clooney) – a man who falls among, if not thieves, then writers … and communist writers, to boot.

Either way, the film starts with an image of Christ on the cross and ends with a purposefully hackneyed pan up to the firmament, so we’re definitely in religious territory. Mannix has his most soulful conversations in a confessional, and grabs prayer beads and silently implores the Almighty for guidance at his moment of greatest uncertainty. Granted, outside of his faith he happily slaps around anyone whose peccadilloes might bring the studio into disrepute, complicitly pays off kidnappers and deals with rival sibling gossip columnists (Tilda Swinton) with the aplomb of Machiavelli, but at heart he’s still Everyman, his path is a difficult one and his decisions don’t come easily.

Religion has always bubbled away in the background in the Coens’ filmography, be it John Goodman’s pseudo-Satan and the corridors of a fleapit hotel as an entryway to hell in ‘Barton Fink’, or the mass baptism in ‘O Brother, Where Art Thou?’, but it wasn’t until ‘A Simple Man’ that the theological truly shouldered its way to the forefront. ‘Hail, Caesar’ offers a scene of four religious spokesmen trading ecumenical verbal bitch-slappings that manages to say more about religion than ‘A Simple Man’ does in its entire running time.

Or I could be misconstruing things entirely and ‘Hail, Caesar’ is nothing more than an excuse for Joel and Ethan to restage some of their favourite scenes and genre tropes from the golden age of Hollywood. God knows, they certainly stuff enough of their own back catalogue into the blender. The obvious points of reference are ‘Barton Fink’ and ‘The Big Lebowski’: such narrative as ‘Hail, Caesar’ scrapes together (the film happily introduces all manner of characters, situations, subplots and symbolism only to completely forget them again) is basically a conflation of those two earlier films. But plenty of other moments from the Coen back catalogue are included.

It would, in fact, be very easy to write off ‘Hail, Caesar’ as the Coens doing sloppy, second-rate Coen copyism, but that misses out on how entertaining the whole big stupid shaggy dog story is. How entertaining and how intelligent. Weaving McCarthyism, socio-political debate, economics, faith, doubt, moral elasticity and spiritual angst into the fabric of its (un)reality, the Coens’ script is an exercise in Big Concepts played out against a deliberately superficial backdrop. Oh, and it’s laugh out loud funny for a good 80% of its running time.

A plot synopsis would be a self-defeating exercise, so I’m not going there. Analysis of individual performances? All over the place, from Clooney being spectacularly in on the joke and owning every scene he’s in, to Brolin effectively anchoring the film without actually doing anything he hasn’t done a dozen times already, to Jonah Hill in a cameo that proves that once you’ve worked for Scorsese you can blag your way into any prestige production, to complete unknown Ehrenreich basically writing himself a cheque for his entire Hollywood career in one magnificently conceptualised performance. An extended scene where Ehrenreich’s total rube and Ralph Fiennes’s snootily sophisticated director play off each other is pure delight on a level the Coens haven’t delivered in a good few years.

It’s a profoundly deep film and utterly throwaway at one and the same time. It’s about a lot of things and adds up to something slightly less than sweet fuck all. There’s a scene of the communist writers at rest, two of them demurely completing a jigsaw together, only the last piece doesn’t fit. That’s the whole film, right there.
Posted by Neil Fulwood at 12:08 AM