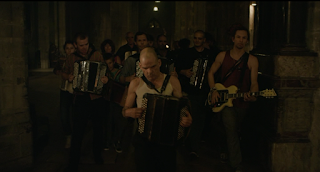 Leos Carax’s career has been turbulent and less than prolific. His 1991 dark romantic drama ‘Les Amants du Pont-Neuf’ was beset by delays, production problems and a spiralling budget. Despite favourable reviews and decent box-office, it was eight years till he helmed another feature – ‘Pola X’ – this time under stringent production perameters.

Apart from directing one segment of the portmanteau film ‘Tokyo’ in 2008, ‘Pola X’ was Carax’s last feature until he re-emerged four years ago with ‘Holy Motors’, a film I’ve only just caught up with. During the interim, Carax had apparently being trying to put the funding together for a large-scale English language production. ‘Holy Motors’ was conceived as a means for getting his work back onto the world stage in order to appeal to backers. Of necessity, it needed to be made on a comparatively small budget; to this end, Carax shot on digital rather than film, a decision made under sufferance.

It’s impossible to overstate how significantly these concerns infuse ‘Holy Motors’ aesthetically. The film is a testament to its own creation in a way that almost Felliniesque. 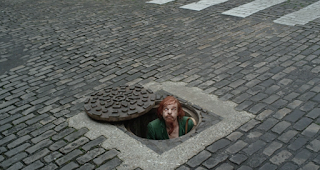 The batshit crazy narrative starts with a packed cinema auditorium, the audience gazing up in silent awe at whatever is playing out onscreen. Then we cut to a man in a hotel room near finding a hidden door in the wall. It leads to a cinema auditorium and he joins the aforementioned audience, watching the film with an admixture of disbelief and curiosity while a couple of dogs roam the aisles.

Then we’re into the narrative proper (which is kind of a relative concept, but bear with me) as Mr Oscar (Denis Lavant) leaves a very swish house and climbs into the back of a white stretch limo driven by Celine (Edith Scob). As she drives away, a black Mercedes following them closely, Mr Oscar conducts an urgent if somewhat non-specific telephone conversation which suggests that he’s some kind of businessman or consultant, an intimation compounded when Celine tells him he has nine appointments. 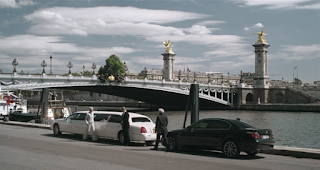 The rest of the film follows him (and Celine, and indeed the car which finally becomes a character in its own right) through the streets of Paris during a day and a night as he undertakes said appointments. It becomes clear from the first that he ain’t no kind of businessman! In fact, the cavernous space of the back of the limo is revealed as a mobile make-up and effects studio. Mr Oscar emerges at his first port of call in the guise of an old woman, bent double, and proceeds to beg on the street. In this endeavour, arguably the easiest logistically and the least dangerous – either physically or emotionally – of his appointments, he is watched over by two bodyguards who unfolded from the Merc. Later, when Mr Oscar is variously fulfilling the roles of kidnapper, hitman and gangster, the bodyguards are nowhere to be seen. It seems to be a comment on the precariousness of filmmaking, particularly for the auteur; the big men in the suits are there when you’re rattling the begging bowl, but you’re on your own for the rest of it.

There’s more than an implication of auteurism vs the mainstream when Mr Oscar at a a studio that looks more like a factory (I really don’t need to point out the obvious here, do I?), dons a motion-capture suit and is put through his paces by a stentorian offscreen voice. He runs, jumps, fires a weapon and engages in a bizarrely choreographed sex scene (a cutaway reveals that the CGI being layered over it depicts two monsters fucking). 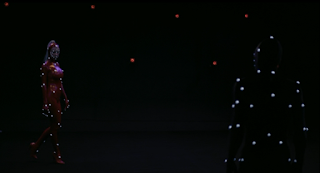 The aesthetic irrelevance of modern cinema – digitally shot; soulless; a product – is emphasised when a mysterious character who might be Mr Oscar’s controller or maybe just a film critic shows up in the back of the limo and observes that Mr Oscar is getting “tired” and quizzes him on why he still does the job. “The beauty of the act,” comes the response, albeit with a caveat that most people “don’t see the cameras anymore”. (A comment on multi-media? A description of the mainstream audience as guzzlers of product with no appreciation of craftsmanship?)

Later, a low-key appointment has Mr Oscar taking the role of a young girl’s father, driving her home from a party and growing angry at his investment of time and money (“we stayed in Paris for your first party”) in what was intended as an encouragement of her social skills, only for the girl to lock herself in the bathroom in a fit of self-consciousness. She should have been more “easy-going”, he admonishes her, and got the same response from boys that the popular girls do. As parental advice goes, it sets a new level in inappropriate. As a metaphor for Carax’s own disappearance from the scene (“you could be more easy-going” now reading as “you ought to pursue more commercial projects”), it’s bluntly effective. And Carax wittily points up the intellectual pointlessness of him trying to make a generic mainstream film with a series of genre deconstructions – in particular, the existential cool of Jean-Pierre Melville’s iconic crime movies is mercilessly subverted. 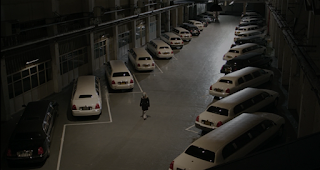 Genre riffs are in bountiful supply during the first half. Proceedings halt for a weird intermission featuring a musical number staged in what I can only describe as an accordion off. Then Carax gets Mr Oscar back into the limo and the limo back onto the streets and the entire tone of ‘Holy Motors’ changes. Melancholy pervades. Mr Oscar’s guises make him look increasingly older. An encounter with the enigmatic Eva (a career-best Kylie Minogue) takes Mr Oscar through the rubble-strewn abandonment of a once-great edifice (again, I don’t need to spell it out, do I?), as events move towards a mournfully inevitable conclusion. Whether Eva is Mr Oscar’s ex, his opposite number or merely a wistful fiction is, as much anything on offer here, open to interpretation. Ditto the meaning of the antepenultimate scene – Mr Oscar’s final appointment – which is rich in the imagery of regression.

As for the absolute final scene, and its implications regarding the film’s title, I wouldn’t dream of giving anything away. It’s an audacious sign-off, borderline silly, and I’m filled with amazed bewilderment that Carax even thought he could get away with it. That he actually does is something to embrace delightedly.
Posted by Neil Fulwood at 6:57 PM