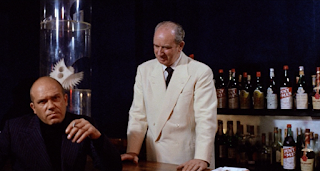 Gastone Moschin wants a word. He’s aware that it’s been small beer on The Agitation of the Mind recently. But he has bigger fish to fry than the one-a-week musings on the latest releases. Gastone wasn’t happy about last year’s Winter of Discontent. Four reviews. Four fucking reviews? Gastone advised your humble blogger that he had about three seconds to explain otherwise I’d be wearing the J&B instead of drinking it.

The facts of the matter are banal in the way that evil is always banal. I’d started last year’s Winter of Discontent – this blog’s annual celebration of all things exploitative, venal, cynical and sexually objectified – in high spirits. I had a whole slate of movies lined up. Then the coterie of Oxbridge entitled pig-fucking bully-boys otherwise known as the Conservative Party decided they wanted to bomb Syria. Because, hey, what better way to stem the immigrant (or, as I prefer to call them, refugees) crisis than to displace entire swathes of people? Rather than mounting an effective counter-vote, Jeremy Corbyn’s Labour opposition schismed, the Blairites crawling out of the woodwork. Particularly galling was Hilary Benn, son of the legendary Tony Benn (the closest I have to a political hero) in support of military intervention. I’d been riding a high following the publication of ‘More Raw Material: work inspired by Alan Sillitoe’, an anthology of new writing I’d edited with David Sillitoe, and I came crashing down. I underwent a month-long depression. The only thing I could feel was abject despair.

I’m feeling a similar thing know, as my country teeters on the verge of a referendum as to whether to leave the European Union. The pound is already in freefall. Trade agreements with Europe and the checks and measures that the EU provides in terms of health and safety, workers’ rights, maternity leave and pay for working mothers, let alone any considerations of unity, multiculturalism and shared post-war heritage could easily be swept away in a tide of insular backwards-looking nationalism. I already live in a Britain where a one-time fringe party like UKIP has somehow managed not only to infiltrate the political mainstream but actually define the dialogue; where right-wing hate groups like Britain First and the EDL could easily follow in UKIP’s footsteps.

But whereas the UK’s shameful intervention re: Syria drove me away from B-movie gratuitousness, the referendum has got me thinking about cinematic representations of social and political dystopia. I now have three reviews for Winter of Discontent in the bag and a viewing list that will probably do no favours for my mental health. Whichever way the vote goes on Thursday, I think I can guarantee a Winter of Discontent that will be contentious, cantankerous, challenging and anything else you can think of that starts with “c”.