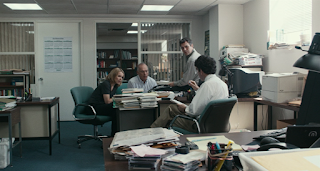 Those who know me will be aware of my attitude to Best Picture winners. It started the year that ‘Anti-Intellectualism: The Movie’ (or, as most people know it, ‘Forrest Gump’) walked off with the gong when anyone with the slightest claim to being a cineaste knew full well that was the year that ‘Pulp Fiction’ – love or loathe its creator – basically redefined American cinema, let alone ‘The Shawshank Redemption’ and ‘Quiz Show’ filling out the list of nominees.

Don’t get me wrong, there are plenty of Best Picture winners I actually like. They just weren’t necessarily the best of their particular crop – often by a long chalk. Or they weren’t the film their director should have won for. Scorsese – the legend behind ‘Mean Streets’, ‘Taxi Driver’, ‘Raging Bull’, ‘The King of Comedy’, ‘Goodfellas’ and ‘The Aviator’ – finally got his gong for ‘The Departed’, an overlong and unfocused remake of a film that was so stylistically and structurally perfect it should have been left the hell alone.

‘Spotlight’ isn’t the first “message” film to win Best Picture – scroll through the Wikipedia entry on Best Picture winners and count how many “war is hell” or “white man’s guilt” crop up – but it’s one of very few that approach their subject with restraint, intelligence and dignity. ‘Spotlight’ deserves every accolade that’s been lobbed in its direction, and its deserves them for many reasons, but its highest achievement is the dignity with which director Todd McCarthy imbues the thorniest of material. 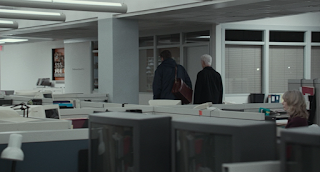 The story it’s based on needs little recapping: newly appointed Boston Globe editor Marty Baron (Liev Schrieber) tasks Walter Robinson (Michael Keaton), editor of the Spotlight investigative journalism team, with following up on an op-ed column about lawyer Mitchell Garabedian (Stanley Tucci)’s allegations that the actions of a paedophile priest were covered up by the Archbishop of Boston, Cardinal Bernard Law (Len Cariou). Robinson and his team – Michael Rezendes (Mark Ruffalo), Sacha Pfeiffer (Rachel McAdams) and Matt Carroll (Brian d’Arcy James), overseen by Assistant Managing Editor Ben Bradlee Jr (John Slattery) – painstakingly uncover evidence that it’s not one pederast priest in Boston whose crimes have been covered up, but close to 90. Working with survivors’ groups and counsellors, a bad decision from Robinson’s past comes home to roost: that he was given material years earlier that could have been the bedrock for a much earlier investigation, but failed to act on it.

Keaton’s performance is one of his best, the rigid façade of professional detachment barely slipping – even in a heated argument with Rezendes where the latter, shaken by the material they’re dealing with, urges Robinson to go to press early – and just smallest crack appearing when he finally admits to his complacency in not pursuing the story first time round; but the smallest crack is all you need. There’s a world of regret in his eyes and he seems to diminish, ever so slightly, in relation to the mise en scene.

The rest of the team have their individual moments of near-breaking-point, the most squirmy being Carroll’s when he realises that a “treatment centre” – a sort of halfway house where paedophile priests are sequestered – is just a block away from his house. From his children. The film could have spiralled into melodrama here, but McCarthy stages the scene observationally, letting the significance of Carroll’s discovery carry its own weight, and playing James’s response as helplessness rather than chest-beating outrage. Ditto Pfeiffer’s turmoil – everything reduces to a point of domestic banality where a recalcitrant dishwasher is the straw that breaks the journalist’s emotional equilibrium.

Mainly, though, McCarthy structures and styles the film as a procedural. Indeed, its unpretentious cinematography and sense of documentary realism are evocative of ’70s classics ‘The French Connection’ and ‘Three Days of the Condor’, except without the thriller elements. The set-piece where Rezendes races against time to requisition a file from the courthouse before the church’s legal eagles can bury it is the closest ‘Spotlight’ comes to an action scene. Mainly, it’s a film of people talking in various locations – anonymous rooms, utilitarian offices, coffee shops, rainy streets – and it’s never less than utterly compelling. 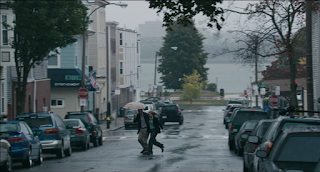 The script never shies from what Boston’s deviant priests have done – and not just Boston’s: a chilling end-credits crawl states the locations of church-sanction abuses uncovered subsequent to the Spotlight investigation; widespread is an understatement – but a human voice is always found and each survivor’s story is dignified by sympathetic performances and the bigger picture of lives lived in an ongoing struggle to define themselves by something other than that which was done to them.
Posted by Neil Fulwood at 8:45 PM