WINTER OF DISCONTENT: The Book of Revelation 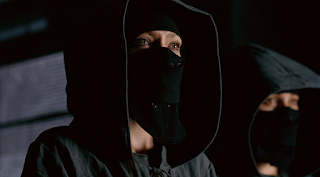 Ana Kokkinos’s second directorial outing is an honourable attempt to do justice to a Rupert Thomson novel. Thomson is one of Britain’s most inscrutable yet intellectually fascinating novelists. He never repeats himself; does something different with every book. Challenges expectations. In one novel, he tells half of one story, hands over to a different narrator for the last 150 pages and cavalierly leaves the whole thing unfinished. His prose is so perfectly turned, every sentence a masterpiece in miniature, that he makes Paul Auster look like he rushes it. Little wonder that it’s often four or five years between new Thomson titles.

Little wonder, too, that there’s only ever been one adaptation of his work. (Though I’d love to see what Ben Wheatley take on ‘Divided Kingdom’ or Martin McDonagh square up to ‘Soft’.)

Kokkinos relocates ‘The Book of Revelation’ from Amsterdam to Melbourne (I’d guess for budgetary reasons, Kokkinos being based there) and the film automatically loses a something, the dark sensuality of Thomson’s descriptions of Amsterdam unmatched by any visual conjuration of Amsterdam that Kokkinos can manage. Nor does the scene in which the protagonist is kidnapped by a triumvirate of masked and caped women come across as the surreal and disturbing set-piece of the novel. Here, it actually seems quite silly.

And here we find ourselves with an opportune moment to take a stroll through Plot Synopsis Plaza. Take my hand, gentle reader, let’s stroll through the sun-dappled streets and talk about kidnapping, sexual molestation, dildos and the undecidedly improper use of a screwdriver. Let’s talk about PTSD, the loss of the self and the desperate search for meaning. Let’s talk about Daniel (Tom Long), a narcissistic dancer who, with brittle girlfriend Bridget (Anna Torv), is appearing in a ballet choreographed by demanding perfectionist Isabel (Greta Scacchi). During a break in the final rehearsals – opening night is that same evening – Daniel goes out to get a pack of cigarettes for Bridget, an errand she sends him on to get him out of the way of another dancer, and doesn’t return. Isabel asks her ex-husband Olsen (Colin Friels), a cop who specialises in investigating sex crimes, to make some off-the-record enquiries. Twelve days later, Daniel resurfaces, traumatised and struggling to express himself. His relationship with Bridget implodes. He has difficulty re-engaging with his art. He walks out on everything, moves into a shitty apartment, takes a job as a bartender, and immerses himself in city’s underbelly as he tries to make sense of what happened to him and track down his abductors. 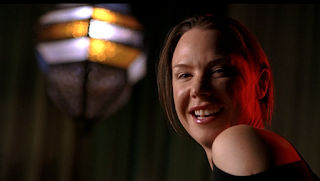 For its first half hour, ‘The Book of Revelations’ manifests as an effective mystery. Long is an inscrutable main character, haunted and enigmatic. Torv resists the audience’s sympathies, her own motives just as cloaked. Scacchi does some of her best screen work, creating a character who is driven to focus everything left in her (it’s revealed at a crucial moment that Isabel does not have long to live) through the vessel of someone whose brilliance she admires even if his arrogance prevents him from being truly great. Throw in Friel’s admirably understated Everyman performance, effectively anchoring the film’s artier pretentions, and everything sits together nicely.

And here we find ourselves at the essential-difference-between-a-book-and-a-film dialectic that so often informs discussions of ‘A Clockwork Orange’. Where Anthony Burgess wrote his novella in a hyper-stylised semi-invented language that screened the reader from the viscera of the events Alex the Droog is narrating, Thomson’s novel also uses a technique designed to distance the reader, albeit one as simple as switching from Daniel’s first person narrative for the pre-abduction and post-abduction scenes to a cool, cerebral, almost removed third person for the really nasty parts of the story. 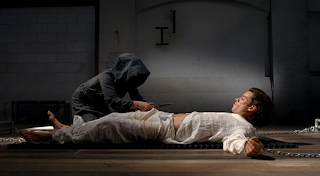 Kokkinos doesn’t even try to find a filmic equivalent, i.e. experimenting with POV, but what she does is double down on the arty seriousness at every opportunity. Which is, theoretically at least, a commendable decision, pulling the rug from under anyone who approached the film for the nudity and violence, but which also renders long stretches of it (‘The Book of Revelation’ clocks in at just under two hours) po-faced and narratively stagnant.

The final act – Thomson’s stroke of genius in the book as he seems to propel Daniel towards the revelation of the title only to rob him of it at a terrible cost – is, in the film, mired by Kokkinos’s inability to find the right register. Daniel’s nascent relationship with idealistic student Julie (Deborah Mailman) is scuppered by an absolute lack of chemistry; and his renewal of his working relationship with Isabel is handled better, but the cathartic routine he pitches to her is so achingly earnest it almost tips over into parody. His misidentification of one of his tormentors works more effectively, but what resolves in the novel in a resounding last line comes across as a damp squib onscreen.

Still, when Kokkinos gets it right – which accounts for more of the running time than when she doesn’t – ‘The Book of Revelation’ is an effective and compelling piece of work. It’s ironic, though: her fidelity to Thomson’s text – and her one geographical deviation from it – comprise the film’s two biggest problems.
Posted by Neil Fulwood at 10:24 PM

On EasyHits4U you can earn free advertising credits by visiting other ads from a membership base of over 1.2 million accounts. Earn credits faster with a view per view model.