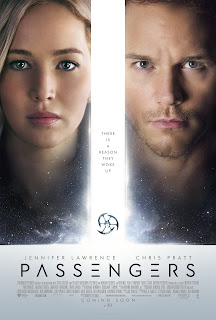 ‘Passengers’ is the most amiable 12A rated film that ought to be a solid 18 rated exploitationer that I’ve seen in a long time. And there’s no way I can talk about it in a remotely useful way without flinging SPOILERS out left, right and centre.

Okay, I’m exaggerating: there’s only one spoiler that I need to fling out, and I’m not sure that it even constitutes that much of a spoiler, but let’s assume – and it’s a fairly safe and logical assumption – that most movie-goers base their movie-going on trailers and proceed from there.

The trailer for ‘Passengers’ has it that Chris Pratt and Jennifer Lawrence are in suspended hibernation on a long-haul space flight only they wake up 90 years before the ship is due to make landfall (planetfall?) and all kind of shenanigans ensure including matey banter with Michael Sheen’s android barman, falling in lurve, and a desperate attempt at something or other when the ship goes tits up in the IT department and shuts down.

So far, so mainstream: soft sci-fi romantic drama starring to extremely attractive people. Let’s face, you could be of any sexual persuasion and abjectly loathe science-fiction and you’d probably still go and see ‘Passengers’ because Chris Pratt and Jennifer Lawrence and you’d swing either way in that particular dynamic and say thank you afterwards.

But what the trailer doesn’t imply – what the trailer in fact goes to great lengths to keep off the radar – is that it’s only Pratt, playing a character whose name I had to look up on IMDb no less than an hour after watching the movie, that’s how fucking disinterested in characterisation the film is, who is awakened thirty years into a 120-year flight after his pod malfunctions and spends the first fifteen minutes or so of the film engaged in the following activities: trying to find out what happened and repair the fault; flipping out because he can’t; yakking it up with the bartender (who’s kind of like the bartender in ‘The Shining’ only he never “corrects” anyone); abusing the ship’s online entertainment system; and, after a year of solitude, getting so utterly drunk and depressed that he finds himself with only two choices: commit suicide or wake somebody up for companionship.

(You can see where this is going, can’t you?)

Credit where it’s due, Pratt’s character – let’s call him Hunky Mechanic Dude – opts for suicide as a first choice. Pussies out, though. Then he goes all “big moral debate” on the waking someone up thing, right down to interrogating the passenger manifest and accessing the records of his fellow passengers (information governance, anyone?), very quickly fixating on Jennifer Lawrence’s character, whose first name was Aurora because, y’know, stars and shit. So, after much browbeating and agonising – … oh, who the fuck am I kidding? – after about five seconds flat Hunky Mechanic Dude decides to reawaken the Hottest Blonde Chick On The Entire Fucking Spaceship. And then let her think that her pod malfunctioned the same way his did. And then dissuade her from engaging with a solution to the problem. And then allow a sexual relationship to develop between them.

Which pretty much turns Hunky Mechanic Dude into Skeazy Stalker Rapist-by-Default Dude. Not that Jon Spaihts’ screenplay doesn’t do its almost damnedest to rationalise HMD (a.k.a. SSR-b-D)’s behaviour. He reads Aurora’s file before waking her, discovers she’s a writer, samples some of her work and is impressed by her intelligence. (Nope: still a skeazy rapist-by-default.) Post-awakening, he “gives her space” before he makes his move. (Nope: see above.) When the fucked-up-IT-shit hits the fan, he embarks on a course of action that could end his life in order to save the lives of the 5000 or so other sleepers. (Nope: still a scumbag, albeit a fairly brave one.)

Oh, and regarding that saving-the-lives-of-everyone-else business? Said narrative arc is introduced immediately after the Aurora (understandably) wigs out big time about Hunky Mechanic Dude being Skeazy Stalker Rapist-by-Default Dude, and serves purely to get them back together. The way this boy-rapes-girl-by-default-girl-finds-out-boy-gets-girl-back obstacle is hurdled comes by way of a third individual reawakening after their pod malfunctions – in this case, a senior crew member who has access to various protocol levels (not to mention a tendency to dump exposition like a chemical company dumping waste) and who conveniently expires shortly after giving Weirdly Back On Romantic Hero Duties Dude all the information he needs to save the day.

After which How The Fuck Am I Supposed To Feel About This Dude Dude saves the day.

This is the truly weird thing about ‘Passengers’: you could take the entire film, cut out the bit where Chris Pratt is basically a skeazy stalker/rapist by default, drop in the briefest of scenes where Aurora’s pod malfunctions at the same time as his, and the rest of the film (absent, of course, the Aurora-finds-out scene) would play out exactly as written without imbalancing the film in any way, and actually giving us a romantic hero who would actually tick both of those boxes. Indeed, the raising-the-stakes finale would play better as the relationship would be genuinely and there would be infinitely more to lose for both protagonists.

Granted, there are plenty of other minor issues: Pratt’s character, as a lower grade passenger, can’t get a cappuccino or a full English in the automated breakfast bar, yet seems to have an open account at all of the ship’s restaurants and manages to rewire some circuitry so that he has access to the best quarters available; he’s a mechanic, but he wants to start a new life on a new planet so he can build a house (a mechanic is not an architect, builder, carpenter, plumber or electrician; try building a house without any of those guys); the way the ship creates its own gravity is scrupulously established then immediately forgotten about the moment the script needs to generate some tension.

On the plus side, the production design is a thing of beauty (the last time I wanted to live in a sci-fi environment was Tom Cruise and Andrea Riseborough’s cloud base in ‘Oblivion’), Sheen is terrific, the hour-forty-eight minute running time doesn’t outstay its welcome, and the leads are mighty attractive (even if both give awful performances). Everything considered, ‘Passengers’ emerges as watchable fare: it’s just weird to the point of perverse that it purposefully made the one narrative decision that robs of it of being the slick, enjoyable piece of escapism it unequivocally should have been.
Posted by Neil Fulwood at 8:23 PM