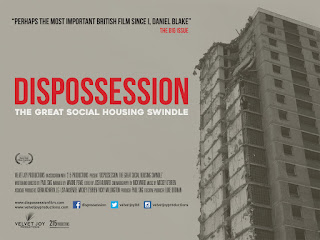 Julien Temple’s ‘The Great Rock ‘n’ Roll Swindle’ posits that there’s no such thing as rock ‘n’ roll. It does so by mapping out a fictive account of the Sex Pistols’ formation and rise to notoriety, every aspect stage managed and the band’s popularity nothing but a money-grabbing con job. When even something as working class and reactionary as punk is little more than another establishment sleight of hand, Temple seems to be asking, what can you trust?

Paul Sng’s ‘Dispossession: The Great Social Housing Swindle’ asks a similar question: when the very concept of affordable housing is unmasked as anything but, what hope is there for the working class, the poor, the vulnerable, the disenfranchised? What quality of life for those whose only aspiration is a roof over their head?

The similarity in titles is no coincidence: Sng’s previous film ‘Sleaford Mods: Invisible Britain’ showcased the UK’s angriest band kicking against the country’s political culture of austerity. Sng is keyed into the reality of life lived without support, sympathy or safety net. Two films into his career and he emerges, already, as an exemplary chronicler of the social underbelly and the establishment’s investment in keeping the poor and vulnerable poor and vulnerable.

Clocking in at a taut 82 minutes, ‘Dispossession’ economically deals with over half a century of social history, charting the progressive achievements of Clement Attlee’s post-war Labour government to provide for its least-advantaged citizenry, to the free-market driven attitude of the Thatcher era. The right-to-buy scheme turned council houses into pieces in a huge property game, and the prevalent socio-political model was one that rewarded greed, divided communities and trampled on the underprivileged.

Thatcherism is something Britain has never quite recovered from: last year’s referendum scratched the surface of the country and right-wing belligerence came bubbling up; since then, Theresa May’s increasingly out-of-touch leadership has seemed more and more like a Z-grade Margaret Thatcher tribute act. The cluster of disasters on her watch during, and just after, the ill-advised snap election culminated in the Grenfell Tower fire. I saw ‘Dispossession’ at Nottingham’s Broadway cinema just days after the Grenfell disaster and it gave an already hard-hitting documentary even greater relevance.

Sng focuses on the St Anns estate in Nottingham, Tower Hamlets and Cressingham Gardens in London, and Govanhills and the Gorbals in Glasgow. In respect of the latter, Scottish First Minister Nicola Sturgeon appears in interview and admits that improvements are unlikely to happen along a timeline that residents would wish for. She presents as calm and reassuring but Sng’s DoP Nick Wood captures images that tell a different story. Still, kudos to Sturgeon for appearing; she and Green Party leader Caroline Lucas are the only MPs who contribute.

Elsewhere, councillors and property developers (and those with fingers in both pies) decline to put forward their side of the story. The silence is particularly damning from those behind the Cressingham Gardens redevelopment, where the current residents, who put forward a “People’s Plan” to regenerate the estate, are ignored despite their plan being highly workable and their protests visible. The proposed redevelopment will see the estate bulldozed and replaced by luxury flats. Of the 1034 homes that look set to be demolished – ‘Dispossessed’ ends with Cressingham residents vowing to continue the fight – only 82 of a proposed 2704 new residences are earmarked for social housing. The result will be the death of a community, with families (as well as single and/or vulnerable residents) scattered and rehoused in any number of far-flung places. The only winners here will be the property developers.

But that’s what this is all about. We haven’t come that far from the slum clearances and dodgy landlords of the Victorian era, a fact that ‘Dispossession’ identifies with palpable bitterness. The film also tackles the concept of gentrification, noting that historically this was a gradual process of social development. Gentrification nowadays is a bullyboy council wielding a compulsory purchase order on behalf of a property developer with an eye on overseas investment.

With the odds stacked in the establishment’s favour, what can be done? Education, to begin with – see the film, visit the website, read up on the various campaigns. Then be active: support said campaigns, badger your MP, use social media. Get angry. Demand that the government be held to account.

Narrated by Maxine Peake (one of the most socially conscious and politically active talents in British cinema), ‘Dispossession’ is a film for our times. I can’t think of a single more important documentary feature to come out of Britain in the last decade.
Posted by Neil Fulwood at 4:13 PM

Professional trading signals sent to your mobile phone every day.

Start following our signals today and earn up to 270% per day.