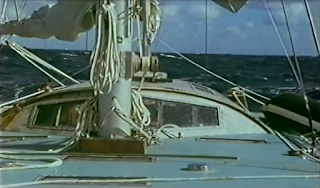 To the best of my knowledge, the first documentary about the Golden Globe debacle was Colin Thomas’s ‘Donald Crowhurst – Sponsored for Heroism’ which aired on British TV in 1970 and is described in this excellent New Statesman article as “dour, scathing”. Having been unable to track down a copy or find it online, I found myself turning instead to ‘The Two Voyages of Donald Crowhurst’, an Arena documentary from 1994.

It’s a curious piece of work, this. The approach to the material is clinical to the point of detachment, with a voiceover delivered in the kind of vaguely condescending cut-glass English accent that suggests it was made the Fifties rather than the Nineties. With a running time just short of half an hour, it doesn’t allow itself the necessary breathing space to consider the subject matter in the depth it requires.

Particularly galling is the lack of attention paid to the other entrants in the race, and the whistlestop pace the documentary assumes in charting Crowhurst’s premeditated decision to post fictional updates of his journey, to the point at which madness overcomes him and he struggles with cosmic considerations of time, the universe and religion. ‘Two Voyages’ fails to communicate the sheer amount of time he spent in his own company, or to plumb the psychological fall-out of a man having to live with the impossible decision he made – a man alone, struggling to keep afloat an ill-prepared vessel, missing his family, terrified at the thought of financial ruination and reputational humiliation – for so long without being able to share the burden or make confession.

This aspect is especially frustrating since the documentary makes good use of Crowhurst’s own footage of the voyage. When he set out, the BBC gave him some sponsorship money, a cine-camera and a tape recorder, the intent being that he would keep an audio-visual log correlative to the written one and return with material that could be shaped into a documentary. The BBC probably had an entirely different conception of the documentary at that point in time!

‘Two Voyages’ is also effective in establishing the inherent contradictions between Crowhurst’s bright and breezy tape recordings and cine-cam footage, and the mental turmoil he was experiencing even as he continued to play the part that was expected of him. Had the documentary taken this schism as its starting point and really squared up to Crowhurst’s mental breakdown, it might have emerged as the definitive entry in the Crowhurst cycle. As it is, it’s the first piece of work that gives us Donald Crowhurst as a regular guy – right down to some audio of him blowing a melancholy tune on the mouth organ – with whom it’s all too easy to sympathise. But it only establishes that one aspect of Crowhurst, and does not (or cannot) get a fix on the Donald Crowhurst of those last weeks.

For a documentary that plays up duality in its very title, its inability to reconcile Crowhurst’s (perhaps self-created) public persona with the person he became as time wore on and his options ran out is bitterly ironic.
Posted by Neil Fulwood at 12:09 AM