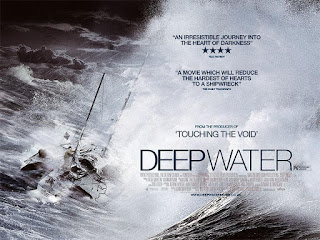 Donald Crowhurst set sail in the Teignmouth Electron in late 1968. By 1970 there had been a book that is still in print and a BBC documentary. From hereon in, there would be some form of representation as regards Crowhurst’s Golden Globe dichotomy – be it a documentary account or a fictive ruminations – across each of the six decades that separate the original Sunday Times sponsored race from the two most recent biopics: James Marsh’s ‘The Mercy’ and Simon Rumley’s ‘Crowhurst’.

But it wasn’t till 2006 – nearly forty years afterwards – that film-makers Louise Osmond and Jerry Rothwell came as close as anyone has thus far to making the definitive film on Donald Crowhurst and the Golden Globe race. ‘Deep Water’ is a clear-sighted and narratively lucid distillation of all the key elements. It establishes Crowhurst’s background and throws into sharp relief how lacking he was in seafaring experience compared to the other entrants. It demonstrates a psychologically acute yet sympathetic understanding of his personality – by turns ebullient, confident, persuasive, driven and, underlying all of it, self-delusional in the way that those beset by failure (or by the nagging conviction that they have not achieved all of which they are capable) can delude themselves that success or fame or whatever their motivator is, is just round the corner – and it correctly identifies him as a tragic victim rather than a villain or, worse, simply a cheat.

As an example of feature-length documentary filmmaking, it gets everything right. The balance of ‘talking heads’, voiceover and archive footage is spot on, and the transitions organic and effective. Tilda Swinton’s narration is perfectly pitched, her diction precise, and there is no slipping into melodrama. Osmond and Rothwell plot out the timeline, the course by which the circumnavigation was effected (if only by one contestant and sort-of-and-then-some by another), and the stages of the voyage as applicable to the various entrants.

Better still, it doesn’t just focus on Crowhurst, but tells his story through the greater context of the race itself. Through the yachtman’s own interview contributions, ‘Deep Water’ celebrates Robin Knox-Johnston’s success (he comes across as immensely likeable) and his generosity – he donated his winnings to the financially beleaguered Clare Crowhurst and her children. The filmmakers also evince a fascination with Bernard Moitessier, a man who had already undertaken – and published books about – various nautical adventures. The calm, steady professionalism of Knox-Johnston and the round-the-world-yacht-trip-as-zen-experience of Moitessier are the counterpoints by which Crowhurst’s story can be told that much more empathetically.

(It’s understandable that other contestants get short shrift – ‘Deep Water’ is essentially telling one story, not nine, and Knox-Johnston and Moitessier occupy a place in its narrative for specific reasons – but it’s to be regretted that, say, Bill King’s near-death experience when his boat capsized or Nigel Tetley’s dramatic eleventh hour disaster don’t merit more screen time.)

One gets the impression that Moitessier – represented by readings from his books and some splendidly philosophical interview footage with his wife Françoise – would have been the focus of ‘Deep Water’ had Crowhurst’s bizarre, enigmatic and wholly tragic story not stolen everyone’s thunder by exerting its a grip on the popular imagination that shows no signs of loosening. Moitessier, in a boat constructed from boilerplate that he named Joshua (after Joshua Slocum, author of the seminal ‘Sailing Alone Around the World’), was odds-on to win both the Golden Globe and the prize for fastest time. Had he completed the circumnavigation according to the rules of the race (and there is nothing to suggest he wouldn’t have pulled off this double whammy), Knox-Johnston would have been a footnote in yachting lore and it is possible that even Crowhurst’s infamy would have been overshadowed.

But Moistessier was a very different individual to the others. While Knox-Johnston, King, Tetley and Chay Blyth certainly benefited from the disciplined mindset of naval service and an intimacy with hardship and physical endurance, it is clear from even the most cursory background reading on the Golden Globe and one or two filmed documentaries that they were still plagued by loneliness and heartsore at being separate from their families. Moitessier, however, was liberated by these things. At one point in his voyage, with Joshua performing well but Moitessier convinced it could go faster – could veritably fly across the oceans – he jettisoned everything that he felt was superfluous – and it’s not hard to look beyond the act as a coaxing from the vessel of more speed and see it as almost purely philosophical.

Bernard Moitessier found, in the element forces of the sea and the absolutely absence of (a) his fellow men and (b) everything that wasn’t utterly necessary, a state that most zen masters would weep at never having quite achieved. And having found this state of being, Moistessier knew that he couldn’t coast into the harbour he’d set sail from to the glare of a thousand flashbulbs, the rifle-like barrels of camera lenses, the endless intrusive questions from the press, the mobbings, the publicity, the screaming hordes. So he dropped out of the race in the most spectacular and iconic way imaginable: he omitted to cross the finish line and sailed round the world all over again.

To reiterate: Knox-Johnston’s typically British victory (a literal case of slow and steady wins the race) makes for a wonderful comparison with Moitessier’s insouciance of throwing the race by coming within a whisker of winning it – think Smith in ‘The Loneliness of the Long-Distance Runner’ only in a yacht and without even the ulterior motive of wanting to cock a snook at the governor – but ultimately ‘Deep Water’ has Donald Crowhurst as its protagonist, and fascinating as its digressions are, everything ultimately comes back to his fateful decision, the role of chance in robbing him of the tail-end-Charlie placement that might just have allowed his gamble to pay off, and the terrible effect on his mental health.

‘Deep Water’ doesn’t call it in terms of whether his disappearance was a purposeful act of suicide or as a result of being swept overboard while the balance of his mind was disturbed. Quotes from his final log book entries – a sort of de-manufacture and reconstruction of elements of Einstein’s ‘Relativity, the Special and General Theory’ (Crowhurst had taken the tome with him for, ahem, light reading) – heavily suggest the latter, but ultimately no-one will ever know, and kudos to Osmond and Rothwell for discharging their responsibilities as documentarists and refusing to fall into the trap of speculation.
Posted by Neil Fulwood at 9:35 PM