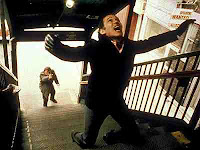 I’ve been laid up with a nasty case of the man ’flu (is there any other kind? can the man ’flu by its own definition ever be anything other than all-out life threatening?) for the last couple of days. Activity-wise, the pleasures of the cinema, the pub and my favourite Italian restaurant are out of the picture, so I’ve mainly been watching DVDs and surfing the net.

It was during the latter activity that I came across the latest in Jeremy’s Images from my all-time favourite films series on Moon in the Gutter: ‘The French Connection’. Out came the DVD and 100 minutes of classic cinema ensued. Thanks, Jeremy.

The film’s genesis was a non-fiction book by Robin Moore which detailed the efforts of New York narcotics cops Eddie Egan and Sonny Grosso to seize and nail the prime movers behind a shipment of heroine from France to the USA. They began by surveilling a known crim, the spectacularly named Pasquale Fuca, on little more than gut instinct. The trail led to French drug lord Jean Jehan, who was assisted in his innovative import scheme by TV celebrity Jacques Angelvin.

I’ve not read the book and I have only the most cursory knowledge of the real life case. I have, however, seen the film – the first of William Friedkin’s two bona fide masterpieces – more times than I can count and it was still as immediate and uncompromising and dynamic when I watched it yesterday as it was the first time I saw it – as it was, I imagine, when it first hit cinema screens in 1971.

I probably don’t need to rehash any of the plot. I probably don’t need to issue a spoiler warning when I talk about my favourite scene. I seriously doubt that a litany of classic moments is necessary (just check out the sequence of images on Moon in the Gutter – if they don’t make you immediately want to rewatch it, you might want to take a cardiogram just to check you’re not clinically dead). But screw it, for the record:

Doyle, dressed in a Santa suit, punching the hell out of a suspect. “Do you pick your feet in Poughkeepsie? … You son of a bitch, you sat on the edge of the bed, you put your finger between your toes and you picked your feet.” Surely the greatest non-sequitur in the history of cinema.

Russo doing a B&E on Doyle’s apartment after Doyle’s last night’s pick-up leaves him restrained to the bed with his own cuffs.

Doyle and Russo shaking down a bar, cheerfully abusing the customers and punching out an informer just to protect his cover.

Doyle and Russo freezing their extremities off during a surveillance, scarfing junk food and chugging foul coffee while Charnier and an associate spin out a three-course meal at a luxurious restaurant.

Doyle almost coming to blows with the Federal Agent, Mulderig (Bill Hickman), who’s been seconded to the case. Mulderig has a low opinion of Doyle, holding him responsible for the death of a colleague in an earlier, botched operation. And where do they go at each other like men possessed? In front of the Chief, at the site of fatal traffic accident. Subtle!

Doyle tailing Charnier to the subway where the cunning European successfully evades him. Doyle hurls his trademark pork pie hat to the ground with such vehemence that the hatband bounces off.

Doyle taking an assassination attempt by Charnier’s hired gun very personally. Commandeered car / L-train / 80mph chase in downtown traffic. ’Nuff said. The best car chase in the movies. Ever. So says I and anyone who disagrees is welcome to accompany Doyle and Russo down the station and talk about it there.

Doyle haranguing a police mechanic when a suspected car is stripped to pieces. “I’m had everything off but the rocker panels,” the old-timer protests. “Aw, come on, Irv, what’s that?” Cut to: an air chisel slicing through the rockers. Guess where the stash is?

And then there’s that brilliantly, unforgettably cynical ending. As Charnier escapes (oh sorry: this is the plot spoilers bit, btw; so was the paragraph above, actually), leaving the rest of the conspirators, French and American, to take the rap, Doyle plunders about vengefully in a deserted factory. Russo joins him and almost gets shot for his pains. Then Doyle sees a figure in a doorway and empties his gun. It’s Mulderig: dead. Russo is shocked. Doyle barely registers what’s happened. “Frog One’s here and I’m going nail him,” he declares. He goes sprinting into another part of the factory. A single shot rings out. The screen goes black.

Damn near every frame of ‘The French Connection’ gives you a memorable image, a quotable line or some banter that zings (Hackman and Scheider play off each other effortlessly and with perfect timing); but it’s the ending I remember above all. It’s so chillingly ambiguous. Leaves just enough open.

Then, of course, they made a sequel. But that’s another story.
Posted by Neil Fulwood at 12:14 PM