PERSONAL FAVES: From Dusk Till Dawn 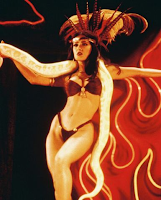 There’s a scene in Alfonso Cuaròn’s ‘Y Tu Mamá También’ – a masterly paeon to homo-eroticism, political incorrectness and the older woman – in which the horny teenage protagonists, left to their own devices after their girlfriends jet off on an exchange holiday, pass the time by engaging in some wholesome outdoor activity. Such as lying on the diving boards of a deserted country club swimming pool, eyes closed, hands in their trousers, vigorously polishing the lighthouse as they fantasise about their favourite actresses. One of them invokes the name of that Mexican goddess in human form, Salma Hayek, and both are spurred on to greater feats of onanism.

I’m willing to bet the gentlemen in question were thinking of the snake dance scene in ‘From Dusk Till Dawn’.

Sorry. I was eager to cut to the chase there. I’ll try to make amends by at least pretending to write a proper, considered article on the film. The key scene in ‘From Dusk Till Dawn’ occurs exactly at the halfway mark. Thus far, script and direction have kept audience sensibilities firmly within an immediately recognisable genre – the crime thriller. There has been shooting, explosions, hostage taking, kidnapping, the evasion of authorities and a tense border crossing. Then the protagonists – brothers in crime Seth and Ritchie (George Clooney and Quentin Tarantino), and hostage family Jacob (Harvey Keitel), Kate (Juliette Lewis) and Scott (Ernest Liu) – make an ill-advised stop at a lawless roadhouse.

It’s here that a Tex-Mex band are laying down some sleazy tunes while topless go-go dancers gyrate. (Last night I was writing about ‘The Insider’ and musing that “Mann conjures images that are haunting, sometimes surreal … and effortlessly poetic”; twenty-four hours down the line as it’s topless go-go dancers gyrating. God, I love blogging!) The lights go down, a hush falls over the rough-neck crowd. The leader of the mariachis announces the next act: the cryptically named Santanico Pandemonium. It’s Salma time!

Oh shit, I was trying to keep this reasonably intelligent. I was going to compare the scene to Rita Hayworth’s vampish burlesque number in ‘Gilda’ and Michelle Pfeiffer’s seductive rendition of “Makin’ Whoopee” in ‘The Fabulous Baker Boys’. I was going to highlight how the narrative is put on hold so the female protagonist can (literally) take centre stage, the piffling concerns of plot and dialogue held in stasis; subjugated to the heroine’s sensual self-expression. I was going to expand on this point and write about the destructive force of the uninhibited sexuality on display – how both ‘Gilda’ and ‘The Fabulous Baker Boys’ progress from these sequences into examinations of jealousy and fractured relationships. I was going to wind up this scholarly digression by demonstrating how ‘From Dusk Till Dawn’ takes things one step further: not only does the smouldering sexuality of Santanico’s dance herald destruction and filial separation (I was going to slip in a clever little parenthetical reference to the Baker boys being brothers as well), it also sends the film spinning off into a completely different narrative and a completely different genre as Santanico morphs into a vampire and one of the sexiest women ever to grace the big screen suddenly turns into something very fucking freaky.

But then I thought, why bother? Film is not analysis it is the agitation of the mind. And ‘From Dusk Till Dawn’ doesn’t invite analysis; it invites some mates round and lays on a pizza and a six-pack. It’s a B-movie to the nines and that’s how it should be enjoyed. It’s got gorgeous George being a badass. It’s got Harvey Keitel as a preacher who turns into a vampire-killing “mean mmmm-mmmm servant of God”. It’s got FX meister Tom Savini as a character called Sex Machine who’s got a six-shooter in a codpiece! It’s got Fred Williamson growling “I was in ’Nam.” It’s one hundred minutes of balls to the wall sick twisted fun, all wrapped up in a kick-ass soundtrack.

And it’s got Salma Hayek. Doing a snake dance.

(I may be sleeping on the couch tonight.)
Posted by Neil Fulwood at 12:57 PM