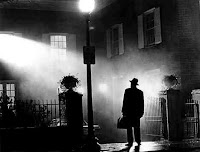 A couple of years ago I picked up the ‘Exorcist Anthology’ box set, dirt cheap: all five films, indifferently packaged. A raft of special features bulking out the original, directors’ commentaries on ‘Exorcist: The Beginning’ and ‘Dominion: Prequel to The Exorcist’ and sod all apart from trailers on ‘Exorcist II: The Heretic’ and ‘The Exorcist III’.

Beyond watching the original for my write-up last Halloween, the box set sat on the shelf gathering dust. A week ago, I blew the dust off it and sat down for an ‘Exorcist’-fest. The power of Christ knows what compelled me.

William Friedkin’s ‘The Exorcist’ is visceral, cerebral and still controversial, one of the key American studio films of the ’70s – a stand-out in a decade littered with great American movies. It would be all-too-easy (and lazy) to describe the other titles as a mixed bag, beset by script and production problems. Not to mention unfair, since Friedkin’s film wasn’t exactly plain sailing in its production. Just like William Peter Blatty’s novel was essentially a compromise from his original concept of the material.

In fact, the entire ‘Exorcist’ saga is shadowed by controversy, compromise, meddling and ill-fortune.

Over the next few days I’ll be looking at each film in turn, tracing the story from the genesis of William Peter Blatty’s groundbreaking novel (it has its roots in an actual case in 1949) to production company Morgan Creek’s rejection of Paul Schrader’s prequel and astonishing decision to remake it entirely under the less-than-guiding hand of Renny Harlin in 2004.
Posted by Neil Fulwood at 11:48 PM