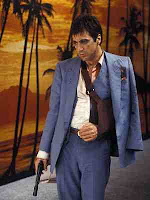 An oft-repeated criticism of 'Scarface' is its portrayal of Cubans. Which is kind of laughable given the American government's attitude towards Cuba. I don't really think there's much American film-makers can do to compound the insult. Nonetheless, it's an easy criticism to understand. Opening with a news footage montage showing the boat people arriving in the US, title cards inform us that of the quarter of a million refugees who left Cuba in 1980, an estimated 25,000 had criminal records.

SCARFACE plays quite a bit on cable TV here so I've watched it in bits and pieces a few times in the past month and it still captivates me. It is such a vulgar, materialistic film - intentionally so, I believe - but also an incredibly engrossing one. It really is a fascinating snapshot of the times, a time capsule of Miami in the 1980s.

Have you ever played the video game? It is basically a sequel that posits, what if Tony survived the shoot-out at the end? The guy they got to do Pacino's voice is quite good and it's fun to run around as Tony blowing away things and stealing drugs all to the film's soundtrack.

Funny you should mention the game, my wife bought it me for a birthday present in April. Work, blogging and a million other things have prevented me from playing it yet, but I think I might give it a go now. You'll know when I get into it - productivity on the blog will drop to one article a month!

"You'll know when I get into it - productivity on the blog will drop to one article a month!"

Heh, yeah, I know the feeling. I'm resisting getting the GHOSTBUSTERS video game for that very same reason.

I've watched Scarface more recently than Carlito's Way so it's sharper in my memory.

I loved the scene in the restaurant you mentioned. I think it really showed not only how Tony was losing it, but also how both he and Michelle Pfieffer's character had such sad, empty lives.

And you mentioned his sister Gina: what about Tony's crazy insistence that she wasn't allowed to date or go out (did he want to shut her up in a nunnery?). And that at the very end, when he's out of his mind on drugs I guess, his obsession with Gina crosses the line and become physical.

My only big complaint are all the bad Hispanic accents (how about when he's talking to Sosa in South America, why aren't they speaking to each other in Spanish?), but it's still a good, memorable movie.

As a cuban I can tell you that this movie teaches ignorance to the already ignorant especially about anything Cuban. If you really want the real story on Miami Cubans watchclips or even episodes of Que Pasa Usa on the web, YouTube, or Netflix. It actually stars one of Al Pacino' costars in the movie but here his character is more authentic to Miami Cubanism which is actually very middle class unlike the Macho thug fantasy of tbis movie that to me has succeeded in spreading ignorance about the Miami Cuban community. I know that well traveled people know better but I'm thinking about a kid in Iowa whose never off the farm or a kid in East L A who doesn't know anything outside of the barrio.