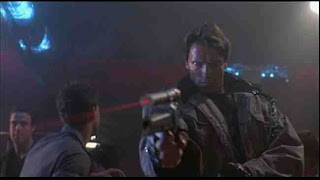 I’m not into hagiography and it rankles when people try to deny their roots, but I’d love to discount ‘Piranha II: The Spawning’ and hail ‘The Terminator’ as one of the great debuts in modern mainstream cinema. It would almost be effortless to make the case: ‘Piranha II’ as a throwaway piece of hackwork (not even graced by the sly wit of a John Sayles script a la its predecessor) that Cameron seized upon purely because it gave him the chance to direct something.

Still, ‘Piranha II’ remains his directorial debut; and as Joe Dante used the first ‘Piranha’ as a stepping stone to ‘The Howling’ (the first authentically Joe Dante film), so Cameron used his fishy opus as a springboard to ‘The Terminator’. I mention this simply to illustrate what an achievement ‘The Terminator’ was, and how out-of-nowhere its success. (It’s worth bearing in mind, as well, that Arnie wasn’t a major star at the time; he’d got the ‘Conan’ films under his belt, but ‘Raw Deal’, ‘Predator’ and ‘The Running Man’ were still two or three years off.)

‘The Terminator’ can also be ranked as a hell of an achievement in terms of the amount of bang Cameron got for his budget. It cost $6.5million. Two years later Cameron’s next film, ‘Aliens’, clocked in at three times that much. Another three years and ‘The Abyss’ came with a price tag of $70million. In 1991, seven years after part one cleaned up at the box office, Cameron delivered ‘Terminator 2: Judgement Day’ at a cost to the studio of over $100million. They made it back and then some, which is why Cameron secured a $110million budget for ‘True Lies’ in 1994, $200million for ‘Titanic’ (1997) and $237million for last year’s ‘Avatar’. And with ‘Titanic’ taking over a billion and ‘Avatar’ twice that, there’s every possibility that his budgets will continue to be as bloated as his film’s running times.

Again, just for comparison, let me quickly rattle through them. ‘The Terminator’: 108 minutes. ‘Aliens’: 137 minutes. ‘The Abyss’: 146 minutes. ‘Terminator 2: Judgement Day’: 139 minutes. ‘True Lies’: 141 minutes. ‘Titanic’: 194 minutes. ‘Avatar’: 162 minutes. Which adds up to an average running time of two hours twenty six minutes. And as much as I love some of Cameron’s films and despair at others, there is nothing in his filmography that would not benefit from a more stringent approach in the editing suite.

Except for ‘The Terminator’. 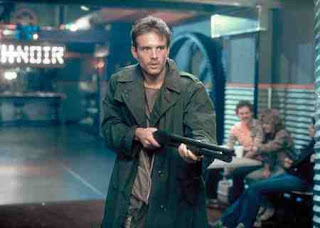 ‘The Terminator’ is a powerhouse action/sci-fi thriller, a textbook example of the chase movie, and a model of narrative economy. Everything about it hums with purpose, from the gritty urban look of the cinematography to the relentless cadences of Brad Fiedel’s score. In a comment he left on my introduction to Terminator week yesterday, Bryce of ‘Things That Don’t Suck’ remarked that “Cameron was able to take what was basically a Corman budget and turn it into something that blows my mind each time I watch it. That movie’s pure editing.” Amen, brother. Every cut, every choice of camera angle, every line of dialogue, every set-piece (and ‘The Terminator’ is littered with set-pieces, more so than many movies with ten times its budget) pushes the narrative forward, raises the stakes, heightens the danger, and plunges protagonists Kyle Reese (Michael Biehn) and Sarah Connor (Linda Hamilton) headlong towards their inevitable showdown with cybernetic killing machine the T-101 (Arnold Schwarzenegger).
It’s Arnie who gets the iconography and the signature line “I’ll be back” (three words out of the grand total of the 130 or so he gets in the entire hour and three quarters), but for me it’s Michael Biehn who solidifies the movie. His performance captures the underlying melancholy in Reese’s grim determination: Reese is a soldier, on a suicide mission, and he knows it from the outset. Inevitability haunts him, but he never gives up. In his own way, he’s as relentless as the T-101; as unswervable from his mission. 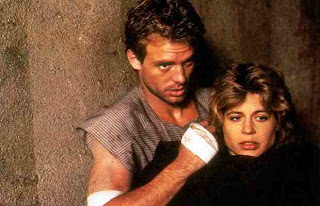 Linda Hamilton credibly effects Sarah Connor’s narrative arc from harassed waitress to bona fide action heroine, although the world would have to wait until ‘Terminator 2: Judgement Day’ for the full adrenaline-pumped awesomeness of her transformation into hard-bitten, hard-as-nails survivalist. Elsewhere, ‘The Terminator’ serves as a casting call for ‘Aliens’ with Biehn and Bill Paxton making their first appearances in a James Cameron film and Lance Henriksen his second (after ‘Pirahna II’).
Ultimately, ‘The Terminator’ is as beautifully simple in its construct as it is darkly evocative in its vision of a dystopian future literally under siege from technology. Matters pertaining to Cyberdine and Skynet are kept to a minimum. It was with the arguably overblown sequel that the mythos of the series came to the fore. Here, the emphasis is kept rigidly on Kyle Reese, Sarah Connor and there remorseless, emotionless and implacable enemy. Cameron never forgets that the film is about the chase. And even when the conflict is over, a perfectly pitched coda carries the sting of a future still under threat.

Bryce Wilson said...
This comment has been removed by the author.
9:20 PM

Thanks for a shout out. You really hit the nail on the head (aside from the fact that Piranha is totally a Joe Dante film). Interesting point on Cameron's runtimes, I almost forgot the man ever made short films.

Though part of me would be perversely thrilled if Cameron made a five hour and fifty six minute film that cost the GNP of several nations.

Thanks for the comment, Bryce. Yeah, I did kind of hammer Joe Dante's achievements on 'Piranha' for the sake of making a comparison, didn't I? You're right to state the case for Dante.

A Jim Cameron "five hour and fifty six minute film that costs the GNP of several nations". That would, in a completely fucked up way, be the very definition of awesome. Cameron's excesses harnessed to a Bela Tarr-style running time and a budget that would bankrupt a country let alone a studio.

I also see Terminator as Camerons TRUE starting point as a director, its where he truly showed what he could do with a movie. His work on films like Piranha II and Battle Beyond the Stars (on the fx dept.) were his way of getting his foot in the door.

I see Terminator as a horror film, a monster movie in the strictest sense of the word. After all, what is The Terminator if not a movie about a girl running from a monster! This is evident in the last scenes, when the robotic endoskeleton emerges from the rubble of the truck...awesome sequence!

And to think that O.J. Simpson almost ended up being The Terminator!!

The OJ simpson Terminator could have been remarkably prescient, particularly if he'd used a knife and then led several dozen police cars in a live-on-air chase.