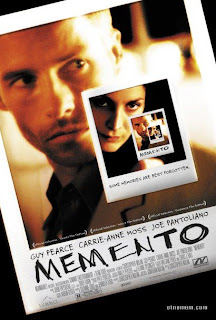 ‘Memento’ is a feature-length extrapolation of a 5,000 word story (‘Memento Mori’) by the director’s brother, Jonathan. The film adheres to basic premise of the short story – a man with short term memory loss tries to track down the man who raped and murdered his wife – and makes brilliant use of its key imagery: post-it notes, snapshots, tattoos, anonymous rooms. In the film, anti-hero Leonard (Guy Pearce) moves between a series of cheap motel rooms. The story mires him in the antiseptic confines of a hospital room. He’s called Earl in the story.

‘Memento Mori’ is structured so that it unfolds as a dialogue between Earl and his subconscious, his need for revenge/closure fighting its way through the vacuum that his memory has become. Every ten minutes – half an hour at the most – he’s back to a cognitive ground zero. He relies on prompts: lists, reminders, pictures. The post-it notes are handy. Over time, he’s built up a file; worked towards identifying the perpetrator. This kind of information needs more than post-it notes. He has himself tattooed. He’s called Earl in the story. There’s no Sammy Jankis.

‘Memento’ sets itself a difficult task. Cinema is above all a visual medium. The story is entirely internalised. The stages by which Earl arrives at an identification of his wife’s murderer are just so many blind spots. The settling of accounts at the conclusion is presented as the punchline to an elaborately established and cruelly ironic joke. At ten pages, it’s a small jewel of deliciously deceptive storytelling: it’s a character study whose protagonist is characterless; a revenge thriller stripped of thrilleramics or catharsis; a short story with sod all in the way of story.

‘Memento Mori’ has no Sammy Jankis. It has no Teddy Gemmell, either. There’s a tattooist in one brief scene, and a man lying dead on the pavement at the end. It’s fair to say that Earl is the only character; the story takes place in the blank spaces of his mind. Its tone and structure probe Earl, dispassionately and at one remove, like a lab specimen. He’s called Leonard in the film. Sammy Jankis (Stephen Toblowsky) is an alter ego of sorts, a man whose condition parallels his own; a man who, like Leonard, loses somebody close to him. Sammy is a constant reminder to Leonard. A reminder of who he is and why he is. A reminder, also, of guilt. Teddy Gemmell (Joe Pantoliano) is just as inextricably a part of Leonard. In the pas-de-deux of protagonist and antagonist, Leonard and Teddy share the same co-dependency (a constant theme in Nolan’s work which Bryce has highlighted during this blogathon) as cop and killer in ‘Insomnia’, Angier and Borden in ‘The Prestige’, Batman and The Joker in ‘The Dark Knight’.

‘Memento’ has Sammy and Teddy because otherwise Leonard would have no life, no persona, no point of identification or empathy audience-wise. Without Sammy and Teddy, Leonard would be a black hole into which everything would disappear, from Wally Pfister’s washed-out and atmospheric cinematography to the structural legerdemain of Christopher Nolan’s script. There would be no emotional charge to Leonard’s dalliance with a hooker (nothing sexual involved; he just wants to wake up to a few seconds’ false hope) or the scene where he burns some of his wife’s possessions (in coolly cynical voiceover he muses “I must have burned truckloads of this stuff”; a horrible admission that the act is purely symbolic and he’s no closer to acceptance, still unable to move on).

‘Memento Mori’ keeps its narrative beats offstage; likewise the genre tropes. Earl has a file on the killer; that’s all Jonathan Nolan really tells us. The film has neo noir written all over it. Drug dealers, duplicitous dames, questionable cops, guys with guns. Clues and connections. A join-the-dots hard-boiled narrative. In reverse. It’s like T.S. Eliot, having penned “in my beginning is my end”, thought fuck it and abandoned the ‘Four Quartets’ to write crime thriller. Jonathan Nolan’s story uses the cadences and careful repetitions of poetry to get into Earl’s head and describe the empty spaces and strange half-echoes of lost memories. He’s called Leonard in the film.

‘Memento’ is a feature-length extrapolation of a 5,000 word story by the director’s brother. In its end is its beginning.