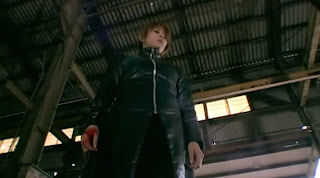 A note on the title: both IMDb and the subtitles on the print I watched have it as ‘Hard Revenge, Milly’; likewise the indigenous title (‘Hâdo ribenji, Mirî’) retains the comma. Which makes it sound like a comment, addressed to the eponymous Milly, regarding the nature of hard revenge. Rendering it, however, as ‘Hard Revenge Milly’ attributes the vengeful business to the protagonist – which makes a lot more sense to me. After all, you wouldn’t refer to Big Bad John as “Big Bad, John”, would you?

So: ‘Hard Revenge Milly’. At just 44 minutes (or 38 if you skip the credits, which I wouldn’t advise as there’s a Marvel-stylee post-credits coda which pretty much sets up the sequel), writer/director Takanori Tsujimoto’s gleefully excessive feature sometimes feels like a fleshed-out showreel and sometimes like the second half of a feature twice the length.

Here’s the plot: Milly (Miki Mizuno) reminisces, while driving to a run-down bar, about the weekend drives she took with her family two years ago. There’s a flash-forward where she cuts a guy in half with a sword and she muses that things are different now. The girl has a talent for understatement! At the bar, Milly speaks with former sword-maker Jubei* (shades of ‘Kill Bill Vol 1’ here) and gets kitted out. 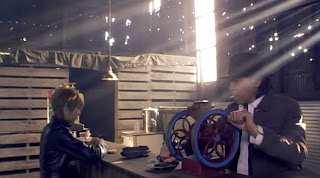 Then she visits the gentleman we met in the flash-forward. We don’t get to make his acquaintance for much longer this time around.

Turns out he’s part of a gang, led by the loathsome Jack Brothers (insert ~ off, ~ shit, or I’m all right ~ fuck you gag here), responsible for murdering Milly’s family. (Flashbacks provide the gory details. And I do mean gory. There’s even a moment of baby conflagration that, notwithstanding the venal filth I’ve waded through during two years of Winter of Discontent, comes across as just a tad unnecessary.) Milly snaps a pic of the dismembered corpse, sends it to the Jack Brothers, waits for their arrival and protracted gunplay, swordplay, hand-to-hand combat and improper use of a teddy bear ensues.

Seriously: keep an eye on that teddy bear. 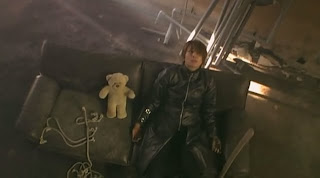 As a revenge thriller, ‘Hard Revenge Milly’ contains absolutely nothing it doesn’t need to. Even the motive behind the Jack Brothers’ attack on Milly’s family is immaterial (“they were just there when we wanted to kill someone”). There’s almost a purity to it: someone gets fucked over; they dole out a brutal fucking over in return. Job done. End of.

While considerably less silly than, say, ‘Machine Girl’ (Tsujimoto maintains, for the most part, a grimy, punkish aesthetic and makes good use of some post-industrial locations), it’s still as OTT in the blood-letting department and boasts some slapstick (if grotesque) moments, such as Milly impaling a corpse through the head to make him sit up, and one of the Jack Brothers taking a pratfall as he trips over a severed head. Or the perplexed manner in which a gang boss examines the conflagrant remains of a henchman. 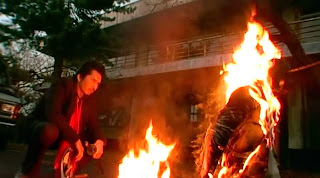 The payoff to all this viscera requires an effect that is obviously beyond the production’s budget, hence its depiction as a piece of shadow-play. However, this last-minute revelation of Milly’s capabilities is less likely to leave you in a state of open-mouthed OMG-ness than make you wonder why she didn’t use it earlier and save herself a lot of pain during the climatic smackdown. Speaking of which, the over-foleyed thwack sounds do very little to disguise the fact that the combatants’ fists and bodies are demonstrably several feet apart during much of the shoddily edited hand-to-hand.

But this kind of thing exists in its own filmic universe and serves purely as a delivery system for tough chick iconography and massive gouts of blood. Mizuno fits the bill and then some as regards the former (in fact she’s second only to Christina Lindberg in ‘Thriller – A Cruel Picture’ when it comes to looking kick-ass and full-on vengeful in a floor length leather coat) and the amount of times gouts of blood spatter the camera lens is a testament to the latter.

Right, then. Off to watch the sequel!

*Apart from the leading lady, don’t ask me for any of the cast’s names. The closing credits were in Japanese and IMDb doesn’t marry up the actors to their characters.
Posted by Neil Fulwood at 7:54 PM