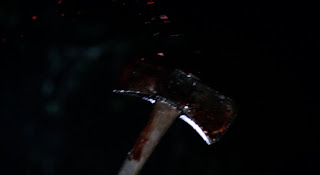 I refer, of course, to the marketing of the film. (Of the film itself … well, all in due course.) “Old school American horror” snarls the DVD sleeve, following up this assertion with “it’s not a remake, it’s not a sequel and it’s not based on a Japanese” – a not particularly literate but certainly effective stiff middle finger to a decade or more’s worth of mainstream genre flicks.

Effective, that is, until you look at the two statements in a little more detail. “Old school American horror” suggests traditionalism: recognizable tropes, characters and imagery; whereas “it’s not a remake, it’s not a sequel and it’s not based on a Japanese” implies originality. Already there’s something of a dichotomy going on.

I’m going to make an assumption that writer/director Adam Green was intending to make a throwback to 70s/80s slasher flicks, on an appropriately low budget. The opening credits, set during Mardi Gras, demonstrate a fratboy aesthetic (beer, boobs and boorishness) unapologetically in tune with a less reconstructed time. While this kind of thing isn’t necessarily a negative, certainly for a horror film (the genre isn’t meant to be PC), there’s a kind of desperation to the way Green stages it. We’re not far off the tedious for-the-camera cavortings of a Girls Gone Wild video here.

The tits-out-but-no-actual-sex business continues as we’re introduced to our protagonists, two of whom – Misty (Mercedes McNab*) and Jenna (Joleigh Fioravanti) – are participating in just that kind of video under the direction of sleazoid Doug (Joel Murray**). 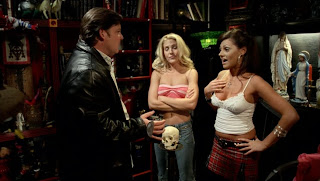 The rest of the gang comprise such finely drawn characters ciphers as Ben the dweeb (Joel David Moore), Marcus the cool kid (Deon Richmond), Marybeth the tough chick (Tamara Feldman) and Jim and Shannon the old couple (Richard Riehle and Patrika Darbo), all of whom set out for a bayou ghost cruise under the woefully incompetent stewardship of tour guide Shawn (Parry Shen).

En route through the murky, misty and atmospheric swamp (or at least it would be if Will Barratt’s cinematography wasn’t so flat and uninteresting), Marybeth recounts – as a corrective to Shawn’s half-arsed rambling – the legend of the deformed, spurned and resultingly psychotic Victor Crawley (Kane Hodder, he of Jason fame). Guess what happens next? The boat gets holed and sinks, our happy bunch find themselves stranded, and the hatchet-wielding Crawley comes raging out of the night to make mincemeat of them.

Anyone who hasn’t, by this point, identified the final girl and figured the black guy as expendable obviously hasn’t watched enough horror movies. 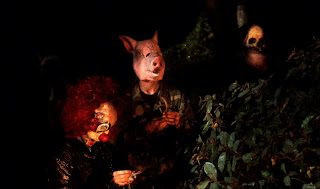 It takes Green half of his short (80 minute) running time to get to the blood and gore, but when he does he lets the broad comedy (the bitchy interplay between Misty and Jenna is cattily hilarious) take a backseat while the effects team deliver some decently visceral stuff in the face of what must have been a highly restrictive budget. There’s death by hatchet, death by shovel, death by handle of shovel, and mortal wounding by industrial sander (which, even allowing for the genre’s long-standing fascination with improperly used tools, is something I’ve not seen elsewhere). There’s also faces ripped open and limbs torn off, all of it accompanied by geysers of blood.

For all the “not based on a Japanese one” braggadocio, the OTT levels of blood-letting are entirely in keeping with the likes of ‘Machine Girl’, ‘Vampire Girl vs Frankenstein Girl’, ‘Hard Revenge Milly’ et al. The presence of horror icons Kane, Robert Englund (a pre-credits cameo as a hillybilly) and Tony Todd (memorable but utterly wasted in a nothing role) point to more homegrown influences, and every situation the gang blunder into has its provenance in another, better, movie.

With more emphasis on the humour, ‘Hatchet’ could have been a piss-taking cult classic. Stripped of its pratfalls and leering douche-bagginess (amazingly, Word hasn’t underlined douche-bagginess, therefore it must be a legitimate expression – fuck me!!!), it could have been the down ‘n’ dirty throwback it was conceived as. However, it doesn’t go all out for either of these and therefore not only falls between two stools, but rips its own entrails out in doing so.

**Bill Murray’s brother, believe it or not.

Yeah I absolutely loathed this movie.

That being said, I DO recommend you pick up the second one for Winter as Green got the tone a whooollllleee lot better.

Tony Todd gets promoted to Co-Lead and the bland Mary Beth gets replaced with Danielle Harris, so that's nice. Green tones down the nudity and ups the creativity on the gore gags. The swamp no longer makes for such a boring setting, the annoying casio score gets ditched.

It's not like it suddenly becomes a great horror film, it's still Hatchet, but it's actually decent fun to watch.

I'll put 'Hatchet II' on the shortlist for next year's Winter of Discontent. In the meantime, I'm just about to round things off for 2011 with a bit of comedy horror featuring two lovable rednecks. As you do.