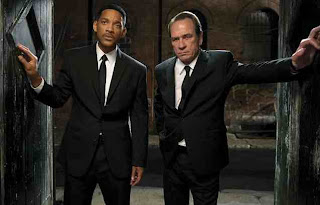 Does this one count as a Shots on the Blog review? Well, the franchise is about a couple of agents tasked with policing alien activity on earth; this latest (and belated) instalment starts with a prison break; and the plot centres around an attempt to prevent a murder. Yeah, that’s good enough for Shots inclusion.

Remember when the original ‘Men in Black’ was released in 1997? It was fun, frothy, irreverent and inventive; it boasted a who’d-a-thunk-it double act between Will Smith and Tommy Lee Jones that was quite simply a delight; and it’s hour and a half running time made for a slick blockbuster that utterly entertained and never outstayed its welcome.

The sequel appeared five years later. And it was “meh”. Five freakin’ years and they served us up an instantly forgettable piece of mediocrity. In the meantime, director Barry Sonnenfeld’s career nosedived. He’d proceeded ‘Men in Black 2’ with the misjudged ‘Wild Wild West’ and the just plain awful ‘Big Trouble’; he followed it with ‘RV: Runaway Vacation’, a film I’ve only seen ten minutes of which left me feeling profoundly despondent. Six years working in television followed.

To say I approached ‘Men in Black 3’ with trepidation is putting it mildly. To say I enjoyed it is nothing short of miraculous. 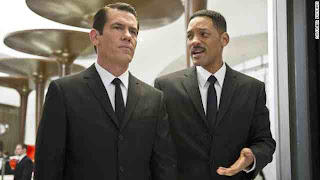 Not that the first twenty minutes or so are that promising. In short order, galactic uber-criminal Boris the Animal (Jemaine Clement) breaks out of a maximum security compound on the moon; then we’re reintroduced to Agents J (Smith) and K (Jones) ten years on from their last appearance, and several scenes of forced and un-engaging dialogue try to remind us how zippy the banter used to be. Following an okayish set-piece at a Chinese restaurant, some semblance of a plot kicks in. It turns out that Boris got sent down after being apprehended by K and he’s out for a little payback courtesy of a time-jump device, transporting himself back to the 1960s to assassinate K.

In the here and now, J suddenly finds himself bereft of his partner and perplexed as to why none of his colleagues can remember K. Then the full extent of Boris’s anarchic plans come to light and earth finds itself on the verge of defeat from an alien invasion. J travels back in time, intent on stopping Boris and under the dire warning to keep clear of K lest he create a paradox. The moment J steps into the late 60s, the film picks up no end. And when he encounters a forty-years-younger K (Josh Brolin), ‘Men in Black 3’ really hits his stride.

Brolin is the filmmaker’s secret weapon. He reverse engineers Tommy Lee Jones’s characterisation so perfectly that it’s not imitation or parody, but a damn good performance in its own right. Moreover, the chemistry between J and the younger K in this movie is reminiscent of that between J and the original K first time round. ‘Men in Black 3’ marks a return to the tone and style of the first film, and that can only be a good thing. There are some great visual jokes and nice concepts (Sixties counterculture provides an effective touchstone), the script plays fair with the time travel elements, and even if a late-in-the-game scene attempts to push the emotional buttons a bit too hamfistedly I’m prepared to turn a blind eye. It’s nice to see the MIBs back in a film that’s actually entertaining.
Posted by Neil Fulwood at 3:20 PM