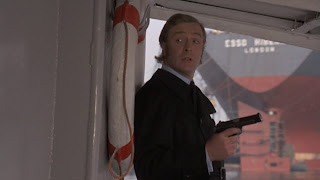 Mike Hodges’ career has had its ups and downs, but fuck me if the man didn’t make a stone cold classic first time out. ‘Get Carter’, adapted from Ted Lewis’s stark novel ‘Jack’s Return Home’, is arguably the great British crime movie. A slice of grim and unflinching northern noir, it boasts authentically gritty locations, an unapologetically amoral aesthetic, and a career-defining turn from Michael Caine.

I’ve neglected the Personal Faves project for a while. ‘Get Carter’ is a punchy and uncompromising choice to get back into the grove with.

Jack Carter (Caine) is a London-based villain whose associates aren’t too keen on the idea of him taking a sabbatical in his old stamping ground of Newcastle, but Carter’s insistent. His brother Frank has died – ostensibly in a car accident, ostensibly while drunk – and Carter’s convinced he was murdered. On the train up from London, he reads Raymond Chandler’s ‘Farewell My Lovely’, and what follows is as complex in its plotting and character interrelationships as anything by Chandler, even though Carter eschews Philip Marlowe’s laconic style for a brutally direct investigative approach.

He starts out by bracing Eric Paice (Ian Hendry), a “face” from the old days. Eric is evasive when it comes to questions about Frank, and won’t say who he’s working for now. Carter wastes no time in determining that Paice is employed as a chauffeur for gang boss Cyril Kinnear (John Osborne). He also has some probing questions for Frank’s bit on the side, Margaret (Dorothy White). Carter’s expectations that Margaret will take care of Frank’s teenage daughter Doreen (Petra Markham) – who, it is heavily intimated, might well be Jack’s daughter – are met with reluctance. 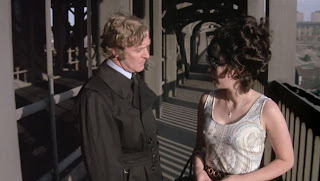 Carter’s blunderings earn him the disapprobation of the local underworld and increasing pressure is exerted on him to return to London. Meanwhile, bent property developer Cliff Brumby (Bryan Mosley) tries to coerce Carter into disposing of Kinnear in order to extricate himself from the mobster’s extortion. Aided by the booze-addled Glenda (Geraldine Moffat), sometime plaything to both Kinnear and Brumby, Carter’s search for the truth is given a nudge in an unpalatable direction by her offhanded revelation that she’s appeared in blue movies for Kinnear.

‘Get Carter’, for all its plethora of characters and complexity of narrative, is an incredibly lean movie. Its aesthetic is stripped down. The cinematography is an exercise in documentary realism. The milieu is bleak. The dialogue, though mainly sparse, offers some eminently quotable dialogue: “A pint of bitter – in a thin glass”; “Get yourself a course in karate”; “You bloody whore!”; “You’re a big man, but you’re out of shape. For me, it’s a full-time job. Now behave yourself.” All of these lines are the more memorable for their context. No spoilers, but Caine’s delivery of “I know you didn’t kill him. I know!” is just as chilling as the action that accompanies it.

Anyone even remotely familiar with the film won’t need me to tell them, particularly after the above quoted moments, how much of a bastard Jack Carter is. Caine’s interest in the role sprang from the people he’d seen, in his youth, dragged into crime as an escape from poverty, a fate that could easily have been his. He referred to Jack Carter in interviews as “the ghost of Michael Caine” and described the character as a corrective to the tendency, in British cinema, to portray gangsters as comedic or inept. As Caine pointed out in a much-quoted turn of phrase, “gangsters are neither funny nor stupid”. Carter certainly isn’t. Carter’s cold, ruthless and entirely self-serving. He uses violence without a second thought, yet the violence in the film is sudden, brief and not overused. There’d be no point in a man like Carter overdoing the violence. It’s a means to an end, as is virtually everything else in his life – nothing more. 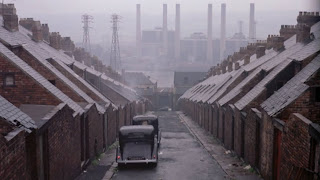 Caine’s is not the only terrific performance. Ian Hendry, struggling with alcoholism, his career marooned in TV while Caine was soaring high on the big screen, is a study in malevolent contempt as Paice; Hodges played on Hendry’s resentment to draw a performance from him that stands as a career best. Softly spoken playwright John Osborne was an offbeat choice for Kinnear, but kudos to Hodges for going with him – Osborne exudes menace, and the quieter he talks (some of his dialogue is a real strain to hear), the more threatening he seems. Tony Beckley and George Sewell – the latter British television’s hard man of choice in the 70s – deliver the goods as a couple of heavies who try to take Carter down in a dockside shoot-out. Bryan Mosley, who would go straight from ‘Get Carter’ to playing a greengrocer on soap opera ‘Coronation Street’, is suitably oleaginous as Brumby.

Passing over Britt Ekland and her nothing role as gangster’s moll Anna (quite why she gets third billing for what’s essentially a cameo is a mystery), the ladies of the cast acquit themselves just as admirably, particularly Rosemarie Dunham as Edna, the landlady whose guesthouse Carter uses as his HQ. His ejection of two hoods at gunpoint from said establishment, while naked and during a Girl Guides march-past, is one of the highlights in a film not exactly robbed of highlights.

Seriously: how many gangster movies – in fact, how many movies in general – have so many great scenes? ‘Get Carter’ boasts probably the best car chase in British cinema, at least two on-foot chases that capture the adrenaline and the breathlessness of pursuit, an act of brutal retribution at a multi-storey car park, the aforementioned gunplay on and around a ferry, a bit of business involving a sports car and the River Tyne, some nastiness at a bookie’s shop, and a blunt and unforgettable finale set against the backdrop of an aerial ropeway dumping buckets of slag out to sea. 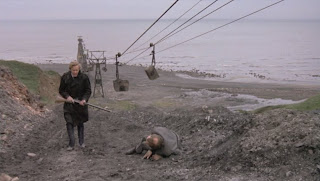 ‘Get Carter’ ends, with a sense of the inevitable, on the least glamorous beach in the history of cinema. Which is apposite since ‘Get Carter’ embraces a genre so often beholden to iconography and showy set-pieces and boils it down to its harshest, bluntest elements.
Posted by Neil Fulwood at 8:15 PM

A good review Neil. Succinct, pithy and to the point. Just like the film. And what a great film it is. Julia