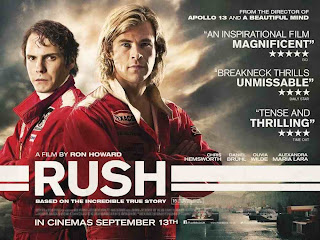 Forget the posters and the trailers that put James Hunt (Chris Hemsworth)’s tousled hair and playboy lifestyle to the forefront – Ron Howard’s ‘Rush’ arguably brings a clearer focus to its portrayal of Niki Lauda (Daniel Bruhl). Lauda is certainly the more complicated character, a man who took a shortcut into the competitive hierarchy of Formula 1 by basically buying his way in, a man who went against his family’s wishes in doing so (until he proved his dominance on the racing circuits, the name Lauda was synonymous with big business and political careerism), and a man who was basically a genius in understanding what made a car go faster and handle better. Bruhl, an actor not know for sloppy performances, does some of his absolute best work here, not only capturing the slightly shifty physicality of his subject, but brilliantly and constantly suggesting Lauda’s incessant analytical thought processes.

In some respects, Hemsworth inherits a poisoned chalice: Hunt was a maverick, a chancer, a fast-living hedonist who made his mark through a combination of louche charm and devil-may-care showmanship on the tracks. All Hemsworth has to do is flash that grin and look cool with a girl on each arm, a glass of scotch in one hand and a gram of coke in the other and that’s basically James Hunt right there. Fortunately, he’s served by a deliciously serpentine script by Peter Morgan which navigates the chicanes of some very familiar territory – Lauda’s technically brilliant craftsman eternally frustrated by the acclaim lavished on the intuitive, flamboyant and childishly irresponsible Hunt is basically the Salieri/Mozart dynamic from ‘Amadeus’ but with racing cars – and avoids for the most part the clichés of opposite-sides-of-the-same-coin and rivals-who-might-have-been-comrades.

Morgan also gifts Hemsworth with a final act that sees Hunt increasingly under pressure during the final stages of the 1976 world championship, his nerves as shredded as the wreckage of his personal relationship, guilt eating away at him for his role in swinging a vote as to whether to race in inclement weather conditions at the notoriously dangerous Nurburgring course; Lauda’s crash when mechanical problems are compounded by track conditions, resulting in a blaze that leaves him disfigured, is one of the film’s two big set-pieces (the other is the equally rain-swept Japanese Grand Prix race at the foot of Mount Fuji) and as a fully immersive visual and aural experience, it left me braced against my seat and remembering why I love cinema.

I titled this blog after Werner Herzog’s dictum that “film is not analysis, it is the agitation of the mind”. ‘Rush’ certainly agitates. In the two big race sequences, Anthony Dod Mantle’s camera records the bounce of rain off the track, the gouts of spray kicked up by the tyres, the rivulets blurring the drivers’ visors, the blurred hammering of pistons, and the very infrastructures of the cars themselves, speed and vibration in a constant battle against stability. It’s visceral and tactile stuff, ramped up by Hans Zimmer’s predictably Wagnerian score (although ‘Rush’ is one of the few films that benefits from Zimmer’s sturm-und-drang rather than being overwhelmed by it).

It’s easy to forget just how regular F1 fatalities and near-fatalities were in the 70s. Morgan and Howard make no bones about the almost suicidal risks the likes of Hunt and Lauda took. Even Lauda’s repeatedly delineated rationale that he would accept 20% risk on the track and no more (rather than Hunt’s fuck-it-live-for-the-moment 100% risk taking) sounds more like a manta than a certainty, particularly when you stop to think how much of a numbers man Lauda was. 20% is still a one-in-five chance.

Where Morgan’s script slips is the ever-so-slightly moralistic portrayal of Hunt’s drinking, partying and womanising as empty pleasures, particularly in a post-world-champion sequence that reduces his celebrity to a three-ring circus of talk shows, commercials and threesomes with air hostesses. Not that this wasn’t how Hunt rolled, but I have absolutely no doubt that, while his live-it-to-the-max attitude was self-destructive (he died of a heart attack in his mid-40s), the dude had a fucking great time. (Morgan does at least give Hunt one moment where he parries Lauda’s lecture on professionalism and clean living by asking what the point is if there’s no enjoyment.) There’s also a narratively redundant scene that indulges in the worst kind of racial stereotyping (comedy Italians as much as saying “mamma mia, it’s-a Niki Lauda and he’s-a driving my car”) that you really don’t expect from such an accomplished scripter, while female roles – albeit essayed by such capable talents as Olivia Wilde, Alexandra Maria Lara and Natalie Dormer – are functional at best.

But it’s easy to let these criticisms slide. ‘Rush’ lives up to its title and then some. It gave me the best two hours in a cinema that I’ve had in ages. Howard, a director whose work I’ve never really engaged with beyond ‘Apollo 13’ and ‘Frost/Nixon’ (another Morgan script), comes out all guns blazing on this movie, nicely capturing what I can only describe (as one who remembers it) as the drab glamour of the 70s, the life-and-death obsession of the career sportsman (it’s no coincidence that Morgan also adapted David Peace’s novel ‘The Damned United’), and finding a momentum that never falters. ‘Rush’ is as propulsive and unsubtle (in the best possible way) as the sport it depicts.
Posted by Neil Fulwood at 10:29 PM

Wow. Was not expecting to be excited for this at all, but now you've gone and piqued my interest.

depending on what you think of the film.