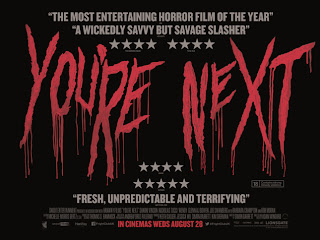 Trailered as a vicious, aggressive home invasion thriller, yet talked up by many commentators as a whipsmart horror-comedy, Adam Wingard’s ‘You’re Next’ is an awkward and frustrating piece of work that wouldn’t, in the normal scheme of things, earn an Agitation of the Mind recommendation, but scores big for one reason and one reason only.

But I’m getting ahead of myself.

Wingard, who directed the framing story in ‘V/H/S’ (look out for a review during the November/December Winter of Discontent season) is part of a loose collective of low-budget filmmakers generically known as the “mumblegore” movement. Four of the principle cast members are fellow directors: Joe Swanberg, Amy Seimetz, Margaret Laney (under the pseudonym Sarah Myers) and Ti West. There’s a scene where Swanberg, playing a prissy shit-stirring little twerp, suggests to West, playing a wannabe indie filmmaker, that he might be better off making commercials. This – and a couple of scenes that edge in wilful absurdity – is the only evidence Wingard offers that his film is in any way, shape or form a comedy.

Here’s the basic set-up, which the trailer communicates in about five seconds while the film itself takes a good quarter of an hour: retired defence contractor Paul (Rob Moran) and his perennially nervous wife Aubrey (Barbara Crampton), gather their children – smug git Drake (Swanberg), rumpled academic Crispian (A.J. Bowen), moody younger brother Felix (Nicholas Tucci), and helium voiced daddy’s girl Aimee (Seimetz) – for their 35th anniversary. Quite apart from the fact that Moran and Crampton look barely a decade older than their supposed offspring, the unfeasibility factor is ramped up by the fact that Drake, Crispian and Felix (who sound like they should be characters in an animated series about pastel coloured super-cats and their amazing adventures in the kingdom of pussies) all turn up with ridiculously attractive women on their arm: respectively, model-like Kelly (Laney), badass chick Erin (Sharni Vinson) and unsmiling vamp Zee (Wendy Glenn), while Aimee is showing off her artsy and equally unconvincing other half Tariq (West).

(That gratuitous bit of detail I threw in about Paul’s former profession: if you’re expecting a ‘Severance’-style satire, all I’ll say is don’t get your hopes up.)

Anyway, our cast of expendables sit down to the traditional family meal – they pour some nice wine, say grace, and get stuck into a big fucking argument – when three psychos in animal masks crash the par-tay and save them the hassle of killing each other by doing it for them. Tariq is the first casualty, courtesy of an arrow in the head. I can only assume this was Wingard and co.’s revenge on West for showing the rest of them up by actually making decent movies. Yeah, that’s for ‘House of the Devil’, you talented bastard!

More murder, maiming and mayhem ensues, until it becomes apparent – and this is only a spoiler if you haven’t seen the trailer or read even the most careful review – that Erin is a final girl in the way that Oliver Reed was moderately fond of the odd pint. Which brings us back to that “one reason and one reason only” caveat. Take Vinson’s performance out of the equation and ‘You’re Next’ is basically crap. As a horror-comedy it’s stultifyingly devoid of humour, be it outright comedy or genre-bending satire. As a straight-up horror, it’s massively derivative and often sloppily executed. (Horror and comedy are, after all, the two genres where you absolutely have to establish and maintain a tone throughout and time every gag or scare utterly to perfection; if either of them slip, the result is tedium.) Case in point: psychos in animal masks are scary as long as they remain anonymous under their masks, the same way that their motivations are scary as long as they’re unrevealed. So guess what Wingard and scripter Simon Barrett do? They take the masks off and establish motive. Yawn.

The script is bland, the cinematography unremarkable and the performances are generally uninspiring, with two exceptions: Moran, who is just terrible; and Vinson, who is utterly and wonderfully magnificent. “One reason and one reason only”: Sharni Vinson, who deserves to be the next big thing on this showing. She transcends a script which would have rendered Erin, never mind her resilience and capacity for righteously fucking up the collective shit of those who wish her ill, as one- or even non-dimensional as the rest of the characters if the hands of a lesser actress.

Vinson single-handedly raises the film’s game: the second half, driven by her charisma and athleticism, propels Erin into the upper echelons of the all-great final girl league tables. It’s a damned shame she wasn’t served by better writing and directing, but I’m immensely grateful to her for bootstrapping ‘You’re Next’ into the realms of watchability. Wingard owes her a “thank you” note etched in gold.
Posted by Neil Fulwood at 8:59 PM