So basically there are these two rich dudes, Master Lung (Tony Liu) and Master Tan (Kuan Tai Chen), in a small town in feudal Japan and for whatever reason there’s one hell of a pissing contest going on between them. Things come to a head when Lung and his wife (Ni Tien) – I don’t think she’s ever referred to as anything but “Lung’s wife” or “Mistress Yung” – attend a social given by Tan at which Tan announces Yen Chu (Linda Chu) as his new concubine. This pisses off Lung no end since Yen Chu is his favourite girl at the local brothel and he now considers her poisoned for accepted Tan’s favours. Quite why he feels the need to visit a whorehouse when his wife is a stone fox is something the script leaves unexplained.

The upshot is, Lung publicly insults Tan and promises to outdo him at the upcoming lantern festival. Which, in terms of mano-a-mano confrontation, is kind of like the Wild Bunch converging on General Mapache’s hacienda and informing him in no uncertain terms that his ass is theirs at the next tiddlywinks championship. Anyway, Lung decides he needs to up the ante with his lantern festival entry and goes to see drunken lantern maker Old Tsui (Ching Ho Wang). Turns out Old Tsui’s alcoholism is an impediment to lantern making and he’s subcontracting all orders to Chun Fang (Lieh Lo), a recluse who lives at a watermill on the edge of town. Curious as to why a master craftsman like Chun Fang should rely upon the shambolic Old Tsui as a frontman, Lung pays him a visit. It transpires Fang is an old adversary of Lung’s who still bears the scars Lung left on him and shuns the company of his fellow men as a result.

Chung Sun’s ‘Human Lanterns’ – a Shaw Brothers production – establishes all of this pretty quickly. Perhaps too quickly. Because you don’t need to be a student of martial arts films or a cineaste of any great acuity to guess how the narrative is going to play out, particularly when Mistress Lung, Yen Chu, and Tan’s younger sister Mei-Mei (Hsiu Chun Lin) fall victim to a kidnapper with a ghost mask and animal claws. With Lung and Tan increasingly at each other’s throats with each affront to one of their women folk, could it possibly be that someone else is playing the two sides off against the middle? No shit, Sherlock!

‘Human Lanterns’ has something of a reputation among trash fans that it doesn’t quite live up to. Not that it’s entirely a write-off, or even particularly bad. In fact, the production design is ravishing and the whole thing is shot beautifully. At its best, the lighting and camerawork have a touch of ‘Suspiria’. Plus, there’s some fun to be had with the ineffectual plodding of the district’s square-jawed authority figure Sergeant Poon (Chien Sun). According to IMDb, the character is actually called Sergeant Pan, but the subtitles on the Celestial Pictures DVD I watched refer to him as Sergeant Poon throughout. Small things amuse small minds. 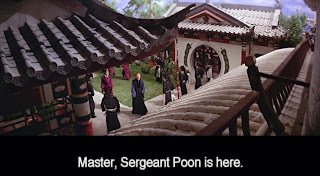 Essentially, ‘Human Lanterns’ is an attempt to fuse horror iconography with the ‘wuxia’ genre. Meaning “martial hero”, wuxia tales are historically-set and generally take a classless martial artist as their protagonist; this individual is generally bound by a strict code of honour, serves no master, and fights to redress injustice or uphold virtue. The above four paragraphs might leave you scratching your head as to whom the ‘wuxia’ is in ‘Human Lanterns’. You’re not alone, dear reader. Except for one surviving character’s last reel pledge to stop being such a self-interested douchebag (I’m paraphrasing here), no-one in ‘Human Lanterns’ demonstrates any of the noble intention or integrity usually found in wuxia.

So how does it work as a horror film? Erm, not that impressively to be honest. The ghost-animal-kidnapper-fiend is quite obviously a human antagonist in disguise from the outset. Moreover, their (easily guessable) identity is revealed very early on. That said, our villain does pursue his hidden agenda (or maybe not so hidden: a very literal case, here, of the clue being in the title) in a basement lair equipped with all manner of bubbling cauldrons and study post to which he ties his victims. Subject of which, the women in peril stuff plays out more like ‘House of Wax’ than ‘Rope and Skin’.

Ultimately, though, what ‘Human Lanterns’ stands or falls on is what any Shaw Brothers production stands or falls on: the fight scenes. And they’re pretty damn good. A stand-out is Lung’s battle with Tan’s private army, which is choreographed like a fan-dance: strangely elegant, almost camp, slightly sardonic. Various characters’ battles with the ghost-animal-kidnapper-fiend also have a touch of dark comedy, particularly in the mocking, slightly shambolic but almost always superior skillsmanship the fiend displays.

Sure, it’s predictable, often corny and I’m completely at a loss to understand its cult reputation, but ‘Human Lanterns’ is fast-paced and entertaining; an hour and a half of good unclean fun.
Posted by Neil Fulwood at 8:23 PM