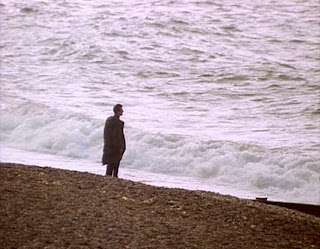 ‘Quadrophenia’, Franc Roddam’s adaptation of The Who’s blistering concept album, is perhaps the best statement cinema has given us on the nature of disappointment.

Two things are immediate even on a first viewing. The first is a matter of paradox. Roddam’s film is both utterly in keeping with the feeling and intensity of the album and confident enough to do its own thing. This extends to shuffling the musical cues as it sees fit, completely rearranging tracks. Where the album ends, as it can only end, with the howl of commingled hope and despair that is ‘Love Reign O’er Me’, the film stages Jimmy (Phil Daniels)’s götterdämmerung to ‘I’ve Had Enough’, which comes at the double LP’s halfway point. Likewise, Jimmy’s physical isolation at the end of the album – which stands as a nihilistic rejection of John Donne’s assertion that “no man is an island” – is replaced onscreen by the image of all that Jimmy holds dear, all that defines who he is and who is wants to be, hurtling down to its destruction. 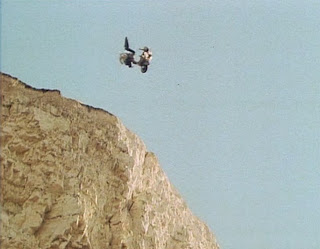 The second is how immediate, excoriating and grittily unpretentious it is. Made in 1979 and set in 1965, it’s as bolshy and uncompromising as anything that came out of America in that most magnificent of decades for cinema, the Seventies. It should have established Roddam as the UK’s answer to Scorsese yet he only went on to make only four more feature films, ranging from the underrated (‘The Lords of Discipline’) to the frankly misjudged (‘The Bride’). He proved more active in television, but here too his output varied wildly in the quality control department, with producing duties on class acts like ‘Auf Wiedersehen, Pet’ and ‘The Crow Road’ at one end and the inexplicably popular pabulum that is ‘MasterChef’ at the other.

To think of Roddam tearing it up with a British gangster film in the vein of ‘Get Carter’ or ‘The Long Good Friday’, or incisively taking a scalpel to corrupt layers of the politcal system à la Ken Loach in ‘Hidden Agenda’, is to beat yourself up with thoughts of what could have been. To watch ‘MasterChef’ is to feel ill at what actually was. Seriously: fucking ‘MasterChef’. You can imagine Jimmy and the Ace Face (Sting) and the rest of the zoot-suited mob kicking down the doors of the TV studio, swarming all over it chanting “we are the mods, we are the mods, we are, we are, we are the mods” and getting stuck into Anthony Worrall Thompson like he was a greasy fucking rocker. 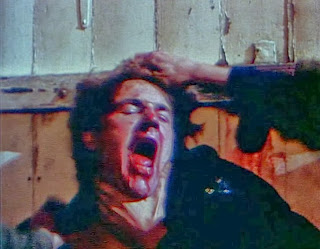 But for the sake of this review clocking in at a manageable length and not turning into a rant of epic proportions, let’s confined ourselves to 1979 and rejoice in the still classic piece of Brit-brutality that Roddam turned in on his first time out. As mentioned previously, it was less than a decade an a half since the clashes between mods and rockers at Brighton, Clacton-on-Sea and a handful of other seaside resorts made the headlines and gave staid middle-class Britain a new youth figure to fear and blame for all of societies ills, just as they had done with teddy boys in the 1950s, were doing with punks in the 1970s, would do with skinheads in the 1980s and are doing with hoodies/chavs today. The more things change, the more they stay the same.

‘Quadrophenia’ says a lot about Britain, particularly in its big set piece where Jimmy and his mates Dave (Mark Wingett), Chalky (Philip Davis) and Spider (Gary Shail) ride their mopeds to Brighton with the express intent of getting off with birds and having a fight with a rival gang of rockers. Here we have the us and them of the British class system, political divide and north-south divide writ large, with Jimmy regretfully spurning the acquaintanceship of childhood friend Kevin (Ray Winstone) as semi-adulthood has found on of them in the mod camp and the other a rocker. Here we have tribalism, organised violence and the island race mentality which come bubbling to the surface of each generation, personified either by racism, football hooliganism or both, depending on the decade. Here we have the attitude, the mindset that dictated ‘Straw Dogs’ and ‘A Clockwork Orange’ could only ever be set in England for all that they were helmed by American directors. Here we have a direct line back to Pinkie in ‘Brighton Rock’ and even further to the fog-shrouded violent streets of Victorian London; and forward through the work of Shane Meadows to the drunken belligerence in the face of cosmic destruction evinced by the protagonists of ‘The World’s End’, arguably the best big screen offering this year. 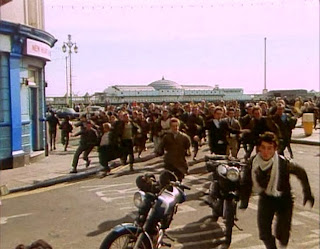 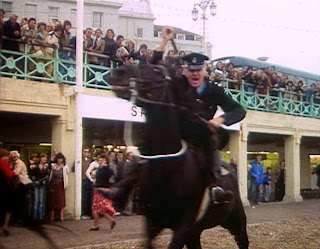 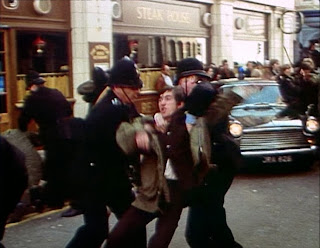 Regular readers of Agitation will know that I despair of my country on the regular basis, but also respond the most enthusiastically to films that probe these issues. ‘Quadrophenia’ is a symphony of despair. Just as Jimmy’s father (Michael Elphick) is trapped in a deadend blue collar job, Jimmy is bored and unmotivated by a deadend white collar one. His bosses are stuffy old bores, out of touch with the changing society but still fooling themselves that they govern by dint of their financial well-being and place in the class system. Just as Jimmy’s parents exist in a marriage that seems leeched of anything remotely resembling passion, Jimmy’s all-consuming obsession with Steph (Leslie Ash) – a check-out girl with the casual glamour and insouciant attitude of a silver screen goddess – is adds up to something equally meaningless after she leads him on with a quick knee-trembler then drops him like a hot coal. Just as Jimmy’s bosses are fusty old men, his hero, the charismatic gang leader Ace Face, is finally revealed as a bellboy jogging around in his silly little uniform at the beck and call of those selfsame fusty patriarchs.

When Keith Moon’s comedic vocal on ‘Bellboy’ is supplanted by Daniels – given the role of a lifetime at the age of 19 and tearing into with real hunger – screaming “BELLBOY! BELLBOYYYY!!!” it’s a raw and unforgettable moment of absolute disenchantment. That scene alone would secure ‘Quadrophenia’ a place in the annals. But it’s what happens next – in Jimmy’s attempt to outrun his past, his lack of a future, the self-destructive result of all of his strivings for individuality, and the failure of everything he believes in – that makes the film truly iconic, truly powerful, truly unforgettable.
Posted by Neil Fulwood at 10:10 PM