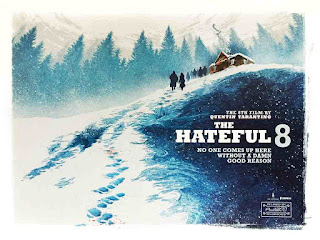 In 1967, Roy Orbison starred in his one and only film: a lightweight and gimmicky western called ‘The Fastest Guitar Alive’. It wasn’t a successful endeavour for anyone concerned. Orbison wrote a passel of bland songs for the soundtrack, only one of which – ‘There Won’t Be Many Coming Home’ – had anything specific to say. The producers, concerned that it was too serious and not in keeping with the film’s lighthearted tone, removed it. Forty-eight years later, Orbison’s civil war ballad is restored to the soundtrack of a western. A Quentin Tarantino western. And if the producers of ‘The Fastest Guitar Alive’ thought it sounded too serious in that film, it comes off as downright flippant here. Tarantino’s use of the Orbison song is the final irony in a 70mm epic that spends three hours bristling with irony, righteous anger and the kind of wallowing self-indulgence that characterises its director's approach to filmmaking.

Now, regular readers of this irregularly updated blog (I tries, folks, I really does) will know that I’m a dyed-in-the-wool Tarantino fan. I can entirely appreciate why people don’t dig his work, and completely sympathise with those whom it renders decidedly uneasy. But, because of a number of interrelating vectors, from being blown away by ‘Reservoir Dogs’ at the impressionable age of twenty, to meeting the man himself two years later when he was guest of honour at the Broadway Cinema’s Shots in the Dark festival, the trajectory of my cinephilia has progressed in tandem with Tarantino’s career. He’s the only director whose entire filmography I’ve seen on the big screen.

So, yes: I likes me some Tarantino. I even like ‘Death Proof’. And I don't edge uneasily back from his work, convinced he’s a racist because his scripts use the N-word. No racist would gift such iconic parts to black actors. What I’m not sure about, however, is his attitude to women, and nowhere have I had such doubts than with ‘The Hateful Eight’. Reader, I’m going to come straight out with it: ‘The Hateful Eight’ is the first time I’ve come out of a Quentin Tarantino film not quite sure what to make of it.

It’s been about a week since I saw the film and the more I think about it, the more I’m tempted to narrow down my rationale to one of two options:

1) Tarantino, deciding that his usual critics will accuse him of racism anyway, structures a three-hour roadshow epic in such a way that his audience will be sent stumbling into the intermission in the immediate aftermath of an almost Shakespearian soliloquy, delivered in half-mocking-half-menacing fashion by Samuel L Jackson, the (ahem) thrust of which is the phrase “big black dingus”;

2) It’s a remake of ‘Reservoir Dogs’ disguised as a remake of John Carpenter’s ‘The Thing’ with Kurt Russell in the Kurt Russell role and a certain interchangeability between Jennifer Jason Leigh and Channing Tatum as regards the role of the thing.

Either way, it’s a film of two halves. The first documents the stormy stagecoach journey that brings bounty hunter John Ruth (Russell) and his shackled charge Daisy Domergue (Leigh) – the running joke about the mispronunciation of her surname is the script’s subtlest aspect – to Minnie’s Haberdashery en route to the town of Red Rock (aficionados of ‘Django Unchained’ won’t be surprised at the ‘Blazing Saddles’ homage). En route, Ruth reluctantly ends up giving a lift to fellow bounty hunter Major Marquis Warren (Jackson) and Red Rock’s sheriff-to-be Chris Mannix (Walton Goggins). Arriving at their stop, Ruth and Warren are suspicious that Minnie (Dana Gourrier) and her husband and business partner Sweet Dave (Gene Jones) are nowhere to be seen and the establishment has been left under the stewardship of taciturn Mexican Bob (Demian Bichir). Also at Minnie’s, seeking shelter from the storm, are dandy English hangman Oswaldo Mowbray (Tim Roth) – the proximity of the character’s name to notorious blackshirt Oswald Mosley cannot be coincidental – enigmatic cowboy Joe Gage (Michael Madsen) and doddery Confederate General Sandy Smithers (Bruce Dern). What follows is a series of variations on a theme, the theme being how downright fucking loathsome all of these individuals are in their own special way. Racism, snobbery, intransigence, intolerance and the deep social, political and geographical divisions created by the civil war all come to the fore. At one point, various parties suggest that the cabin itself be divided in two (I couldn’t help but think of the ‘Steptoe and Son’ episode where Albert and Harold reduce the family home to a microcosm of apartheid) as a temporary alternative to killing each other.

The second half is marked by at least two tonal shifts, the first of which is done to brilliant effect. The linear, classical storytelling of the first half goes out of the window, to be replaced with voiceover, flashbacks, shifting perspectives … basically, the whole non-linear playbook that Tarantino has delved into with zero restraint throughout his career. For approximately half an hour, ‘The Hateful Eight’ morphs into an Agatha Christie locked room mystery, with Warren in the Miss Marple role, if Miss Marple packed a pair of pistols and everyone in St Mary Mead used the word “nigger” like it was going out of style. This, for me, was easily the most focused part of the proceedings and I could happily have watched “Samuel L Jackson in a drawing room mystery with swearing and pistol whipping” for the rest of the movie; however Tarantino curtails this section with a short sharp shock of a rug pull, immediately seguing into an extended flashback that manages to be sweatily tense even though we all know, by this point, exactly how it’s going to play out.

Then we’re back to the present and the final act. Which is where the film seems to start juggling desperately – it’s a state of the nation piece; no wait, it’s an essay on how ideology deflates in the face of survivalism; no wait, it’s a variation on the theme of “my enemy’s enemy is my friend”; no wait, it’s a Corbucci checklist replete with amoral cynicism and violence against women; no wait, it’s an ugly ironic statement on how liberal hand-wringing for interracial tolerance is founded on the big self-delusion of the liberal hand-wringer wanting to feel better about themself – and never fully commits to a final statement. Maybe this is what Tarantino intended. Or maybe he just decided that America – and by extension the world – is fucked and the best we can do is laugh at the sheer absurdity of it while we pointlessly kill each other.

Whichever, this is Tarantino we’re talking about and the man couldn’t do existential despair if he binged on Bergman, Tarkovsky and Tarr for a year. And that’s what gives ‘The Hateful Eight’ its wilful perversity: never mind the unpleasant places it goes, Tarantino’s sheer exhilaration in the process of film-making is splattered across every frame like a valentine’s love heart made of blood squibs.
Posted by Neil Fulwood at 10:55 PM

I loved The Hateful Eight, as you said, I also came out of it not exactly sure what to make of it. Was it mysoginistic? Racist? Violent? All of the above? What was it truly about? Tarantino I think made it so we couldn't exactly figure out what it was truly about, probably because as you also mentioned in your review, it was about many things at the same time. Still, there's no denying its an extremely Tarantino movie, the typography used for the title, the music, the dialog...and the breaking of cinematic rules, loved that about it. I mean, how cool was it to realize it was Tarantino's own voice narrating the story to us? Cool movie, also, kudos for making it so old fashioned, filming in extreme locations and weather, making it so theatrical.

Also, Domergue was pure evil...did she deserve to be slapped around the way she was? Hmmm....i think Tarantino was saying that females have the capacity of being just as evil as men!

Hi, Francisco. Thanks for commenting. I'm still thinking about the movie almost a month after I saw it, and looking forward to buying it on DVD. The screening I went to didn't have Morricone's overture, or the intermission, and I really want to own the movie in the most complete version possible.

Using 70mm for what was mostly a locked room mystery in a single location was an almost wilful act of perversity. I can't think of many other filmmakers who'd have the balls to do that.

I totally agree with your assessment that Tarantino was purposefully making the film difficult to figure out; so much is going on, and the morality is so muddled - Samuel L. Jackson's character protests white-against-black racism, but then makes racist comments about Mexicans - that you really have to come to terms with your own reactions to the film.