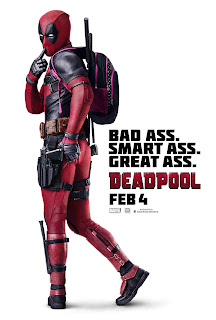 Remember that scene in ‘Avengers: Age of Ultron’ where Iron Man uses the word “shit” and Captain America admonishes him for his language? Captain America would diarrhoetically obliterate his patriotic wank suit and have to mop up his star-spangled spew based on the opening scene of ‘Deadpool’, never mind the whole 108 profanity laden, PC-felching minutes of it. (And can I just say: thank you, mainstream American studios, for finally making a superhero movie that’s (a) adult-orientated, (b) funny, and (c) less than two and a quarter arse-numbing hours long.)

According to the opening credits, ‘Deadpool’ is a film directed by An Overpaid Tool and starring God’s Perfect Idiot, A Hot Chick, A British Villain, The Comic Relief, A Moody Teen and A CGI Character. Said credits are only a couple steps down from providing a bona fide synopsis. Let’s take care of that business:

Wade Wilson (God’s Perfect Idiot) is an ex-Special Forces nutjob reduced to doing “babysitting jobs”, hobnobbing with favourite barman Weasel (The Comic Relief) and frequenting strip joints. One day he meets the sassy and seductive Vanessa (A Hot Chick) and sparks fly: the banter is badass, the chemistry is chimerical, and the sex is sensational. But as Wilson himself would be the first to admit, pleasant interludes are just that – interludes – and the general shittiness of life is always waiting in the wings. In this case, it’s Wilson’s terminal cancer.

Reluctantly responding to an overture from a secret cabal seeking to configure latent mutants into super-soldiers, Wilson finds himself in the clutches of Ajax (A British Villain) who puts him through hell in order to activate him. It should be noted, at this point, that ‘Deadpool’ exists within the ‘X-Men’ timeline, though Wilson happily breaks the fourth wall to wonder whether Xavier is being played by Patrick Stewart or James McAvoy, admitting that he can’t keep track of the timelines.

Fourth wall. Let’s talk about the fourth wall. The main set-piece in ‘Deadpool’ has Wade, now reconfigured as the eponymous definitely-not-a-superhero, dispatch a fuckton of bad guys on a freeway bridge while two members of the X-Men try to dissuade him from further carnage; the origin story that the movie essentially is plays out as a series of flashbacks. During said flashbacks – hell, during the main action – Deadpool breaks character on numerous occasions and delivers pithy homilies directly to the audience. At one point, he breaks the fourth wall in order to facilitate a flashback, during which he breaks the fourth wall, an act which gives him leave to muse upon how many walls he’s broken – sixteen?

Sorry. I got distracted again. But it has to be said: ‘Deadpool’ finds an aesthetic centre to its world-building that all other superhero movies lack. Granted, this predominantly equates to hyper-violence, bad language and nudity. And yet all of these attributes are somehow truer to the essential emotional/intellectual retardation that defines the popularity of comic books than any of Captain America’s square-jawed jingoism or Thor’s mythic nobility. Hell, even the raging uncontrollability of the Hulk is less a realistic depiction of the creature from the id than Deadpool going home after a hard day’s mayhem and blood-letting and slipping on his “masturbating shoes”.

Yeah, you can imagine Tony Stark partying with Victoria’s Secret models or the Black Widow squeezed into skintight leather. And you don’t even have to imagine Mystique naked as long as blue skin isn’t a problem for you. But who else other than Deadpool would even admit to polishing the lighthouse let alone elevate the act to dimestore poetry?

Incidentally, is anybody still reading this review? Because if you are, quit wasting your time and get your arse down to your nearest multiplex. There’s a guy in a red suit with a foul mouth and a taste for strippers, alcohol and cartoon violence who’s just jizzed to make your acquaintance. Tell him Agitation sent you. PS. Look out for the unicorns. I’ll say no more than that.
Posted by Neil Fulwood at 10:17 PM

I have just installed iStripper, so I can have the hottest virtual strippers on my taskbar.

If you want your ex-girlfriend or ex-boyfriend to come crawling back to you on their knees (even if they're dating somebody else now) you gotta watch this video
right away...

(VIDEO) Why your ex will NEVER get back...