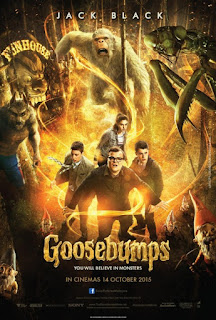 Any adaptation of R.L. Stine’s multi-million selling ‘Goosebumps’ series has one question to ask to ask itself from the outset: which story, or conflation of stories, from the 200-odd ‘Goosebumps’ titles the tirelessly prolific author has penned? Darren Lemke’s script, from a story by Scott Alexander and Larry Karaszewski, wisely sidesteps the problem of straightforward adaptation and instead crafts the whole movie about Stine himself.

But it wouldn’t be a tale worthy of the franchise’s name if there weren’t a couple of plunky teens on protagonist duties. Step forward plunky team number one, Zach (Dylan Minette), newly moved to the town of Madison, Delaware, where his mother Gale (Amy Ryan) has taken the post of vice principal at the local high school. Not only saddled with this source of social embarrassment, never mind being the new kid in town, Zach also has to contend with the mortifying attentions of both his aunt Lorraine (Jillian Bell) – who is delusionally convinced that she’s down with the kids – and neighbourhood nerd Champ (Ryan Lee), who singles him out as his new (actually only) friend.

Zach’s woes are alleviated when he meets plucky teen number two, Hannah (Odeya Rush), his neighbour’s daughter and something of a social pariah herself thanks to her father’s over-protectiveness. When Zach and Champ intercede in what they think is a domestic disturbance at Hannah’s house, he discovers her reclusive and anti-social father is R.L. Stine (Jack Black). A bookcase full of leather-bound original manuscripts of the ‘Goosebumps’ novels, which Champ remembers from his childhood, catches their attention. What they don’t know is that Stine’s retinue of monsters is real, his writing the only thing that can subdue them, the lock on each manuscript a guarantee that they’ll stay imprisoned within the pages of fiction.

Needless to say, Zach and Champ are the unwitting architects of the release of one of the monsters – an abominable snowman type who, with Hannah’s help, they track down to an ice rink. In the meantime, however, and much to Stine’s chagrin, his lifelong nemesis and alter ego, ventiloquist’s dummy Slappy, wrests free of his particular magnum opus and gleefully sets about freeing all the other monsters.

At which point ‘Goosebumps’ turns into the best movie that Joe Dante never made. It’s very reminiscent of Dante’s own ‘Gremlins’: small town, pint-sized terrors, abject chaos and a cute couple to whom it falls to save the day Did I say pint-sized terrors? Well, some of them are – particularly the gnomes (they’re the single best thing in the film) – but the werewolf and the giant praying mantis present problems on a considerably larger scale. Madison’s police force is swiftly proves useless. The high school is just as quickly besieged. A cemetery provides an apposite backdrop to a spooky revelation about Hannah. An abandoned amusement park now overgrown by woodland is the perfect stage for the big finale. Director Rob Letterman knows his genre and exploits all of this to the full.

Black, his performance thawing from misanthropic to merely prickly during the course of the film, turns in his best work since ‘School of Rock’. Minette, saddled with a bit of a non-character, is likeable enough and it helps that there’s a nice low-key chemistry between him Rush, who turns in a winning performance. Kudos also to Lee who forges a character rather than just playing Champ as the butt of the script’s jokes.

True, there’s nothing going on here that you haven’t seen before, but Letterman is canny enough to wear his influences on his sleeve, dealing out in-jokes and viewer-friendly genre tropes with the panache of a cardsharp. He’s also confident in his special effects department, knowing that the monsters, more so than his headliner or his attractive young cast, are the real stars of the show. Slappy (voiced by Black, just to reinforced the alter ego aspect of the character) is genuinely mocking and malevolent. The abominable snowman and the giant mantis benefit from a real sense of scale and physical destructiveness. The werewolf is a snarling, salivating beast. And, as I may have hinted already, the gnomes are just fucking brilliant. In fact, the gnomes walked away with the Agitation of the Mind “man of the match” award the first scene they were in.

The more I think about it, the more the gnomes emerge as a metaphor for the film itself: they’re a bit creepy, a bit silly, eminently entertaining while you’re watching and if everything’s just a shade forgettable a day or two later, does it really matter if you enjoyed yourself for an hour and three quarters in the cinema?
Posted by Neil Fulwood at 9:27 PM