Batman vs Superman: Dawn of Justice 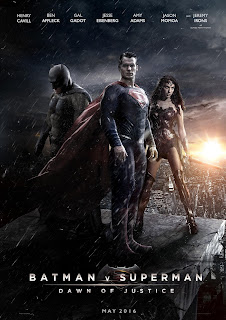 ‘Batman vs Superman: Dawn of Justice’ is no classic. Let’s be completely honest about that. It’s as flawed as ‘Man of Steel’ was. Some of it works and some of it doesn’t. The things that don’t work – in particular matters pertaining to Lex Luthor – are hugely awful. The things that do work – in particular matters pertaining to Diana Prince – are as iconic as any fanboy could wish for. The film is a mishmash, and narratively wonky. But does it deserve the outpouring of hatred that the critics have almost unanimously delivered? In my humble opinion, no.

Which isn’t to say that, having emerged from the cinema with a general feeling of I enjoyed that more than I thought I would, I’m going to fashion this review into not just an apologia for ‘B vs S’, but reappraise it as a misunderstood classic of the genre. No, sir. It would be remiss of any reviewer to gloss over the film’s problems, just as it’s lazy of the majority of them to join in the hurling of brickbats.

In the interests of objectivity and balance, let’s acknowledge the faults. First and foremost, the characterisation of Lex Luthor is terrible, partly because Jesse Eisenberg is miscast but mostly because the script (a) gives him some of the most thankless dialogue any actor could find himself saddled with, and – more problematically – (b) fails in establishing any credible motivation for his increasing sociopathic behaviour. And, no, his oft-repeated variations on a theme of man’s victory over God doesn’t really cut it since there’s no moment in his character arc that leads him to this mindset. In fact, he doesn’t even have a character arc. It’s as if the first script conference settled on Lex Luthor as villain based on the rationale that everyone knows he’s the villain anyway so let’s just wheel him onstage and give him villainous things to do and we won’t need to bother with any of that tedious exposition business.

Likewise, the titular Batman/Superman conflict is predicated on very little. Sure, there’s the effective opening sequence where the finale of ‘Man of Steel’ is restaged from Bruce Wayne (Ben Affleck)’s perspective as he navigates rubble-strewn and dust-choked streets in an attempt to facilitate his employees’ evacuation while Superman (Henry Cavill) and General Zod twat each other in an orgy of city-wide destruction and wait a fucking minute, since when exactly was Wayne Industries based in Metropolis? So, yeah, the ultimate superhero anti-hero, a man who was wreaked his fair share of havoc in order to take down bad guys, suddenly goes all antagonistic on Superman because he wreaked havoc in order to take down a bad guy.

Meanwhile, Clark Kent pursues a media campaign against Batman for little other reason that it gets him off the sports desk. Though why he spends his time at the office getting all moody and embittered when he’s shacked up with the uber-foxy Lois Lane (Amy Adams) is anybody’s guess. Ditto why Lois continually puts her life in danger chasing down stories when she’s just as loved-up herself.

Finally: the flashbacks/dream sequences. They’re piss-poor, on both a conceptual and aesthetic level. Really, really piss-poor.

And if you took ‘B vs S’ on the 500 words above, the critical kicking would be easy to understand; in fact, you’d probably feel like grabbing a burning touch and allaying yourself with the village lynch-mob. But said course of behaviour would leave one blind to the pleasures of the film. To whit:

Ben Affleck as Batman. I’ll cop a guilty plea, right here and right now, to face-palming and groaning when I heard the news of Affleck’s casting. And by the same chalk I’ll hold my hands up and admit that I was wrong. Trudging through the metaphorical treacle of a script that can’t even establish a fundamentally plausible motivation for his character, Affleck nonetheless knocks it out of the park in his portrayal of a Batman who is middle-aged, world-weary and descending into an embittered psychosis. This is a not just a Batman who, prior to the titular stand-off, has to force himself through a masochistic training regime and build an armoured suit that it’s effortful even to walk in (in fact, there’s something about seeing the un-suited-up Bruce Wayne pounding at a truck tyre with a sledgehammer that presents an anti-iconography: the training montage actually strips a superhero down to a new personal low), but Affleck is just as acute in his characterisation of Bruce Wayne, showing a jaded multi-millionaire going through the motions of what society expects of him; even the playboy lifestyle and womanising seems forced, to the point where Alfred sneers at him that there’s little hope for a next generation.

Subject of whom: Jeremy motherfuckin’ Irons. Hot on the heels of his fantastic turn in ‘High-Rise’, he reinvents Alfred to his own specifications within seconds of appearing onscreen. Retaining the Jeeves-like pragmatism of the character’s previous incarnations, Irons adds a level of barbed irascibility and the result is magnificent. In fact, I’d give Irons the Agitation of the Mind “man of the match” award if it weren’t for …

… Gal Gadot as Diana Prince/Wonder Woman. Introduced in oblique fashion, with much of her narrative arc and motivation remaining enigmatic for most of the running time, Gadot isn’t given much to do but look slinky and seductive as Prince and wield a sword in menacing fashion as Wonder Woman. Given the script’s total inability to treat a female character as anything other than a plot device, Gadot could easily have come adrift in the melee, her character mere eye-candy in the CGI-driven morass of the final act. But, by God, a former model who I wouldn’t have previously credited as having any claim to cinematic iconography doesn’t just make something out of nothing, she creates bona fide moments of mainstream cool.

Other plus points: Snyder’s commitment to a dark vision of the material – slammed by the critics for humourlessness – yields some genuinely striking moments: the film begins and ends with funerals (Snyder shoots funerals with the same quasi-pornographic delight that Argento at his best reserved for death scenes); Wayne’s contact with a Russian mobster takes place at a grungily ugly bare-knuckle boxing competition; Superman’s coercion into appearing at a congressional hearing is the culmination of a subplot about political showboating/careerism and is full-stopped by a hugely cynical punchline almost calculated to plug into contemporary America’s terrorism fear-factor. Snyder plays it equally dark and cynical in terms of classical allusions, throwing in Icarus, Parsifal and a painting in Luthor’s apartment that’s basically a combination of Gustav Dore and William Blake; there’s even a dream/hallucination sequence where Kevin Costner reappears as Clark Kent’s mortal step-father, staged in such a manner that short of inserting a title card reading “and my father on that sad height” the nod to Dylan Thomas couldn’t be more explicit.

And this is perhaps what ‘B vs S’ offers as an apologia for itself even in the face of its harshest critics. In an era where superhero movies – specifically those of the Marvel ilk – have come to define mainstream cinemagoing, Iron Man and Captain America might flirt around the edges of prescient storylines about the corrupting influence of power and the fear of the unknown, but you’re highly unlikely to stumble across a classical allusion or a debate on the very redundancy of heroism; whereas Snyder, carrying on the dialogue he established in ‘Man of Steel’, batters furiously and incessantly away at the very concept of the genre even as he embraces its most fetishistic excesses.
Posted by Neil Fulwood at 11:32 PM