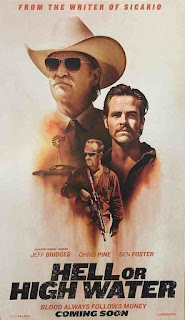 About halfway through David Mackenzie’s lean and introspective crime thriller, Texas Ranger Marcus Hamilton (Jeff Bridges) and his much put-upon half-Indian/half-Mexican partner Alberto Parker (Gil Birmingham) – “I’ll get to the Mexican when I’ve used up the Indian insults” Marcus avers in a moment of breathtakingly casual racism – decide to take a hands on approach to the series of bank robberies they’re investigating and stake out one of the handful of branches of the Texas Midland that hasn’t been targeted yet. During their stay at the economically depressed small town said branch caters to, Marcus and Alberto take in the delights of the most depressing motel this side of ‘Vacancy’ and a restaurant whose menu is marginally less limited than its waitress’s customer service skills. As their sojourn drags on, Hamilton playing out his string as an avoidance technique (his mandatory and unwanted retirement is imminent), they get to discussing small town life. Marcus can see a kind of dimestore poetry to it; Alberto is scathing: “Everything in the hardware store costs twice as much as Home Depot and there’s one restaurant with a rattlesnake for a waitress.”

This, more than any of the billboards advocating high-interest loans or debt management services that various characters drive past, pins down the subject Mackenzie and scripter Taylor Sheridan (‘Sicario’) are putting under a microscope. Or should I say that they’re putting it under a microscope, leaving the microscope out in the sun, sitting back with a patience and a commitment to slowburn narrative that evoke the best of 1970s American filmmaking, and letting it squirm for a while.

Here’s another line, prominently featured in the trailer, which pretty much serves as mission statement. Marcus and Alberto are in a diner the perps ate at before a robbery. Marcus takes a good-ole-boy approach to ingratiating himself with the regulars and sounding them out: “How long y’ been living here?” “Long enough,” one of them replies, “to see a bank get robbed that’s been robbin’ me for thirty years.”

Some bank heist movies key into the Robin Hood-style romanticism of the outlaw lifestyle (‘Bonnie and Clyde’), some are studies in logistics and fall-out (‘Heat’), some use the heist as a jumping off point for revelations and political machinations (‘The Bank Job’) and some are laconically subversive (‘Thunderbolt and Lightfoot’). Now there’s a thought: watch ‘High or High Water’ on a double-bill fronted by ‘Thunderbolt and Lightfoot’: Bridges at the start of his career playing the charismatic wiseass, and Bridges in the maturity of his career, giving a definitive study of ageing, regret and almost sealed-off vulnerability. But I digress. ‘Hell or High Water’ is a bank heist movie where the mechanics of the heist are secondary (though still well-observed: the burial of the various getaway cars is an inspired touch) to the particular branches that get robbed.

It’s no spoiler to introduce our two stick-up merchants: brothers Toby (Chris Pine) and Tanner (Ben Foster) Howard. Toby’s divorced, little contact with his two children and not much going for him. Tanner’s been in and out of jail his entire adult life, no meaningful relationship, no future, and quite frankly even fucking less going for him. Hence his willingness to partner up with his bro for a series of heists engineered to steal small but untraceable sums, the aim being a pot of money that satisfies the bank who are a week away from foreclosing on their late mother’s farmstead, a property that is apparently a source of oil. Toby’s intent is to regain ownership of the land and leave it in trust to his children – to do, in essence, one good thing in a life otherwise defined by failure. Tanner? Well, he just seems to enjoy it.

The brothers have a system worked out: rob bank, hit casino, convert stolen money into chips, play just enough to earn a bit more or lose within acceptable levels, then cash in said chips for a cheque made out to the very bank they fucked over. Crime with a sense of irony. What’s not to love?

What makes ‘Hell or High Water’ fascinating is that neither Toby or Tanner actually stand to make anything out of the heists beyond being able to buy back their birthright. Which is an abject shithole, oil or no oil. Toby wants to shore up the future for his offspring whom he’d previously failed. Toby, as another character says of him, could make enough from a single heist to park a brand-new pick-up truck and a jet-ski in front of his house for no other reason than to spend it all so that he has to go out and steal more money.

In this respect, although the aesthetics of small town Americana are writ large, ‘Hell or High Water’ can be readily identified as the work of a British director. This is the heist movie for the age of austerity. You could transpose the whole thing to the septic sceptred isle relatively easily. Bridges would be the Little England bigot not quite ready to retire to the Costa del Sol (and therefore be a significantly interesting character), and the banks would be, well, the banks.

But maybe I’m stretching a point. As much as ‘Hell or High Water’ seems like a parable for austerity Britain, it’s also chillingly easy to read it as prescient of an America under Trump. A scene where Toby and Tanner deal with armed resistance at a bank swiftly and decisively only to escape getting shot to pieces by a hare’s breadth as they hotfoot it outside and a bunch of townsfolk make like it’s the Alamo all over again is as effective a commentary on open-carrying as you’re likely to see. It’s a scene that evokes the intervention of the pick-up driving fascist rednecks that utterly and irreversibly changes everything in the final season of ‘Breaking Bad’. It’s a scene that culminates in said townsfolk changing their minds the moment the odds are recalibrated. And it’s a scene that entirely hinges on the American love affair with weaponry.

Yet there’s nothing gung-ho about the film. Sure, it depicts machismo; Mackenzie and Sheridan are acutely aware of how men behave around each other – not to mention how abjectly they regard women. (Arguably only Toby transcends this failing, but to talk about the dynamics of a scene towards the very end of the film would be to indulge in a spoiler too far.) Everything – tone, pace, performances, visuals – testifies to how much thought and consideration went into ‘Hell or High Water’. Even a sudden lurch into ‘High Sierra’ territory pays off in a manner that is more evocative of Tommy Lee Jones’s contemporary anti-western ‘The Three Burials of Melquiades Estrada’ – a film I’d have no hesitation in ranking this one alongside.
Posted by Neil Fulwood at 10:25 PM