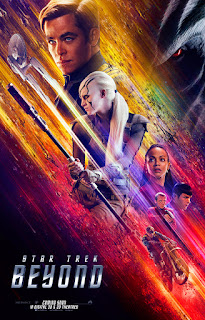 From the outset, let me say that I wasn’t all that keen on the first two films in the rebooted franchise. In fact, I’m not that keen on J.J. Abrams as a filmmaker, period. (I’ll give him a pass for ‘Super 8’ but that’s more to do with how likeable its young cast is.) But even then I wondered how much of a trade-up it would actually be to have Justin Lin in the director’s chair … beyond, y’know, a better facility with action scenes and no fucking lens flares.

Turned out it could have been more or less anyone in the director’s chair; what makes ‘Star Trek Beyond’ the best instalment by a mile in the new timeline is Simon Pegg as co-writer of the script. He’s canny enough to keep the banter and interaction between the half dozen central characters to the forefront, and ensure that it’s their ingenuity and camaraderie which provides a response to the immediate threat rather than a rush of effects-driven techno-babble.

Not that the CGI doesn’t show off the budget to the full, particularly in an extended sequence where a rescue mission turns into a battle for survival and the USS Enterprise comes under attack from a ferocious and seemingly indestructible enemy. In short order, the starship is ripped apart, the command deck saucer crash lands in hostile territory, escape pods are swiped out of the sky and their occupants imprisoned, and Kirk (Chris Pine), Spock (Zachary Quinto), Bones (Karl Urban), Chekhov (Anton Yelchin) and Scotty (Pegg) find themselves split up behind enemy lines, the latter making contact with Jaylah (Sofia Boutella), a scavenger who has managed to evade the hostile forces.

And the hostile forces in question? Well, they’re under the command of Krall (Idris Elba, submerged under prosthetics), who wants to get his hands on a superweapon and wreak havoc on the nearby Yorktown, a Federation starbase that’s an orgasm of production design. Seriously, think Larry Niven’s Ringworld as designed by M.C. Escher. And why does Krall want to unleash hell on this peaceful and dizzyingly detailed settlement? Because he hates the Federation for their philosophy of unity and cooperation, and feels the only way forward is a doctrine of inward-looking fascistic aggressiveness. Which kind of makes ‘Star Trek Beyond’ a sci-fi Brexit parable with the Federation as the EU and Krall as Nigel Farage only more photogenic and in possession of opposable thumbs.

Or maybe I’m reading too much into it. Either way, what ‘Star Trek Beyond’ has is spades is fun (the dialogue zings where in the previous outings it was leaden and self-important) and a genuine sense of adventure. After all, this is a ‘Star Trek’ film which opens with a captain’s log that basically features Kirk going “I’m really really really bored” and even when, quarter of an hour later, his ship’s getting trashed and the odds are overwhelming, Pine conveys a real sense that Kirk would rather be at the epicentre of chaos than doing so paperwork and having an early night.

Speaking of Pine, a combination of script and performance lifts his characterisation of Kirk from annoying wiseass to someone you can actually root for. The rest of the cast do dependable work, though I found Urban – an actor I generally have a lot of time for – somewhat more stilted in his performance than previously. That, however, is my only real gripe.

Well, that and the absence of a semi-colon from the title. But then again ‘Star Trek’ revels in the most famous split infinitive in history, so maybe the Federation has no place for grammar Nazis, and that’s fair enough. This particular pedant had more fun with this movie than other summer tentpole offering this year, so here’s to more Trekking with Lin at the helm and Pegg on writing duties – and, gentlemen, you can do what you like with the English language.
Posted by Neil Fulwood at 10:20 PM