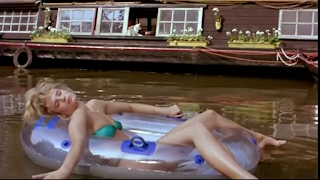 A few things about the giallo that we can probably all agree on:

3. Italians owned the giallo in the same way they own grand opera, pasta dishes and spaghetti westerns. 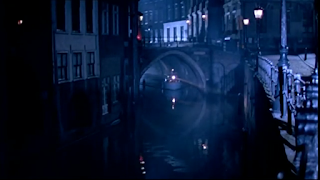 Which puts us in awkward territory with ‘Amsterdamned’, which was made in 1988, preserves time-capsule-stylee everything that was hideous about said decade, was helmed by a Dutch director and features a tenacious and proficient policeman as its protagonist. Conventional wisdom would have it that ‘Amsterdamned’ is on a hiding to nothing from the outset. Let’s face it, not only is it called ‘Amsterdamned’ (which is a fucking horrible title), it’s directed by Dick Maas, the talent behind some dodgy Golden Earring videos and the ‘Flodder’ trilogy.

Well, slap me with psychedelic tulip if ‘Amsterdamned’ didn’t turn out to be a cracking thriller, properly lurid in the right places, and with a propulsive narrative that even the least convincing romantic giallo subplot this side of ‘Blood Stained Shadow’ can’t derail.

The film begins with a synth-heavy score, some heavy breathing and an extended POV sequence as someone or something navigates Amsterad’s canal system, occasionally surfacing and then slipping back into the murky waters: someone or something exploring, spying, looking for a victim. Said victim eventually suggests herself in the form of a sex worker who’s just been kicked out of a taxi for refusing to service the driver. She’s later discovered, suspended from a bridge, when a tour boat literally bumps into her corpse. 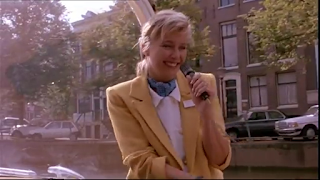 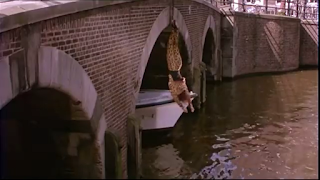 Single parent and inveterate ladies’ man Inspector Eric Visser (Huub Stapel) is given the case and does his best to proceed from one lead: a bag-lady who witnessed the killing and describes the perpetrator as “a monster”. Not much to go on, there. Another attack swiftly follows: two environmentalists clandestinely doing water tests near a sewage plant are viciously despatched. Suddenly Visser’s boss, under pressure from the mayor (himself shitting a brick at the potential negative impact on tourism), is demanding immediate results, and Visser finds himself teamed with River Police diver John van Meegeren.

Meegeren used to be involved with Visser’s wife before she upped and left him for someone else, also walking out on their teenage daughter Anneke (Tatum Dagelet). Why this backstory is so laboriously introduced is anyone’s guess, since Visser and Meegeren proceed to work together in a professional and productive manner. Indeed, it’s Meegeren who intuits that the killer is a diver himself, a deduction that sends Visser on a whistlestop tour of the city’s diving clubs. Which is how he meets Laura (Monique van de Ven). 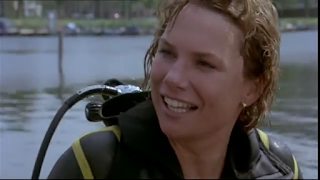 Laura’s coping with the death of her husband via therapy from Dr Martin Ruysdael (Hidde Maas), who also serves as her consort. Ruysdael, it turns out, was a former member of this particular diving club but gave up the sport several years earlier after a diving accident that befell a close friend of his, and if that bit of information doesn’t make you prick up your ears then you haven’t seen anywhere near enough crime movies, let alone gialli.

Dick Maas establishes a good pace for the film’s procedural elements, keeping things on the boil for the first forty minutes or so (the film clocks in at just under two hours), then ups the ante with the first of a series of full-tilt and genuinely exciting chases. As ‘Amsterdamned’ progresses, Maas moves from foot chases to car/bike chases before finally cutting loose with his big set-piece: a seven-minute speedboat chase that puts the opening sequence of ‘The World is Not Enough’ utterly to shame. 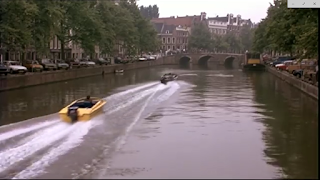 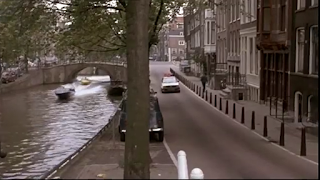 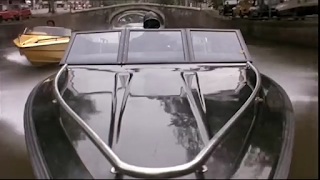 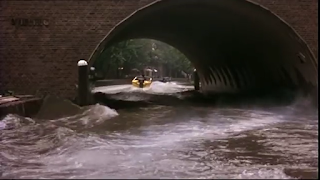 And when that bit of business concludes, he immediately propels Visser into a tense bit of cat-and-mouse in the sewers, before pulling an effective (if somewhat obvious) false reveal and steering Laura into an obligatory woman-in-peril scenario. But even here, Maas has Laura make the wrong decision based on what little information she has at that point, rather than just behaving in bimbo scream-queen fashion purely because that’s what the script demands.

Indeed, Maas seems authentically engaged with character dynamics – in particular, the scenes between Visser and Anneke, all spiky back-and-forth that masks their familial affection, are a joy – and has the confidence to incorporate them without drifting into mawkishness or holding up the plot.

‘Amsterdamned’ may not offer any real surprises – there’s no earth-shaking denouement that forces a reappraisal of the film entire a la ‘Deep Red’, no melding of sleaze and dark psychology a la ‘The Strange Vice of Mrs Wardh’, and no immersion in off-the-wall iconography a la ‘Footprints’ – but it remains a gripping and well-constructed example of its kind. It lays a claim to being the best giallo of the 80s, and it wouldn’t be till 2004 and Eros Puglielli’s ‘Eyes of Crystal’ that the genre hit a similar high point.
Posted by Neil Fulwood at 9:40 PM

You really need to do your research, old chap. I don't look like *any* of the ladies in the screengrabs. Or even the gentlemen, for that matter.